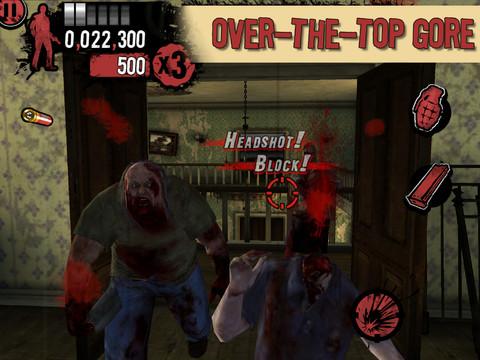 Picking the best modern zombie game would be no easy feat, but the original House of the Dead: Overkill for Wii (and its PS3 port) is most definitely up there. And no, I’m not just saying that because it holds the world record for the most curse words in a game. It’s an incredibly fun shooter, with a campy sense of style that draws inspiration from classic grindhouse films. House of the Dead Overkill: The Lost Reels sees the game making a trek to mobile, and despite a few hiccups, it does a good job of capturing its predecessor’s magic.

Before we discuss what’s different, let’s address the similarities. The Lost Reels retains the rail shooter gameplay of its predecessors, and even uses similar locations. Furthermore, the grindhouse style is intact, if a tad understated.

The primary difference is one of structure; The Lost Reels left a lot on the cutting room floor in its transition to iOS and Android. There are only three levels in the game, and one of them requires an in-app purchase of $1.99 to unlock. Additionally, there isn’t nearly the same level of cursing or crude humor. The game, as one might expect, compensates for this with mass amounts of zombie blood.

Each level contains five chapters, with the final chapter being a boss battle. In each one, you rush around an eerie setting (such as a hospital or dilapidated mansion) and shoot zombies like a madman or madwoman. You can choose to do so via touch controls or motion controls, and while both certainly work as advertised, I found myself far more attached to the touch controls. They offer a level of accuracy you rarely see in touchscreen-based shooters, and I was consistently landing headshots against incoming zombies.

The very best control scheme, though, is the one that’s unlocked once you finish story mode. Called Tap Frenzy, it lets you aim and fire bullets just by tapping on the screen.

Despite my Sick Headshot Skillz, The Lost Reels wasn’t necessarily a cake walk. There were moments in the later levels where I struggled to take out all the zombies before they reached me and reduced my life, which compelled me to take a trip to the in-game shop. I was able to afford most of the gun upgrades and other sundries I wanted just from what I earned while playing, but the option to spend real money on in-game cash was available. I decided against breaking out my credit card, and still managed to make my way through the game without much difficulty.

So far so good, right? The problem with The Lost Reels, ultimately,is its length. The two levels clock in at about a half hour each, and if the third level is as brief as they are, then $1.99 seems a tad steep. It’s too little of a good thing, which makes it hard to recommend. In general I support developers who charge a premium for a game on mobile, but there just isn’t enough here to justify the price. 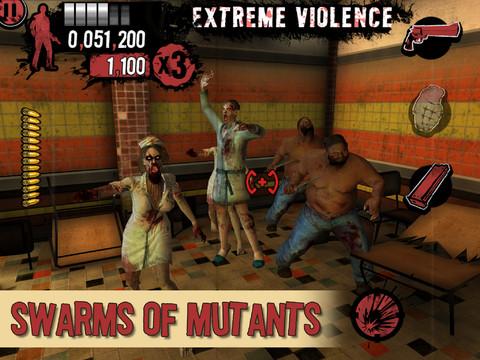 If House of the Dead Overkill: The Lost Reels had a little more zombie meat on on its bones, I’d be telling you to fire up the App Store and download it right away. As it stands, I’d say it’s best to wait for a sale ($2.99 would be a good price), or to go back and purchase either the Wii or PS3 version.