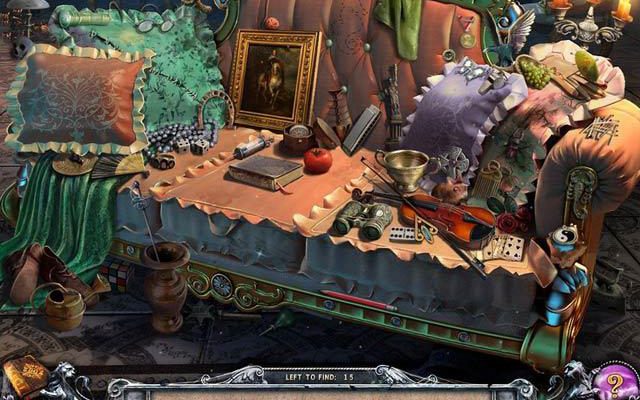 A washed-up writer receives an invitation to a seance and is pulled into a paranormal mystery.

The only thing worse than failure is success, as any has-been writer can tell you. House of 1000 Doors: Family Secrets stars just such a writer in a twist on the familiar hidden object adventure “save the souls” theme. While this version won’t blow the doors off the hidden object world creatively speaking, it does represent one of the more well made and intricately-designed games in the genre.

At the start of Family Secrets, once-successful author Kate Reed’s suffering some serious writer’s block. With no ideas on the horizon and her last success dwindling into the distance, Kate’s in the middle of a full-blown career crisis when a strange box appears on her doorstep. The box contains an unusual invite—to a séance, something Kate’s always dreamed of attending. Gladly abandoning her go-nowhere work, she jumps in a cab and zooms across town to find the so-called séance to be only a ruse—an entry point into an inter-dimensional mystery. 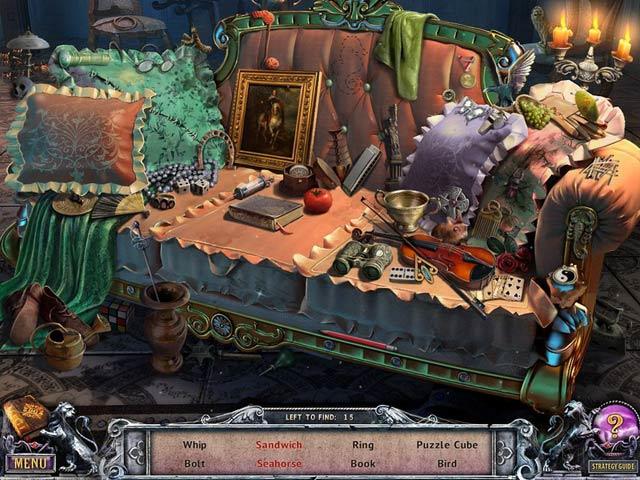 At the center of this mystery is the titular “House of 1000 Doors,” a supernatural structure that travels through time and space. This haunted habitation houses not only restless spirits of all stripes, but various gifted mediums who work to help these spirits move on to the next plane. Unbeknownst to her, Kate’s psychic powers make her a prime candidate for this trandscendental troupe, as her encounters with the strange denizens of the house quickly prove. Not only is Kate charged with helping the other mediums in the house figure their stuff out, she’s also asked to uncover a decades old murder and restore her dead grandmother’s sullied reputation. It’s a lot for one girl (or one gamer) to take on, but thanks to ease of use and slick presentation, the game’s complex design never becomes too daunting.

A lot of hidden object games take the ham-fisted, easy way out in terms of design. You enter a location, realize you need an item (a tool, a key) and then find that item by way of a nearby hidden object scene. House of 1000 Doors: Family Secrets takes that basic premise but weaves its puzzles, solutions, items and hidden object scenes into an amazingly complex web of interconnected occurrences. This makes the gaming experience feel more fluid and organic and the result is more a natural, cohesive narrative that feels as if it’s unraveling as you go, rather than being a series of scenes, clumsily cobbled together.

This intricacy of the game’s design is its main advantage but far from its only one. A cool mechanic that allows you to travel among dimensions makes for a lot of environmental variety and it’s easy to imagine this being used to good advantage in future House 1000 Doors titles. The graphics too are good (aside from the occasional mannequin-like character) and the voice acting used in the numerous cutscenes while not Oscar-worthy, manages to avoid being embarrassing. In addition, the game earns a big thumbs up for providing a clear, concise map which not only tells you where your objectives are, but allows you to teleport directly to them. 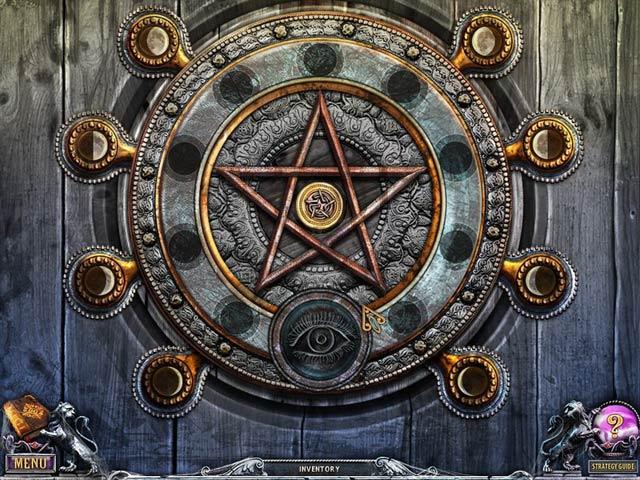 Of course like most games, House of 1000 Doors: Family Secrets is far from perfect. The first of its issues: originality. Helping troubled spirits go into the light is a highly overused hidden object theme (nearly as overused as the “evil theater/carnival/toyshop owner” theme). And with every third hidden object title being related to ghosts, the Five bn Alawar team could have done us a favor by coming up with a more creative story idea. Second issue? Unfulfilled potential. For half a second I thought the game was breaking new ground and taking a page out of the old school adventure genre by giving us a meaningful choice to make, but not so. After seeming to be offered a choice of ending, a specific ending is forced upon you, and it’s really disappointing. Finally, the game’s bonus chapter, while offering more good gameplay, feels narratively speaking, somewhat tacked on.

House of 1000 Doors: Family Secrets is a worthwhile, if not particularly unusual, hidden object adventure. Tinkering only a little with the popular ghost theme, it doesn’t stretch its, or our, imaginations in its approach to storytelling. Fortunately for us (and Alawar), this isn’t hard to overlook thanks to the game’s expert puzzle design, varied locations, clear objectives and easy navigation.