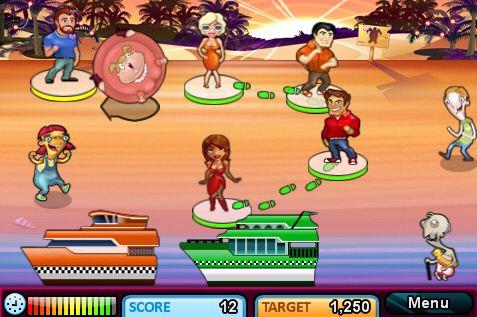 I must admit that I didn’t expect much when I started playing the Hottie Hookups iPhone game. I thought the name was a little off-putting. My daughter asked to play a game on my iPhone, and she saw the “Hottie Hookups” icon with the word “hottie” written over a big heart. She wondered if it was some sort of dating service (which is something weird for your married mother to be into). I assured her that it was a really fun new game, and now she wants my iPhone all the time so she can play it.

As the name implies, Hottie Hookups is about matching up beautiful people who are dancing solo in clubs all over the world. Hook them up by drawing lines to connect them. Then draw a line to get them to a taxi, and they take care of the rest. Sounds simple enough, right? Well, just like a high school dance, the nerds are around to try and thwart your match-making efforts. As you can tell, this game is not politically correct, but it is all in good fun. The “hotties” are the beautiful couples of the same color (green, blue, red, etc.) that you hook up. You get points for connecting them.

The “nerds” are the dorky looking guys and girls awkwardly dancing near your hotties. The nerds (or enemies) come in all different shapes and sizes and skills but they all have one thing in common. They aren’t beautiful (or “hot” in today’s vernacular). They wear glasses, their eyes are too far apart, they’re fat (Rolanda), they have unfashionable haircuts (Professor Dork), or they are old (Gramps). There’s also an over-the-hill cougar on the prowl (her name is The Mountain Lion). You must get rid of the nerds so they don’t interfere with the mating process. To dispose of them, you use a wide variety of actions such as flicking with your finger, rolling by tilting your iPhone, and tapping.

As you might guess, the game gets gradually more difficult by introducing these nerds into the mix. The higher levels contain loads of nerds who are attacking your hotties, trying to prevent you from your matching making activities. While I would classify Hottie Hookups as a time management game, in some ways it’s also like the tower defense games as well. You are basically trying to hookup the hotties as fast you can while fending off the “attacking” nerds who want to get in on the action. Hottie Hookups is perfectly balanced and very polished. The first few levels are very easy to win, and the new enemies are added just as you feel like you’re mastering each new set-up. 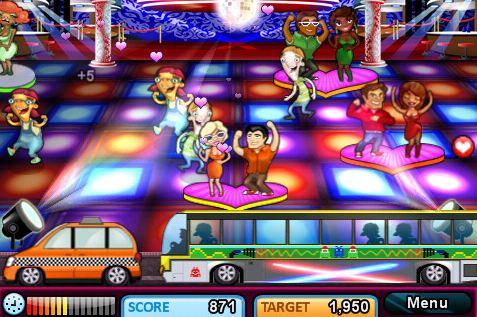 I actually found the sounds and music quite entertaining (and I loved the fact that I can play my own music in the background if I want to). When you tap on a hottie, he (or she) says “oh” in a funny, yet almost seductive tone. Then when you draw a line between them, the two hotties will say things like “oh, baby” or “hi” as they greet each other and dance together until a heart appears beneath their feet.

Even though there is a lite version of Hottie Hookups you can try for free, I think the full version is a bargain. If you liked Sally’s Spa or Diner Dash, then you’ll love Hottie Hookups. (In fact, the game was created by the designer and programmer behind both Sally’s Salon and Sally’s Spa). Just be prepared to explain the icon on your iPhone to your significant other. As soon as he finds out it’s a terrific and challenging game, he or she may download it too!