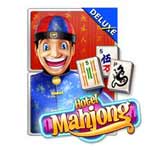 Casual gamers who played last year’s Hotel Solitaire might get a sense of deja vu while entering the lobby, elevator and hallways of Hotel Mahjong, as this is the second in the series from Zylom to fuse a luxurious stay at a hotel/casino and classic solitaire games. But don’t worry – the similarities end once you step into a hotel room to begin hitting the tiles.

In Hotel Mahjong, you’ll say bye to the elevator doorman and step out onto the first floor of the hotel, staring at five rooms to visit, each with a different mahjong layout to play. You can visit the rooms in any order you like but you won’t gain access to the second floor until you’ve successfully completed all five games on the first floor. Your goal is to work your way up to the top by unlocking all the rooms and other goodies.

In case you haven’t played this classic tile-matching solitaire game, here’s the scoop: players are presented with a board of tiles and you must successfully match two identical tiles in order for them to clear the screen; your goal is to clear the entire board. In some cases the tiles don’t need to be the exact same, such as two flowers, though Hotel Mahjong was a bit confusing in this respect as a blue circle can somehow be matched with a tile that looks like a beach scene (unless I’m missing something?!).

Sounds easy enough, sure, but not all tiles are accessible to you. In fact, the rules state that tiles with at least one long side free (to the right and left, not top and bottom) can be used to pair with another one, therefore just because you can see many tiles on the board (viewed from a top-down perspective) some will be grayed out until they’re available. Usually, the tiles on the edge of the pile or at the top of the pile can be clicked to make a match.

In Hotel Mahjong you’ve also got a time limit per level, and are also vying for a top score per level. To help rack up points, the faster you click, the more gets added to your bonus meter which is a kind of multiplayer for your score.

This 20-story hotel houses five rooms per floor, for a total of 100 different mahjong games, comprised of five main game variations: Classic Mahjong; Freecell (you can place tiles in a holding cell until you need them); Triple (three tiles make the match instead of two); Split (match tiles with those in a golden square); and River (tiles are also unlocked if one short side is free, tiles must be the same color and a line must be able to be drawn between two tiles before you can remove them from the board).

Not only are players unlocking new levels by completing the ones they’re on but they’ll also open up special variations of each of these five game types in the hotel’s Casino, as well as unlock new Mahjong tile sets and backgrounds to play on, should you choose.

Play well and you’ll also earn Awards such as "Score 100,000 points in one level of the hotel" or "Remove 10,000 pairs in total." You can see these award icons from the main menu of the game.

Despite the game looking nearly identical to Hotel Solitaire, and aside from the fact some players might be confused as to which tiles can be matched (you’ll figure it out), Hotel Mahjong is a fun spin on casual mahjong games with plenty of levels to complete, multiple game variations and challenging unlockables that will prompt you to ask for a late checkout!