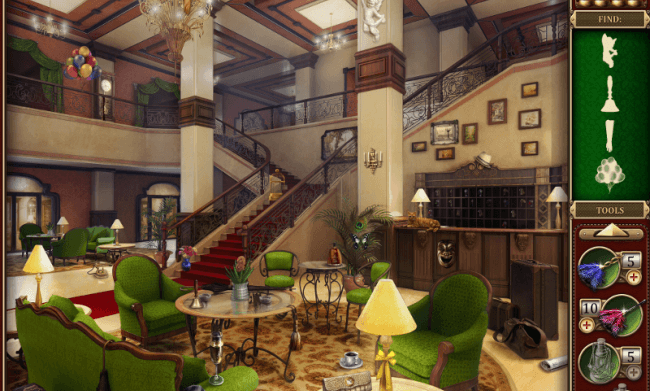 An enigma wrapped in a hidden object game

Hotels are weird places. Whether it’s a scream-worthy shower at the Bates or an extended stay at The Overlook, something strange is always bound to happen. Before you arrived at Hotel Enigma, one of the guests disappeared. Literally disappeared. Everyone is a suspect, so the hotel has been put on lockdown. Room by room you’ll carry out your investigation, searching high and low for the items you need to solve the case!

At Hotel Enigma, things are a little less murderey than most fictional hotels, though don’t think there’s an ounce less intrigue packed behind these cherry-stained doors. You’ll move between areas completing round after round of hidden object scenes as you gather clues and learn about the guests currently lurking inside the hotel’s walls. Eventually you’ll find out what happened to your room’s previous occupant, but you can bet your polyester necktie it won’t be a simple whodunit. 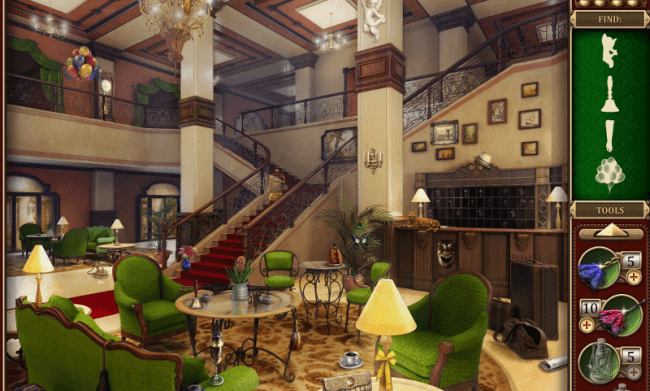 Things are pretty basic in Hotel Enigma as far as gameplay goes, with a heavy emphasis on replaying scenes to find new lists of items, often switching between silhouette hunts and typical laundry list scenes. Tap items to gather them, and use the menu bar to activate hints that range from vague item locators to straight-up indicators that show you right where the item is. There’s always a helpful nudge there if you need it, but most of the scenes aren’t so difficult that you’ll resort to spamming hint buttons.

As with most freemium hidden object games, Hotel Enigma comes with a few currencies you’ll need to keep track of. Energy tops the list and is required to embark upon any mission. It recharges slowly on its own and is also doled out by completing stages, but if you run out you simply won’t be able to play. Frustrating, as always, but Hotel Enigma doesn’t lean too heavily on it. Coins and sapphires are used to purchase items. There’s a lot you can spend your cash on in this game, from brooms that help you find objects, to collectors’ pieces, to items needed to trade with the hotel’s guests. Many of these can be unlocked or found through normal play, but you’ll have to replay stages several times to build up enough credit to grab them. 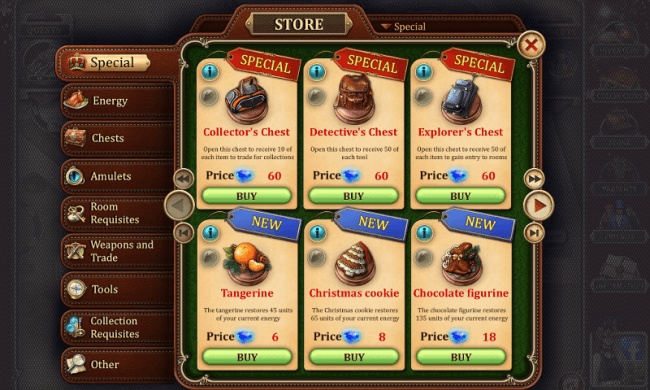 The gameplay doesn’t tread any new ground, but Hotel Enigma keeps things on track with an interface and puzzles that simply work. No fussing with menus or fooling around with mini-games: just hidden object scene after hidden object scene. The sheer number of items adds a nice full feeling to the store, even though their functions are almost identical, and it’s always nice building a collection as you complete more levels. If item hunting with a side of hotel mystery is your thing, Hotel Enigma will definitely give you your fix!