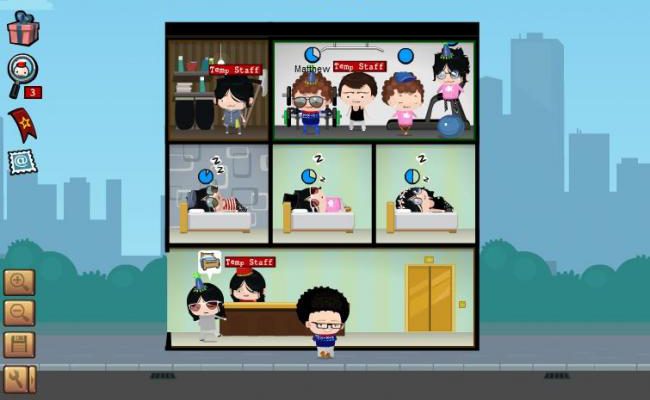 Building a new hotel from scratch is never easy. I should know – I’ve worked in more than a few. Without going too in depth on my personal work history, I’ll simply say that growing up near Niagara Falls means that hotel work is a rite of passage where I’m from. And like any former desk clerk, I’ve often muttered quietly to myself that I could do a better job than the owners above me. Hotel City is a game that let me put my theory to the test.

At the start of the game you’ll need to build your new hotel from the ground up. As such, you’ll be taking an active role in both the construction and decoration of the building. You’ll purchase new rooms and place them wherever you like, with a variety of room types becoming unlocked during the course of play. Guest rooms, restaurants, bars, and swimming pools will all get opened up as you progress. You can even add an arcade to satisfy your inner gaming geek. 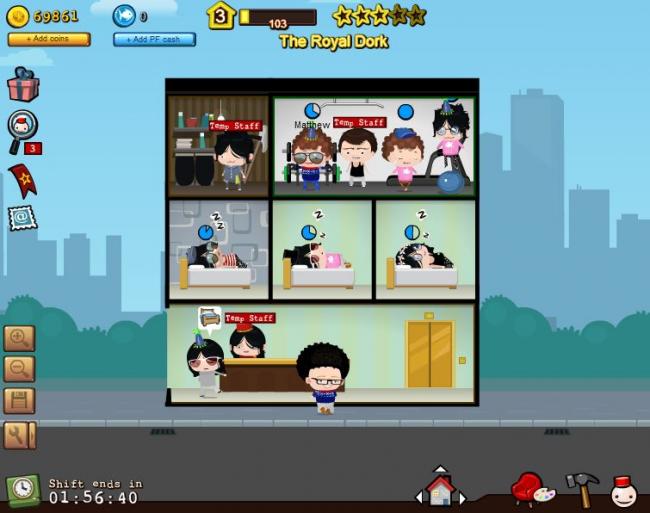 Decorating is a key component in Hotel City. The value of your decorations will play a large factor in determining your hotel’s star rating, and the star rating will help you get more guests and earn more money. Playing such an important role, we were delighted to see how robust the decorating options in Hotel City were. Wallpapers, furniture, art – the list goes on and on. There are 10 different categories of decorations to choose from, and each category has dozens of items. You can throw a mattress on the floor and put up some rock posters in one room, while you put a row boat bed on a bamboo floor in another. The combinations are seemingly limitless with no two rooms ever needing to look alike. And while it’s still too early to tell what’s to come, if we’ve learned anything from previous Playfish releases like Pet Society and Restaurant City it’s that new content is pretty much a constant in their games.

The social aspects of Hotel City offer a new twist on the old system of “employing” your friends, but it’s not one that works particularly well right now. Each functional room that you set up – the lobby, gym, or cleaning closet, for example – needs to have an employee attached to it. When you set up the room the game assigns a “temp worker” until you find a friend to fill that position. Unlike other games that simply let you select a friend for that job, you’ll need to advertise your open jobs on your Facebook wall and hope someone takes it. If they don’t, then you’ll be stuck with the temp worker.

It’s not that bad being stuck with the temp worker – the only real advantage of having a friend is that you’ll have to pay them less for their shifts – but as the only real social selling point in the game it feels a little weak – like we’re being forced to advertise their game for them. There are other social elements – sending gifts and visiting neighbouring hotels for daily bonuses – but these things are so commonplace now that it’s pretty much a give-in for Facebook games. 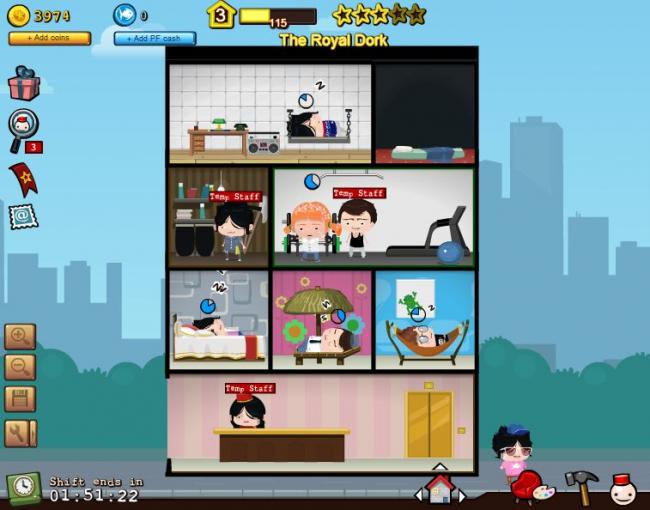 Hotel City pretty much operates on its own with very little involvement from the players beyond what’s mentioned above. You’ll still need to show up regularly to click the “start shift” button so that you can start raking in the dough, but asides from that there’s very little incentive to come back on a daily basis.

The game has a cute look to it and decorating the rooms can be great fun, but once you get into the meat and potatoes there simply isn’t very much game to be had. Every now and then you’ll have saved up enough cash to add a new room or improve the decorations in an old one, but beyond that and clicking “start shift,” Hotel City just doesn’t have the depth needed to hold your attention for long. It’s a fun idea, but the fun doesn’t last much longer then the initial set-up. Here’s to hoping the game gets fleshed out a little more in the coming months, because as it stands Hotel City offers little more than a two-night stay.