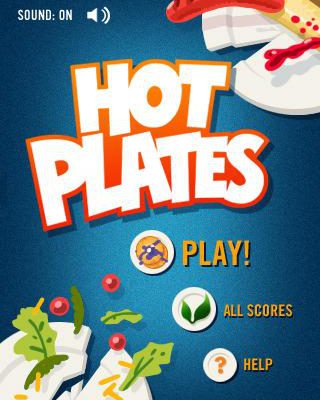 Plates! Gets a Restaurant Makeover

Sometimes a little change goes a long way. In the real world, restaurants change their name to better reflect what they serve, or their new direction. Plates! is under new management, has made some welcome changes, and now sports a new name: Hot Plates.

Addressing the laundry list of points against the original release, the developers have seen fit to give you more a la carte choices for your gaming pleasure. Most importantly, everything feels fleshed out. From being able to use your own music in-game (thank you!) to adding an extra mode and achievements to tweaked graphics, Hot Plates has become a much more well-rounded experience. 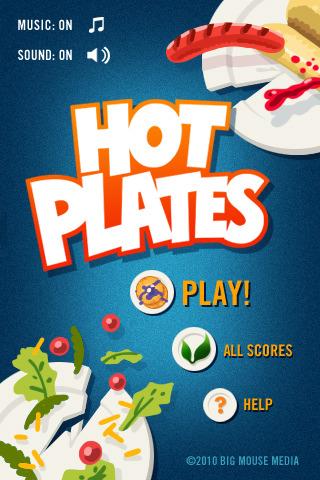 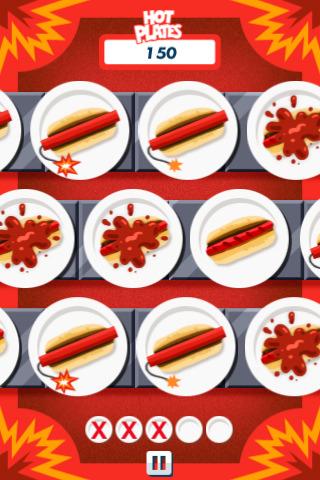 The new mode, Dynamite Dogs, is all about saucing only hot dogs, not the sticks of dynamite that look suspiciously like their wiener compatriots. It’s a fun, fast, quick-pick-up mode that adds a great challenge. The update also promises more modes to come.

Although still not perfect – the title screen music is still absolutely terrible, and there’s still no way to quit to the title screen without losing – Hot Plates has definitely moved up from appetizer to main course territory. It won’t stuff you silly, but will leave you satisfied.

If you remember the famous scene from I Love Lucy when Lucy works at the chocolate factory (furiously trying to package or eat the bonbons as the conveyor belt speeds past her), then that summarizes Plates! fairly well. It’s a simple arcade game that’s fun to play, but doesn’t dish out a lot of extras.

Essentially an old-school arcade twitch title, Plates! parades dish after dish of food to have one of four sauces squirted onto them. Steaks require brown steak sauce, pancakes require blueberry syrup, hot dogs require ketchup and salad requires salad oil. Combo platters (such as steak with a salad) require multiple squirts, while blank plates require nothing. But watch out for dynamite plates, for with one squirt, the game’s over. Miss five plates, too, and you’ll be looking for a new job. 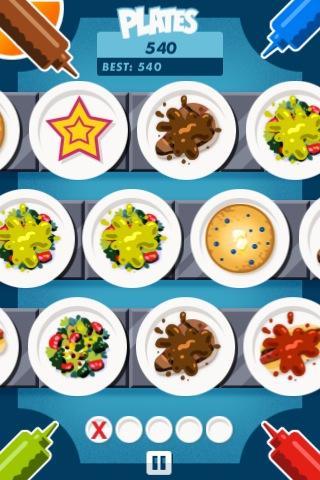 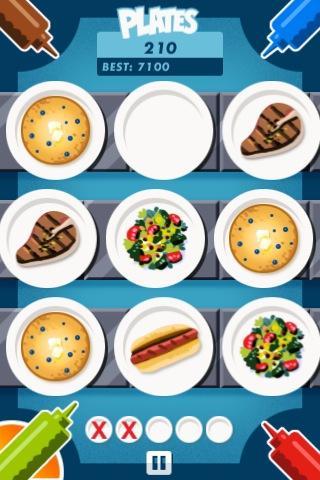 The graphics in Plates! are simple but functional. Food is easy to see, and it’s simple to tell which sauce you’ll need for a particular dish. While the music in the game is largely forgettable (a bluesy guitar riff with crowd noise, punctuated by the occasional shattering dish) the title screen’s music is truly atrocious. Once again, the lack of ability to use your own music library hurts a game with non-descript sound.

The ultimate goal of Plates! is to get the highest score you can. If you can squirt three or more plates in a row with the same sauce, you’ll get a 50-point bonus per squirt. Do well enough, and you’ll have a solid place on the game’s online leaderboard (thanks to OperFeint integration).

The three conveyer belts start pretty sparse and get fuller quickly. The four sauces sit in the four corners of the screen, so they’ll never be out of reach. Learning to work with two hands gets the job done much quicker. The game definitely has an addictive “gotta try once more!” arcade quality, which is definitely a good thing – particularly because this is all Plates! has to offer.

Plates! is old time arcade philosophy at both its best and worst. While the main mode is fun, there are no alternative modes, sauces or any extras. It’s just the single game, the single task. If thoughts of yesterday’s timesinks like BurgerTime get your gamer engine running, then Plates! is an amazing arcade game. If you expect a little more than that, let Plates! pass you by on its conveyor belt.