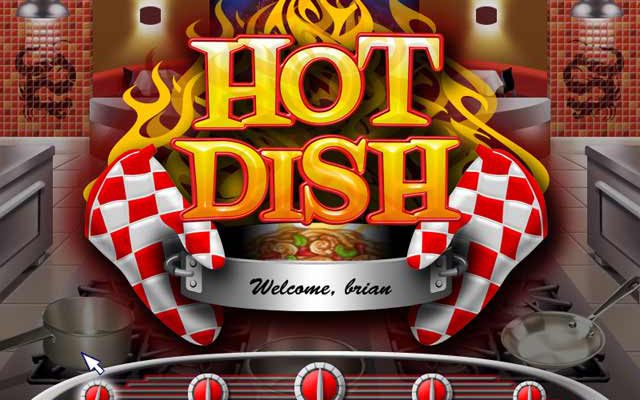 One of the more interesting takes on the time management genre we’ve seen in recent months, surprise gem Hot Dish serves up a heaping helping of fun. No matter your culinary skills, it’s worth having a look at, if only to see how much room remains for innovation in the category – especially when such enhancements prove this easy to swallow.

But first things first… Here, you play an up and coming kitchen protege, who’s been a whiz behind a pot and pan since youth. While there’s little more to the story, and setup – which simply whisks you from one restaurant (Italian eatery, Asian-fusion bistro, famed French dining room) to the next – trust us, you won’t complain. There’s more than enough juicy twists to sink your teeth into, as quickly revealed by Mama Giovanni (the first of three animated cartoon master chefs who act as mentors) and the furious hands-on action itself.

Play begins, appropriately enough, with a menu, as you choose between appetizers, entrees and desserts to serve patrons. The further you progress, the more courses and dishes which become available, with more complex recipes requiring more steps to prepare and garnering greater rewards for successful completion. While you start with simple servings such as pizza, Fettuccini Alfredo and spaghetti marinara, you’ll soon graduate on to eggplant parmesan, shrimp scampi, Pad Thai, egg drop soup, cashew chicken and other more delectable treats.

Don’t be put off at first: Yes, dish preparation unfolds on a still, boring background with bland accompanying soundtrack tunes based on the nationality and general decor of the establishment where the action’s set. However, the real excitement thankfully takes place in a series of windows laid out in horizontal rows across the screen, with each set – top, bottom, middle, etc. – devoted to one dish you’re preparing. Certainly, some frantic clicking at specific moments is required; timing is everything, as you attempt to perform actions that keep a constantly-cooling thermometer high, as doing so determines the ultimate quality of each dish. But the real challenge, as you’ll soon see, comes from juggling multiple tasks and thinking in several dimensions, as you’ll also be required to make certain speedy mouse motions as well at various exact moments.

In other words, simply chopping garlic or taking a pot off the boiler may require clicking frantically, or just doing so once a specific time when an indicator slides to the correct position on an underlying meter. But to saute shrimp, cut dough or brown chicken, you’ll also have to move the mouse up and down at the precise instance demanded, while stirring in ingredients may require moving it in a counter-clockwise motion. Not only do have to manage all these tasks efficiently, and make sure plates are served concurrently, as in real life. (You really feel like you’re managing a bustling kitchen.) You may also be called upon to perform several varied tasks in the course of a single preparatory step.

Of course, it’s not always clear how well you’ve done. (Simple animations and chefs’ repetitive comments aside – speech samples convey their enthusiasm or distaste – there’s little in the way of tactile feedback to know if you’ve stirred or mixed correctly until finishing each step.) And certainly, each new level mostly brings more of the same. (Apart from occasional mid-mission match-three health inspection challenges, which task you with removing bugs and rats to earn time-slowing or performance-boosting power-ups.) Even so, you’ll still find yourself hooked nonetheless, as 1-5 stars are awarded for each dish served (you can spend them purchasing new recipes between scenarios) and a reviewer’s scorecard presented after every meal.

Mind-blowing the simple excitement isn’t, nor will a basic range of play options (including an Adventure and instant action Ala Carte mode) featuring 45 levels with three themed locales wow. But with 80 recipes to unlock, truly hands-on cooking action and activities that feature a greater resemblance to the act of frying, grating and broiling than any seen to date, what’s not to love? Real-life inability to slice or dice notwithstanding, you’ll still find Hot Dish goes down easy and leaves you feeling satisfyingly full after each frenetic play session.