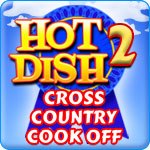 Appearing just after we’ve finished digesting the original, Hot Dish 2: Cross Country Cookoff lands on our gaming tables, all hot and gooey. If you’re still hungry for more after that gastronomical metaphor, then Hot Dish 2 may just be your kind of game.

Expanding on the original, Hot Dish 2 has you entering a cross-country culinary competition for the Gold Medal for the Cooking Grand Prix. You’ll cook in many diverse areas of the U.S., from Maine to Miami, from St. Louis to Los Angeles. In each region, you’ll cook a number of meals – sometimes as many as ten! – earning stars for great technique and unlocking new dishes to create to wow your judges.

Players of the first title will immediately feel at home. The graphics are very similar to the first game, but seem to have a bit more polish and vibrancy to them. From the title screen to the kitchen layout to the music, there’s no mistaking this for anything other than a Hot Dish game. One weird note, though, is some of the images look a little off; a pot in the very first level seemed to defy the laws of perspective. It’s nothing game-breaking, but weird.

Gameplay is largely unchanged from the first game. After selecting which dishes you’re going to cook, it’s off to the kitchen. There are three courses to cook: appetizers, entrees and desserts.

At the beginning of the game, Hot Dish 2 guides you along the various techniques in the kitchen, such as how to slice (click the mouse and drag it), stir (click the mouse, drag in a circle) or chop (click rapidly). While you can skip the tutorials, should you choose to, you’re not allowed to see any tutorials in  rest of the game. Why it’s an all-or-nothing affair isn’t clear.

There are a wide variety of gestures which, while very reminiscent of Cooking Mama, represent their real-life actions fairly well. I had some difficulty with the game recognizing my stirs at times, though. But for the most part, the food was prepared without a hitch.

As you prepare the dishes, a progress meter tells you not only how well you’re cooking, but how well you could potentially do by using blue to show potential and yellow for actual performance. If you don’t see any blue, you’re well on your way to a five- or even six-star dish if you’re perfect. You’ll also earn Prestige Points which can be used to unlock various kitchen aids. But be careful not to let your food just sit there, as it loses quality – not to mention hard-earned stars and Prestige – as it rests. Like a real kitchen, it’s very important to time all your dishes to finish simultaneously.

To help you cook, you can earn gadgets which can add extra flavour, slow down time so you can work at super speed, or even skip a particularly long or difficult step. Prestige also helps you buy unlocking Utensils and Ingredients, which help improve the quality of your dishes. For example, equipping the cleaver will improve the quality of a dish where slicing is involved, while equipping garlic will help you make any dish that contains it taste better.

The game is very intuitive once you get the hang of it. When you choose your menu, Hot Dish 2 shows you exactly what steps will be involved for all your dishes. So if, for example, you’re trying to make a lasagna and a pizza at the same time, both of them need to be baked for their final step. You can prepare the lasagna until it’s just about ready to go in the oven, then get the pizza ready. In this regard, Hot Dish 2 really represents a professional kitchen; you’re not penalized for par cooking your food.

Competing in the professional cross-country circuit isn’t free, so to help you pay your way, every now and again you have to help your uncle run his lemonade stand, which is basically a Root Beer Tapper clone where you must serve glasses of lemonade to customers before they reach the end of the counter. It plays fine (and allows you to earn extra Gadgets) but sometimes disrupts the flow of the game.

The different recipes really are varied in their preparation, and seem to follow their real-life counterparts in the stages presented. Almost every food style is represented here, from a New England Clam Bake to Risotto to Fried Plantains to Apple Pie.

If there is a major problem with Hot Dish 2, it’s the dreadful music. Really, this has to be one of the worst loops I’ve heard. I had to turn it off to maintain my sanity by the second city. Gameplay-wise, you can’t replay a level if you didn’t do particularly well at it, and the A La Carte Mode feels a bit like an afterthought. These are criticisms that can be levelled at the first game, and it’s odd that it wasn’t fixed here.

In fact, that’s probably the biggest issue with Hot Dish 2. It is a strong game in its own right, and definitely improves upon the first one, but feels more like a giant expansion pack than a true sequel. This said, it is a lot of fun to play and well worth downloading, but only if you didn’t fill up on the original.