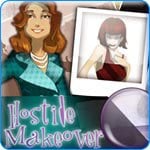 Hostile Makeover is a hidden object game based off Ellen Byerrum’s chick-lit mystery novel and the Lifetime television movie by the same name. While the twisty plot is heavily inspired by both, the game’s storyline takes off in a few new directions of its own.

Like the book and movie, the game’s protagonist is sassy Lacey Smithsonian, a fashion reporter and writer for the Eye Street Observer. When someone starts shooting bullets instead of photos, Lacey becomes a witness to murder. The victim, Amanda Manville, was a popular model and fashion designer with her fair share of enemies.

It all began when Amanda went from an ugly duckling to supermodel after extensive cosmetic surgery, but unfortunately, the surgery also transformed her from a soup kitchen volunteer into a ruthless diva. From stealing her sister’s designs to dumping her fiancee on national television, she had a way of upsetting everyone around her, and plenty of people wanted her dead. Amanda feared for her life, but Lacey crossed it off as crazy paranoia. Feeling guilty for not believing the murdered model, Lacey takes it on herself to find Amanda’s killer.

To play, you must investigate each suspect in the case, and determine their guilt or innocence. There are nine potential murderers to clear, including Amanda’s sister, her body guard, personal documentarian (memoir writer), ex-fiance, stalker, business partner, hair stylist, personal assistant, and her plastic surgeon.

From the suspect screen, you can investigate any suspect in any order. However, once you start investigating, you need to complete and clear the suspect before you can continue.

The hidden object tasks vary with each round you play. You may be given a list of items to find, or you may be shown the silhouettes. Very often you are given a spot the difference task, which has you comparing two images to find their differences.

You have the choice between timed or untimed game play. If you get stuck, you can click the blue button above your list (which shows a woman’s profile). This activates your "savvy fashion sense" and helps you locate objects by making the area surrounding the object sparkle. Hints are rechargeable. If you make several incorrect clicks in a row, the cursor will temporarily freeze.

Lacey believes in retail therapy, and ditches her stress by shopping for clothes. In a cool new twist, you can unlock special abilities by buying outfits with cash you earn in the game. The game play is improved a lot by using these special abilities, so I’d recommend you get the night vision and female intuition outfits as early as you can in the game. The night vision goggles can be activated to let you see all possible objects in a scene. Female intuition shows you the objects shape if you know the name, or the name if you know the shape. Both of these are rechargeable, and function like additional hints.

The real strength of Hostile Makeover is the story. The plot is very interesting, although there are often gaping holes. Suspects are sometimes ruled out without clear reasons. I’m no detective, but I don’t think I’d rule out a suspect who was stalking the victim a few minutes earlier, or rule out a dumped fiance just because he’s missing for the moment.  Maybe it makes more sense if you’ve read the book or seen the movie.  Either way, it’s fun to see how things develop.

The production values are about standard. You can expect around 5 hours of game play in total, but the replay value is questionable once you’ve solved the case.

The primary drawbacks have to do with the hidden object tasks. The scenes are varied, but the objects repeat frequently. You can expect to find the same iguana and vampire teeth and penguin multiple times. Here’s a tip…any giant yellow splotch you find is called a lemon.

The spot the difference scenes are fairly easy, but the silhouette scenes are extremely tough. Sometimes you are shown shapes like circles or ovals, which are ambiguous and may apply to multiple items on the scene. This is fixed by using the special power ups, particularly female intuition, so you might want to make that a priority.

Some screens are extremely dark, with objects obscured in the shadows. Other times, objects are teeny-tiny, making them very difficult to spot. There is also some blurriness to contend with, which can be particularly rough in the silhouette scenes where the shape really counts. It helps a lot to increase the brightness setting on your pc monitor.

Hostile Makeover has an engaging theme and some interesting new twists, but be prepared for unanswered questions and a lot of pixel hunting. It’s a HOG that manages to be easy and challenging at the same time.