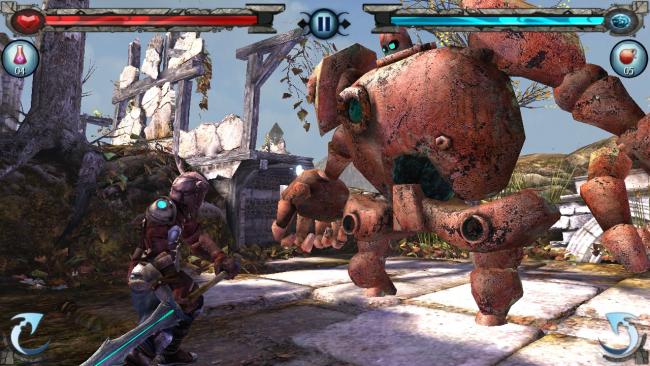 Jaw-dropping Unreal games aren’t as common as you might think on the App Store.  And jaw-dropping Unreal games published by Zynga? That’s completely unheard of.  But Horn, the first game to benefit from Zynga’s mobile partnership program, manages to defy both of these trends, presenting a beautiful mobile adventure that no gamer should be without.

Developed by Phosphor Games Studio (the folks behind the spooky asylum romp Dark Meadow), Horn tells the story of a young boy with horns on his head who wakes up in a tower and must find his way home alongside a female companion.  If you’re starting to feel a sense of déjà vu, it’s probably because you’ve played Team Ico’s seminal (and self-titled) classic Ico.  And ‘déjà vu’ is a term you’ll want to get used to if you’re playing Horn.

This is a game with a lot of fairly clear inspirations.  In many ways, the game almost feels like a greatest hits collection of games gone by.  It’s a little bit Zelda, a little bit Infinity Blade, a little bit Fable – but all of it comes together to form something wholly unique in the mobile space. The components may feel a bit familiar, but Horn is greater than the sum of its parts.

Without spoiling too much of the story (and really, it’s the story that is going to keep you playing Horn through to the end), I can say that Horn is filled with plenty of laughs, a good deal of mystery, and characters that you’ll actually care about.  It’s not Hemmingway, but it can certainly go toe-to-toe with any console release out there in terms of narrative.

Combat in Horn is pretty fantastic too, which I suppose isn’t a surprise considering its influences.  At a glance, gamers would be quick to call it an Infinity Blade clone – but that comparison just isn’t fair.  Yes, the game borrows the “swipe like crazy” mechanic of Infinity Blade for its combat, but there’s much more of a Zelda underpinning than an Infinity Blade one.  Battles require you to roll around your enemy in 360 degrees, striking at a weak spot whenever you find it.  You’ll need to time jumps to avoid big, sweeping actions from your opponents.  As far as mobile action games go, Horn has taken the high bar set by Infinity Blade and raised it even higher.

But Horn isn’t all about combat – there’s a great deal of exploration, too.  You’ll wander around by tapping where you want Horn to go, occasionally having to jump over a broken bridge, shimmy along a narrow ledge, or get pulled upwards as you turn your projectile weapon into a grappling hook.  Phosphor Games has created a stunning world, and while it’s fairly linear, exploring every nook and cranny never gets tired.

On more than a few occasions you’ll need to flip a switch, play a tune, or light a fire to open up an area that was previously inaccessible.  The environmental puzzles here are fairly basic, but because they give you an excuse to go poking around in these stunning environments, this isn’t something that’s going to bother you. 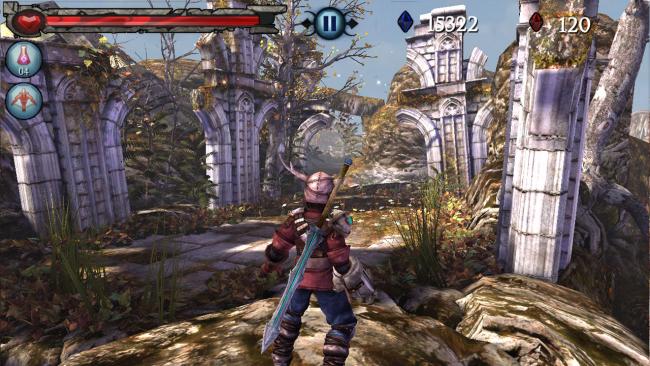 It’s also worth noting that when they say “optimized for iPhone 4S, iPad 2 and new iPad,” they really mean it.  While the game looks incredible on the new iPad that we tested it on, we also tried playing it for a bit on an iPhone 4; it wasn’t a good experience.  While the game was still playable, there was a serious downgrade in visual quality, with jaggies and framerate stutters a regular occurrence.  Our advice?  If you can’t play Horn on one of the optimized devices, you might want to wait until you can.

I don’t want to sound too overdramatic, but if I were looking to sum up Horn in two words, it would probably sound something like ‘mobile masterpiece.’  There are very few games that manage to raise the bar for everything that follows, and Horn can easily count itself amongst them.  We’ve heard talk of “console quality” games on the App Store for years, and for the first time, I think we’ve seen a really solid example for one.  If you own one of Apple’s latest devices, do yourself a favor: go download Horn right now.