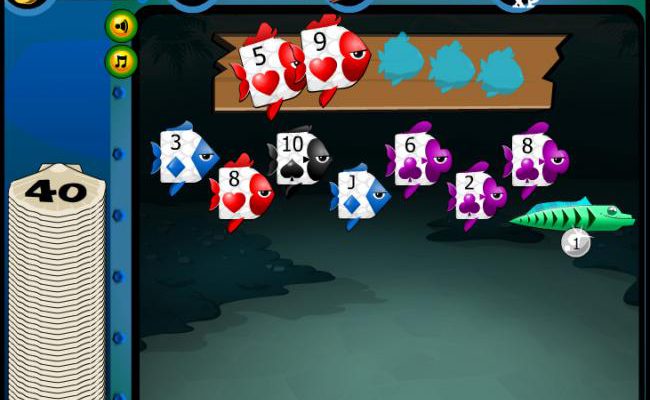 Card games have been around the Internet a long time, and Facebook is no exception. Now social developer RockYou is looking to add its version of poker to the digital pot with Hooked. While Texas Hold’Em games such as Zynga Poker and Playdom’s WSOP Poker have been around for a long time, that doesn’t mean there isn’t room for change. Hooked takes the basics of the popular card game and shifts them into a sort of arcade-style app, tasking users with making as many hands as they can in the time allowed.

There no story in Hooked. You, for whatever reason, are diving a submarine down into the depths of any number of aquatic areas to play cards with some, for lack of a better term, “poker fish.” No, you don’t play with the fish… or maybe you do. Anyway, the fish are the cards and you have 60 seconds to try and reach the highest score possible by creating different poker hands as these card fish swim onto the screen. 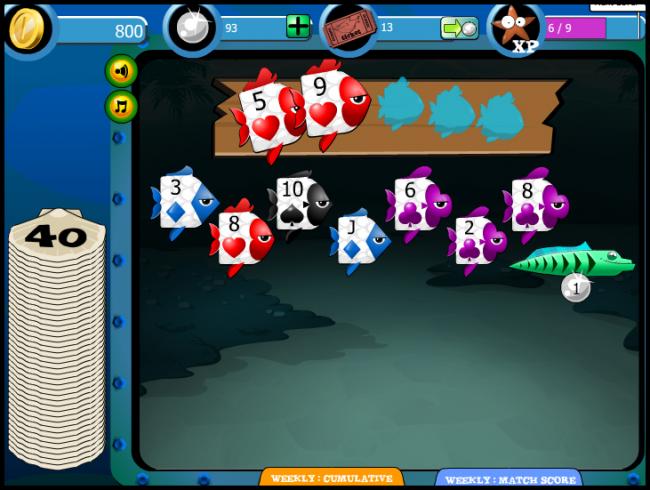 The hands are all relatively standard and include things such as a full house, a pair, or straight. That in mind, there are few other odd-ball hands such as “rainbow,” which requires a card of every color (fish come in several colors). For each hand you create, points are earned, with better hands being worth more. Even if you aren’t able to make a decent hand you will at least earn something.

The challenge really comes down to earning the high score and competing with friends via weekly leaderboards. To add a bit more arcade play to the game, you can also click on cartoonish “bonus” fish that meander into the game space from time to time. You’ll also have access to different boosts on certain levels during play. These stages must be unlocked by reaching a certain level, and the bonuses mostly consist of giving score boosts or extra in-game currency. What is always available, though, is a special eel that allows you to instantly remove the fish cards that are currently on the screen so a new set can swim in. They will swim out on their own, but that takes a few seconds.

As you finish each round, experience and “tickets” are earned. These tickets are the primary game currency but unfortunately they are not used for much yet. There are power-ups noted in the game that can be purchased and a possible decorative space, but neither are available at this time. Currently, the only thing they can be used for is to be turned into the virtual currency of “Pearls,” which is used to activate the abilities such as the eel, undo a move, or make use of boosts. 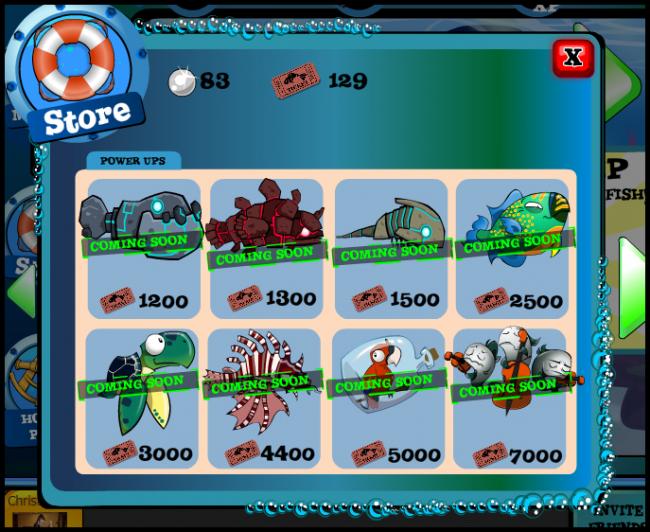 On the social side of things, Hooked goes slightly beyond the leaderboard system and actually has a quasi-synchronous play. You can join a live match against other players and compete for a high score in each round. Unlike titles such as Zynga Poker, you do not actually play against the other users. Instead, you play the solo version of the game at the same time. The only real difference is that you can see the other participants’ score as you are earning yours. Unfortunately, since the game is new, there are not many people playing yet, and thus waits or opponents that are away from their keyboard tend to be common.

On the downside of things, Hooked does feel a little repetitive. It’s almost always the same thing. Also, the human element is far less than what it is in actual Texas Hold’Em games. Here, there is no betting, no risk, and no bluffing. All you get the same solo game with the scores of a few other players at the bottom. Granted, it adds a little to the experience, but not much. The game also constantly pops video advertisements in your face. Thankfully, they can be skipped, but it still happens very frequently.

In terms of presentation, however, Hooked is very well made. It makes use of the typically colorful style of most Facebook games, and it has this knack for increasing the tension with urgent music that plays as time runs low.

Hooked isn’t a bad game, but it’s novelty tends to wear out very quickly. That said, two significant aspects of the game — the power-ups and a decorative virtual space — are yet to be released, so that lack of longevity may be remedied in the near future. With that in mind it might be best to wait for some updates before really getting into it.

The Binding of Isaac Review