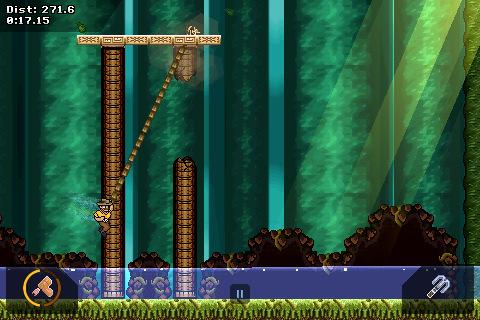 If you didn’t manage to get enough swingin’ action in Hook Champ and Super QuickHook, Rocketcat Games has just launched the third game in its rope-and-hook series, Hook Worlds. Unlike its predecessors, Hook Worlds takes a break from careful and detailed stages to dabble in the endless running genre.

Drawing as much of its inspiration from games like Canabalt as it does from Hook Champ or Super QuickHook, Hook Worlds offers up three different experiences that combine endless running with the series well-loved grappling hook gameplay.

Each of these three experiences are presented as their own game within the app. The first, Curse of the Watcher, offers a game that’s far more approachable than anything the series has offered in the past. Drawing story inspiration from the original Hook Champ, players will attempt to outrun an evil spirit using only their hook to propel them forward. While each of the three games offers randomly generated levels (in turn offering a staggering amount of replayability), the layouts here are kept fairly simple, giving players a good opportunity to get their feet wet without feeling overwhelmed. The only thing players need to do in Curse of the Watcher is tap the on-screen button to fling their grappling hook and swing forward, and if you happen to get in a jam, there’s a handy rocket boot button to give you the lift you’ll need.

Bounty Gunner changes things up a bit. Rather than outrunning a demon and getting a score based on distance, players will pack a pistol and shoot pirate ghosts to collect treasure. Navigation is still the same here – you’ll need both your hook and your wits about you to travel from place to place – but instead of simple survival, the focus of the game is switched to self defense and treasure hunting.

The third mode, Cybergnome 202X, offers the greatest challenge. Set in a future world where gnomes are outlawed, one gnome tries to evade capture using only his trusty hook and gravity belt. The belt can flip gravity (as the name suggests), putting the gnome on the ceiling whenever the situation calls for it. This adds a great new twist to the formula, as you’ll not only be switching up and down to avoid obstacles, but you’ll need to master using your hook to swing from the floor when in an upside down situation.

There’s no denying that Hook Worlds offers up a great collection of fun and addictive survival games for a single low price, but it’s also hard to avoid the fact that much of what had made the series previous entries so much fun is missing here. By offering randomly generated worlds, the brilliantly designed stages of the past are forced to stay in the past. And while new hats and hooks can be unlocked here, none of them seem to modify the gameplay as the items of previous games managed to. 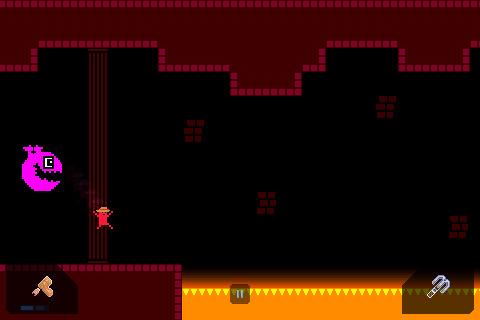 Still, these are minor complaints. Rocketcat Games has decided to take the series in a different direction, and considering how hard Hook Worlds is to put down, it’s clearly a decision that works. If we had only one other complaint, it would simply be that the modes included don’t feel all that unique when you look at what else is on the App Store. Gravity flipping has been done before in games like Gravity Guy, Monorace and Gravity Runner. Bounty Gunner feels like it draws some of its run’n’gun inspiration from Monster Dash. That’s not to say Rocketcat hasn’t put their own unique twist on these formulas, but they’re not wholly unique either.

Players who purchased the game in its first few days of release earned exclusive early access to the game’s upcoming fourth world, Hook Champ 1000. With visuals inspired by the early days of video games, the gameplay here is pretty similar to Curse of the Watcher but with the difficulty turned up to 11. For veterans of the series looking for a supremely difficult challenge, it’s a blast. For everyone else, it’s a great indication that Hook Worlds will no doubt see additional content in the future.

While it may be a simpler offering than what’s come before, Hook Worlds offers a great deal of diversity and nigh infinite replayability. If you’ve ever found Hook Champ too challenging to play through, Hook Worlds is a great endless sequel that anybody can enjoy.