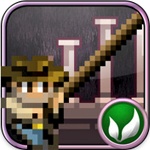 Hook Champ is a platformer with a bit of a twist. Instead of running and jumping, the real focus of the game is swinging. Equipped with a grappling hook, you’ll tap the screen in the direction you want to throw it in the hopes of attaching to an object to swing from. Once you get into the swing of things (at university I majored in puns), you’ll quickly learn how you can control speed and momentum by releasing the hook at a certain time or keeping the rope a certain length. This will get you moving through levels at lightning speeds, and that’s a good thing. You see, there’s a demon that isn’t taking too kindly to your presence, and he’s trying to catch up to you with his big teeth and eat you up whole.

The game is broken up into different “maps” that will lead to different treasures. Each of these maps introduces its own unique element that you’ll have to learn and master over the course of four stages. One level features a lot of water that will slow you down if you land in it. Another features walls that you’ll need to smash through with a certain amount of momentum. Yet another has lava that can burn you to a crisp. The learning curve on each of these is incredibly fair. The first stage map introduces you to the idea, the next two build up the challenge, and the last stage of each map – while seemingly impossible in some instances – never leaving you feeling unprepared for the task at hand.

While the level design is what really helps turn Hook Champ from a great idea into a great game, there are a number of other touches that really helped to round out the offering. The game features a shop where upgrades can be purchased; leading to longer ropes, stronger hooks, and faster shoes. New items are available too; maps to explore, pants to keep you safe in the lava, or rocket boots to help propel you upwards, for example. There’s even a wide selection of hats available so you can help your Champ accessorize.

One of the features we loved the most may have been the easiest for the developer to implement, yet one of the most genius: ghosting. Ghosting has been a popular feature in racing games for some time now, yet I don’t think we’ve ever seen it in a platformer. The idea behind ghosting is simple: when I start a new level, a “ghost” version of my best performance on that level will also show up. This way I can know whether or not I’m performing better or worse than my earlier attempts. It may not sound like much, but if I’m having trouble outrunning the relentless monster that wants to make me dinner, it’s a big relief to know I’m ahead of my past self.

The game offers up a great sense of humor and a solid presentation as well. Intentionally old school graphics harken back to the days of retro video games – a smart decision that compliments the old school challenge of the gameplay quite well. Little jokes pop up at the beginning of every level too, like when our hero comments that the new challenge appears to be magma, and his associate replies “you’d better taste it just to be sure.” There’s a distinct charm about the game that compliments the other components splendidly.

Grappling hooks have been a video game mainstay for as long as I care to remember, but I don’t think I’ve ever had as much fun with one as I’ve had in Hook Champ. Sure you can walk, but why would you? This is an entire game built around the idea of aiming and swinging. When combined with the many obstacles and brilliant level design, the swinging mechanics in Hook Champ are second to none.

The difficulty, level design, and occasional item come together to create an experience that keeps you on the edge of your seat from the word go. Hook Champ is easily the best example of old school gameplay on new school systems that we’ve seen to date. It’s Indiana Jones meets Bionic Commando meets Speedy Gonzales. It’s a triumph in 8-bit style gaming. But most importantly, it’s super-addictive non-stop crazy fun.