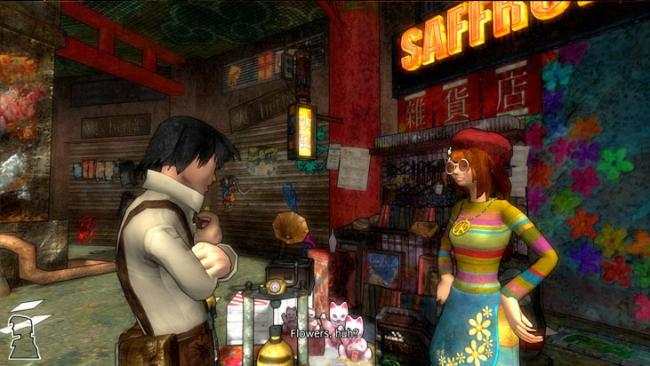 Hoodwink has plenty of character, but the game is a mess

Someone took this game out of the oven before it was done, which is a shame because it had potential.  Hoodwink is a point and click adventure that tells the story of a professional thief — or, as he calls himself, an acquisitions expert — who steals a diamond ring in order to propose to his bride to be.  Later in the game he also calls himself an unlicensed maniac, which is probably a more apt description.

In the opening scene our “hero” Michael steals the aforementioned wedding ring from a private investigator who discovers Michael in his office during the caper.  To escape, Michael sets the private eye on fire, bolting out the front door as the PI writhes around on the floor engulfed in flames.  Thankfully this is a world of cartoon violence — the private eye eventually returns.  Until he did though, I spent the game thinking the main character was a complete sociopath willing to commit murder for monetary gain.  Not exactly the best way to start a comedy.

Hoodwink takes place in a mashed up steampunk/cyberpunk dystopian future that took a heavy dose of whatever Alice was on when she went to Wonderland.

Sounds awesome, doesn’t it?  Well, I can say with enthusiasm that the setting is indeed cool.  I’ll also say that Hoodwink’s animation — particularly during cutscenes — is top notch.  The graphics are quite nice too.  Hoodwink puts cel shading to good use.  I’d go so far as to say some of the game’s set pieces are dazzling.  Unfortunately, those are the only nice things I really have to say about Hoodwink.

After installing, it wasn’t long until I realized it was broken.  As I said, Hoodwink had potential.  It could have been great, but it fails for all the reasons a game shouldn’t.  First of all — and most importantly — Hoodwink runs terribly.  At my monitor’s native resolution, the mouse cursor was so laggy that it made even simple tasks difficult. For what it’s worth, my computer can run far more graphically demanding games without issue.  The only performance boosting option available is lowering resolution — to make the game playable I had to lower it to 1024×768.

Performance problems might not be such a huge problem if not for the uninspired minigames that punctuate Hoodwink’s puzzles.  The first minigame demands that you turn a crank in order to activate a fan.  To turn the crank, you click and hold the handle, turning it until the fan kicks on.  The next minigame involves grabbing hold of anthropomorphic roses as they run around in circles.  You must click and hold your cursor over these roses for a solid second to catch them.  All this sounds simple, but a laggy mouse cursor makes these tasks frustrating.  I found that lowering the game’s difficulty meant I could grab the roses more quickly.  I suggest you do the same if you play.  These minigames are not fun, and the faster you can get through them the better.

Hoodwink’s checkpoint system is needlessly frustrating as well.  There is no way to save your progress in this game.  If you play for 15 minutes and then have to end your session before you reach the next checkpoint, you’ll lose that progress the next time you play.  This strange omission can’t help but make me think that Hoodwink was rushed.  A number of graphics and audio glitches suggest the same.  Nothing stands out as game breaking, but character models duplicate and overlap, and audio clips sometimes play over each other.  Directing Michael around the game world is a stuttery process, and transitions between camera angles are anything but smooth. 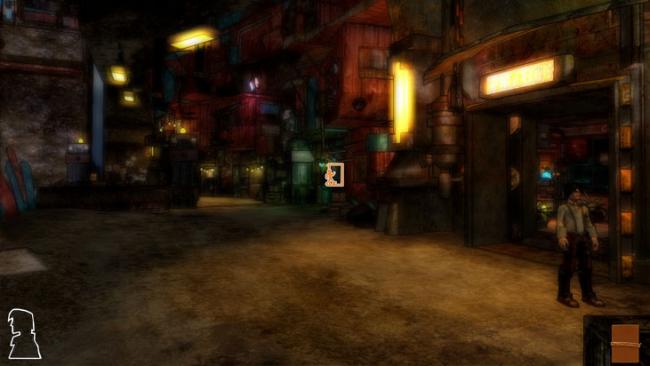 If you are an adventure game devotee brave enough to try Hoodwink for yourself, you will eventually notice something else about the audio — or lack thereof.  There are virtually no sound effects in Hoodwink, and music only plays for a short time when you move between screens.  When you hit the main street, you’ll notice an eerie silence as you wander to your next objective.  No footsteps, no wind, no hustle and bustle, just… silence.  Silence that is broken by the occasional chatter of NPCs.  This chatter is amusing the first time you hear it and it helps build the world’s backstory.  But every time you pass these NPCs you’ll hear it again… and again… and again.

Which leads me to another problem.  Anyone who’s ever played an adventure game knows that a lot of clicking is involved.  Often times, you’ll click the same item more than once as you’re trying to work out a puzzle.  Anyone familiar with adventure games will also know that every time you click an item, your character makes a quip about it or describes its function.  In Hoodwink, there is no way to skip that quip.  After impatiently clicking an item multiple times, I also discovered that each click queues up.  Much to my dismay, I had to listen to the main character make the same quip three times in a row before I could do anything else.  I learned not to make that mistake again.  Patience is a virtue, I guess.

And patience is something you’ll need if you play Hoodwink.  It’s a very rocky start to what could eventually prove an interesting episodic game series.  The arc of this episode’s story is modest and there isn’t much of a pay off at the end, but it sets up an interesting world.  There is potential here.  Let’s just hope the next episode gets the time it needs before it’s released.

Howlville: The Dark Past Review