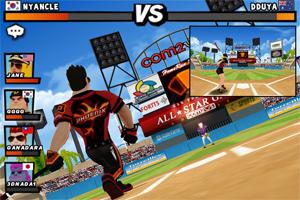 Now that the World Series is over, we baseball fans need something to keep us occupied until Spring Training starts up again. For those of us who don’t live near any batting cages, Homerun Battle 2 has just arrived in the App Store. The game’s mechanics are incredibly simple and effective, offering what seems to be a fun little virtual sports game for us to enjoy. Sadly, the technical issues and incredibly frustrating in-app purchase system kill just about any joy you’ll find.

Essentially, Homerun Battle 2 is a batting simulator on your iOS device. After agreeing to one of the most intimidating end-user license agreements you’ll ever encounter (seriously, players are required to immediately report bugs they find? When did we become Com2us’s QA department?), you control a baseball player at bat. A targeting reticule (in the shape of a bat icon) can be moved around the strike zone by tilting your device one way or another. When the ball is close, you tap the screen to swing. The end goal is to hit as many home runs as possible.

The game’s single-player mode is fairly basic, which doesn’t really matter since it’s the multiplayer part that’s really important to this game. Unfortunately, online gameplay is a double-edged sword.

When you start playing online, it’s fun to go head-to-head with other players from around the world. The multiplayer function contains three different modes: Duel, Survival, and Mission. Duel is a standard head-to-head mode, where you try to fill up a points gauge before your opponent can (here’s a quick hint: Each consecutive home run causes a score multiplier). Survival, meanwhile, is the exact opposite. You have to keep your progress gauge from running out before your opponent’s does by hitting as well as you can. Mission, however, is the most interesting, because it puts four players together and gives them a goal that everyone scrambles to meet (like hitting a certain number of home runs without any strikes) before anyone else can.

However, there’s a massive flaw in any multiplayer mode: the upgrade/business model means that it’s almost impossible to overcome your opponents if they’re willing to shell out some serious money and you’re not.

Upgrades come in the form of outfits, accessories, and bats, all of which can boost your hitting power and accuracy. New items can be earned by achieving gameplay milestones, though the majority need to be unlocked via in-game purchases. There are two types of currency: stars and golden balls. Golden balls are earned in the game itself, especially if you manage to keep on defeating online opponents. However, you have to earn an insane number of balls before you before you can actually purchase anything with them.

Now, in-game purchases like the ones that require stars are pretty common in a lot of games. That said, the gear in Homerun Battle 2 is weirdly pricey. Once you start partaking in online battles, it’s not too uncommon to encounter other players rocking outfits and bats that cost somewhere between $20 to $60. Since this digital equipment provides some major attribute boosts, playing against people who’ve effectively bought an unfair advantage loses its appeal pretty quickly.

It also should be noted that there are a couple of big technical problems with the game. First, it crashed about every fifteen minutes or so during our testing, both on the iPhone and the iPad. Also, the accelerometer sensing technology within the title seems a bit off: things are a little unreliable when it comes to aiming the batting reticule. This was especially noticeable on the iPad, since the device had to be constantly tilted just to hold the reticule steady. Unfortunately, there’s no calibration tool within the game to help solve this issue. 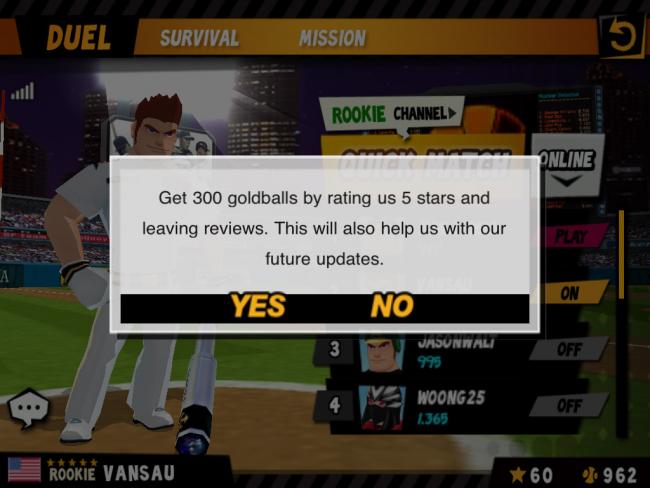 The accelerometer issue isn’t the only thing wrong with batting, either. Though the game features a quick tutorial that covers the basics, it doesn’t mention how to aim a hit. In fact, it actually seems impossible to aim with any real degree of accuracy: even if you smack a ball in the same spot of the strike zone, they’re likely to go in totally different directions. That wouldn’t be a problem if the game didn’t constantly tell you to aim for certain sections of the stands in order to get a bonus with your next home run. Based on the online matches I played, I wasn’t the only person who had this problem, especially during rounds in the Mission mode.

Of course, it’s unlikely that you’ll read about these issues in iTunes reviews, since the game constantly offers to bribe you — literally, just look at the included screenshot —to give it a five-star review in exchange for a few hundred golden balls.

At first, Homerun Battle 2 feels like a great head-to-head sports title, thanks to its slick presentation and fun multiplayer. Unfortunately, that feeling goes away pretty quickly because of how the developer is obviously trying to make you spend as much money as you possibly can — after you’ve already spent $5 on the game itself. The initial fun just isn’t worth the frustration when you start losing online matches because your opponents are willing to spend way more cash than you are.