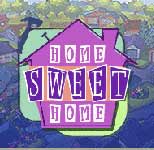 Anyone who regularly tunes into television networks like Bravo and Lifetime or dreams of DIY (Do It Yourself) stardom will feel an instant affinity for Home Sweet Home. An original, eye-catching blend of puzzle-solving and real-time strategy mechanics based on an innovative concept – you’re the interior designer – the title’s sure to resonate with would-be decorators of any style or gender.

Prepped on the basics by your mentor, cartoon redhead Dee Ziner, you’ll be able to instantly jump right into the outing, with no core storyline or complex setup to muddy the waters. Essentially, players just visit 50 clients’ houses and attempt to spruce up an equal number of rooms based on riddles customers provide which give clues as to their personality and the type of accessories they adore. For example, one customer might be a magician who constantly receives books as gifts and performs acts with doves. Another could be a woman who loves watching soaps and digs the sun’s colors, but finds it troublesome when there’s a glare on her TV.

Armed with a set budget for each project, you’ll have to drag and drop various items onto otherwise Spartan floor plans to create patrons’ idea of a perfect room. At your disposal are couches, love seats, stereos, pool tables, plants, vases, end tables and so on, with dozens more options introduced with each new stage, and price tags attached to all. (A whopping 400+ pieces of furniture are available in total.)

The catch being, of course, that it can be tricky to deduce what each person’s looking for. For example, a new divorcee outfitting his bachelor pad who likes it loud may either want a stereo or a brightly-colored retro rug. (Thankfully, for a help fee, you can have the game automatically solve the riddle.) However you do get immediate feedback in the form of a thumbs up or thumbs down rating from the client, reflected in a boost or penalty to an overall satisfaction meter. Raising this satisfaction meter past a preset level, and meeting a minimum item quota, is your core goal, with it possible to progress into a construction phase once both tasks have been accomplished. A challenging, but fun proposition – item placement’s just as important as outright accoutrement selection – these gray matter-intensive scenarios only get trickier as you go, with balancing cost versus benefit becoming increasing crucial in later levels.

Why? Easy… larger projects such as adding wallpaper or redoing floors take longer to complete. So although you can earn yourself a bigger cash reward (you get paid after every design sequence) and cooler visual payout by tweaking and adding to rooms until your budget runs out, sometimes settling for function over form’s a necessity. You see, after finishing room layouts, you also have to build them, at which point the game switches play styles entirely. During this second, more spastic phase, under the watchful eye of project manager Bill Durr, you’ll have to direct on-screen team members Brian, Goran and Liz to construct the furnishings you’ve placed.

Amusingly, each character must be clicked on and then assigned a task (also accomplished with a click), and has an energy level, which depletes as they assemble Asian wall hangings, place armchairs or throw up candy-colored blinds. Keeping productivity high is crucial, since you only have a certain amount of days – depicted via a slowly dwindling calendar/timer – in which to complete each vignette, with bonus loot awarded for beating projected deadlines.

This can be done by dragging and dropping coffee pots onto exhausted workers, asking them to build objects that glow with their color (which don’t tire the associated individual) or assigning multiple helpers to a single task, which boosts the rate of completion. An enjoyably frantic exercise, things only get crazier when you need to hand them tools, cart away trash or use first aid kits to staunch injuries on team members who crazily run about the screen after a nasty scrape.

Bearing this in mind, a few minor quibbles aside – e.g. some objects can be placed in what should be impossible ways due to flaws in game logic, tools that are hard to select when others are stacked on top of them – it’s hard to fault the experience. Considering that money earned playing at any of three distinct difficulty levels can be spent outfitting your own house ad naseum, and collectible pictures taken of these creations (you also get photos of any clients’ houses you’ve worked on) saved in a constantly-expanding portfolio, what’s not to like? The sort of title that just know is destined for great things, and makes you proud to be a casual gamer, we’re confident that Home Sweet Home will provide a suitably chic accent to any desktop or portable computer.