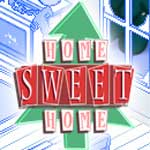 Bright lights, big smiles, frosty temperatures and dozens of casual game developers looking to cash in while Christmas carols and Chanukah hymns are a-ringing… yep, must be holiday time again! First to star the yuletide season off with a bang is Home Sweet Home: Christmas Edition. A relatively minor expansion on the popular interior design simulation series, it’s nonetheless one with a welcome Noel-themed twist.

Never mind the storyline itself, which – at odds with prior entries -veers more towards the realm of Hallmark specials than DIY reality TV. Accordingly to the attractively animated intro, the town of Good Tidings is losing its spirit, and the mayor’s in a tizzy, with December 25th just around the corner. Cue a desperate call to Santa, who’s too busy making toys to help, and begs a favor from Dee Ziner, apparently an old pal. Here, you’ll help the famed decorator and her world-renowned crew (familiar faces include Brian, Goran, Liz and supervisor Bill Dur) to jazz up residents’ homes with postcard-perfect furniture and decorations, thereby restoring their cheer.

OK, so the plot’s a little far-fetched. Given the sheer amount of in-game items provided to choose from – e.g. plants, lamps, stereos, counters, windows, wall hangings, etc. – when populating virtual dollhouse-type environments though, we’re willing to forgive and forget. Your job during the first phase of play (Design) being, of course, simply to drag and drop these goods into various rooms, providing an extreme makeover that jives with each homeowner’s tastes. However, picking the right accoutrements and accessories requires first solving a riddle, presented in the form of a short initial description, poem or (in an unexpected turn) photograph that provides clues to individuals’ personal preferences.

For example: One citizen may be looking to turn their den into a winter dance space, requiring that you remove existing clutter, insert a killer home audio system and create a more spacious, modern aesthetic. Another may be starting a home catering business and favor a seasonal color scheme, demanding that you add sinks, refrigerators, ovens and cabinets and color rooms in red or green only.

Challenge comes from the usual constraints. Specifically, the need to mix and match items to boost a customer satisfaction meter to predetermined minimum levels given a limited budget and number of objects you can place. Thankfully, you can always click on Dee for hints as to patrons’ preferred layout – a good thing, since puzzles here are more difficult to noodle through than in prior entries. But in a cute twist, a candy cane-shaped “cheer” meter also introduces a new wrinkle, requiring that you further add a certain number of holiday decorations before advancing.

To play Grinch’s advocate, it’s pretty cheesy to be forced into needlessly strewing candles, wreaths and Christmas lights about. Then again, cosmetic appeal is the name of the game, right? While we’re at it, so is exploring your festively creative side, as evidenced by the ability to customize your own home at-will and collect snapshots of projects for your virtual portfolio.

Once all goals have been met in the game’s initial round, you can proceed to the second phase of play: Building, wherein a team of supporting characters – represented as cartoon figures on-screen – races to construct each design.

While wholly familiar to series vets, the process (drag individual team members to outlines of objects to have them assemble all items within a set number of days) does sport some new additions as well. For instance, as its time management-style scenarios unfold, you can use eggnog – instead of coffee, the previous beverage of choice – to restore workers’ stamina, as indicated by dwindling health meters.

A Carol-oke (karaoke) machine power-up has also been added, which causes one worker to stop and sing horrible covers of jingles like “Oh Christmas Tree,” granting his/her two peers a speed boost for the duration.

But small touches such as these plus a seasonal soundtrack, oodles of optional decorative items and a host of endearing fireside backdrops featuring falling snow and leafy evergreens do little to alleviate existing complaints. To be blunt: We’d gladly trade a wealth of the identikit paintings or ornaments offered and stars’ horrible singing for a more workable menu system, with the current user front-end often requiring that you scroll through dozens of objects to find the one single item desired.

Likewise, why does every last little object (including potted plants and garlands) need constructing, especially when many are so tiny it’s hard to accurately assign builders to them? Once again, workers default to wandering off at the most annoying times when they’ve completed a task too. And no – we still can’t tell you why it’s periodically necessary to hand one a drill or paint brush to assemble the unlikeliest of items, i.e. a bush or rug.

More Xmas-themed director’s cut of predecessor Home Sweet Home 2: Kitchens and Baths than proper standalone outing, one should nevertheless give props where it’s due. While unlikely to dazzle those who’ve purchased a title in the series before, mainly offering a fresh coat of paint, wider inventory and a handful of throwaway play renovations, let’s be honest… Shameless seasonal tie-in or no, this is still the most comprehensive edition of one of the best home improvement titles on the market, making it a worthy companion on a long, cold winter’s night.