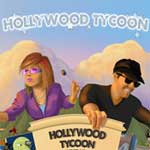 Have you ever watched a movie and thought to yourself, "Hey, I could do better than that!" Now is your chance. Hollywood Tycoon is a tycoon game that puts you in the shoes of a big league movie producer, managing scripts, sets, and actors in a whirl.

The plot is simple. When your uncle Irving Goldfish dies, you inherit his run-down movie studio. Can you make it a smashing success, or will your films flop?

As with most good tycoon games, the rules are simple, but the strategy is complex. If you want to succeed, you’ll need to think on your feet and figure out a system that works best for your studio. The first thing you need to do when you start is to build a trailer for actors, a hub for writers, and a set department. Upgrading them is a huge part of the game.

Before you can make a movie, you need sets, scripts, and actors. Different sets have different attributes, and some are clearer than others. For example, it’s easy to guess what would be filmed on a Science Fiction or Western Set, but more complicated to know what works on a New York City or Small Town set. If you’re curious, small towns are associated with horror, comedy, drama, and romance. NY is similar, but swaps crime and action for comedy. It’s not always intuitive, but you catch on eventually.

Once you’ve got a set, you need to pair it with a script. On the top of the screen, you’ll see blue scripts scrolling by. Click one to view its attributes. If you find a script that matches your set and fits with your budget, drag it onto the film set. You’ll earn more for matching these properly. If you’ve upgraded your writers, you’ll have access to scripts that have more attributes and earn more cash.

Next, you get to cast actors. Actors also have attributes. Your goal is to match the actor with the script. The more they match, the more you’ll earn. If you upgrade your trailers, you’ll have access to better (but more expensive) actors.

Once you’ve got everything set, click the button to start the film. This takes a few seconds. When it’s ready, a film strip will appear and you get to see how you did. As you’d expect, the goal is to get your profits to snowball into a whole lot of cash. If you want to take the chance, you can also ask for critic reviews (which are randomized), but negative reviews mean loss of profits.

At the end of each year, you’ll be given the chance to buy wood (needed for upgrading the sets and studio), and film (needed to make movies). If you run out, you’ll need to advance through the year to buy more.

One thing that isn’t made clear in the tutorial is that you must continually repair your sets and studio. If you click on any area, you’ll be shown the cost of doing this. Everything declines gradually, so there’s no getting around it. If you fail to do this, things can break and cost more time and money. You can’t tell by looking at a set how badly it’s declined, and will only be prompted for repairs once it’s totally broken.

What really stands out about Hollywood Tycoon is the pace. It can be extremely hectic if you choose to build many sets and film multiple movies at a time. However, if you aren’t into fast paced action, you can slow things down by carefully selecting your sets and filming only one thing at a time. You aren’t forced to move faster or slower than you like, which makes the game extremely flexible and fun, no matter what your skill level. The length is also excellent, offering hours and hours of gameplay.

The production values are also pretty high. If you’re into sound effects and good music, there is plenty here. The 2D cartoon graphics and animations are nicely done. As for the user interface, it’s friendly, and you should be able to figure things out quickly.

On the down side, the tutorial is a bit glib. You’re left to figure out many of the finer details on your own, either by reading the help file, or by trial and error. This isn’t a problem, but it means you need to think a bit as you learn to play. It can also be very repetitive, since you don’t change locations over time. It’s basically the same screen, and the same actions, over and over. Because there’s plenty to do, it’s not boring as such, but it’s worth mentioning it if you like variety in your game.

On the whole, Hollywood Tycoon is fun and fast paced tycoon game that is suitable for beginners, yet challenging for skilled players. With lots of flexibility and plenty of strategies to employ, it’s one of the better tycoon games out there, provided that you don’t mind a bit of repetition as you play.