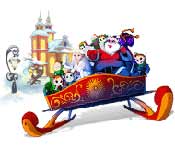 Everyone knows that the holidays are a magical time of year. And what better way to celebrate them than with Holly: A Christmas Tale, an interactive scavenger hunt that sees you helping save Santa and his elves’ jolly behinds? Just be sure the entire family is gathered around the PC before attempting to tackle the adventure… stunningly depicted and atmospherically charming as the quest is, it’s bound to give solo players the gift of extreme aggravation.

Oh, how we want to love the game for its base merits, for there are many. Think 25 gorgeously-rendered levels from homes to toy stores, groceries and workshops to scour for more than 1000 whimsical items, with everything portrayed via first-rate, hand-drawn cartoon visuals. (Including plot interludes, displayed between stopovers on a campaign-style map as a series of brightly-colored comic book-style panels.) Don’t forget the brilliant soundtrack either, whose jaunty tunes will have you humming along with pleasure as you happily click away. But most important, truthfully, is simply the sheer variety of tasks you’ll face while attempting to aid old Saint Nick.

Frankly, we’re stunned and delighted at the amount of pure creativity that’s gone into the quest’s level designs. For example, on one stage, you might find yourself attempting to pick out assorted items – toothbrushes, toasters, boots, etc. – that don’t belong in a Christmas-themed environment. The next may instead demand you track down all the types of fruit hiding amongst a grocery store’s well-stocked cupboards or require that you find toys or clothes based strictly on their silhouette.

Still more advanced scenarios deviate from the basic formula entirely, requesting that you locate any and all objects that look like fairies’ wands or pick out the right bag for a trip to a distant country. Additional vignettes even involve spotting differences between two seemingly identical scenes, with mirrored cursors aiding in the smile-inducing endeavor. All told, one never knows what to expect as they travel to various locales helping blond suburban mother Holly help the world’s children.

The trouble is that the game was designed either by sadists, or some of you-know-who’s little helpers who’ve been quaffing a bit too much eggnog. More specifically, it has approximately three difficulty levels: Annoying, absurd and “If I get my hands on that fat, jolly old man, I’m going to give him a piece of my cookies and milk.” You see, some objects look nothing like you’d expect, e.g. bottles of lemonade that are orange and red. Others are completely hidden behind other items and impossible to spot without using your limited supply of hints. (Which, we might point out, can be replenished by spotting three fir cones ferreted away on certain backgrounds.) Yet more are obscured to the point you’ll literally have to look for a tiny black dot the size of a ladybug’s toenail. Some items you’d think would be clickable – such as cherries on the “click the fruit” challenge – are actually worthless decoys to boot.

Likewise, genre leaders such as the Mystery Case Files titles give you three or four locations to scour for 30-odd items out of a possible 40, say, total before allowing you to progress. Not this bad boy; instead, you’ll routinely have to find ALL 25-odd objects at a single locale just to move forward, right from the tale’s outset, which most users will find less than encouraging. But as you might have guessed by now, logic’s not a strong suit here in general: OK, we’re cool with having to look for a kangaroo-branded bag for a voyage to Australia, but are most folks really going to realize the one for Mongolia features drawings of a bow or Austria’s carrying case is rocking images of a bodybuilder?

It’s a crying shame, really; we absolutely adore everything about Holly: A Christmas Tale, apart, of course, from these inexplicable foibles. And maybe, just maybe, it was the creators’ subconscious decision to produce a title that would inevitably cause the whole clan to convene wide-eyed before the soothing glow of the desktop monitor this chilly winter – the best present of all. Because honestly, that’s the only way you’re going to get through this one without jamming a super-size candy cane through your computer screen. And really, given those troublesome Naughty and Nice lists to be all extra-worried about at the moment anyhow, what would Santa think of that?