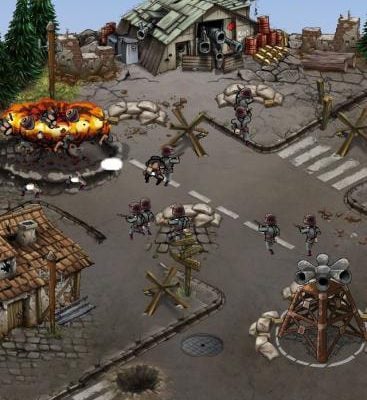 Hills of Glory: WWII captures all the horrors of war in an adorable cartoony package. OK, not really – but it’s still fun.

So there I was: stuck at the top of the hill, with nothing but my rifle to protect me and my wits to keep me calm. Coming towards me were more men and tanks than I’d ever seen. As the odds became more overwhelming, I became increasingly frantic, attacking the soldiers more and more recklessly. And then, without warning, it became too much and I was overrun. Naturally,I wanted to take another crack at my opponents, so I booted up the same level in Hills of Glory: WWII, a great new defense game on the iPhone.

If you’ve ever seen the movie Inglorious Basterds, then the setting of Hills of Glory: WWII will sound instantly familiar: a lone sniper is stuck fending off an entire army, with only a couple of guns to keep his enemies at bay. As the adventure continues, though, the gunman gets some help from some new teammates, who all have unique weapons at their disposal.

At the top of the screen is a bunker (presented in different forms, depending on the map- in one instance, it’s a truck, in another, a downed airplane) that wears guns like a porcupine wears quills. Players have to prevent enemies from wandering up the map and getting behind cover so they can take potshots at the base. Initially, players only have a rifle to pick off oncoming soldiers with, but new weapons (with varying recharge times) are unlocked as the game progresses.

Now here’s where things get interesting. New weapons are actually provided by buying new soldiers, who each have different types of attacks. Between each level, players can assemble different teams and increase the power of the soldiers on their roster. Hiring the help and increasing their attributes can be done two different ways. The first method requires players to earn gold coins and increase their military ranks by progressing through the game. Alternately, players can use piles of cash (which can be either earned or purchased with real cash via an in-game store). New missions also have to be purchased in the same way.

There are a bunch of different ways to defend the bunker, and each one requires a different type of touch interface. Tapping an enemy will fire the rifle, dragging a vertical line will unleash a hail of machine gun fire, holding down on the screen will launch a grenade, etc. It’s actually kind of surprising just how varied the commands are. However, it should be noted that not all these attacks always work: there were several times when dragging two fingers down the screen to bring in a helicopter gunship instead prompted the wave of machine gun fire. 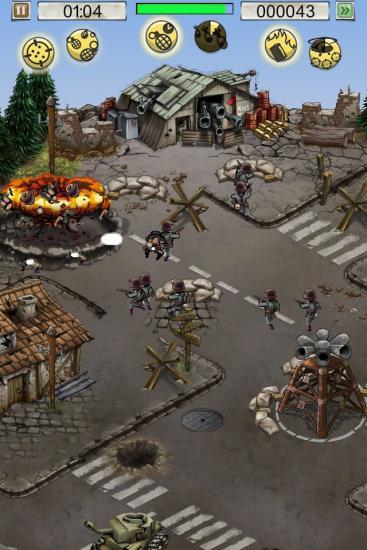 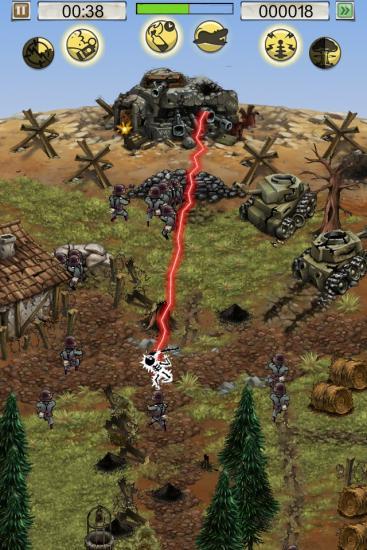 Currently, there are only two game modes available. The first is the standard campaign, which takes place across several different maps. After this, there’s the quick play/survival mode called “Fire At Will” which is… well, it’s pretty self-explanatory. It’s a shame there aren’t more modes available, because this seems like the kind of title that would benefit from a good variety of game types.

In terms of production values, it should be noted that Hills of Glory is pretty impressive. The graphics feature an exaggerated, slightly-goofy style, and the animation is really smooth. Colors are really bright, too, and each map features substantially different (and imaginative) designs. On top of that, the music is also fairly appropriate thanks to its sweeping military anthems.

For better or worse, Hills of Glory: WWII is a lot like Babel Rising (another unique defense game from Bulkypix). On one hand, it’s got some really solid production values, increasingly frantic gameplay, and some really interesting RPG-like elements. That said, it’s frustrating because it doesn’t always feel like strategy is the focus, with button mashing being a more effective technique.