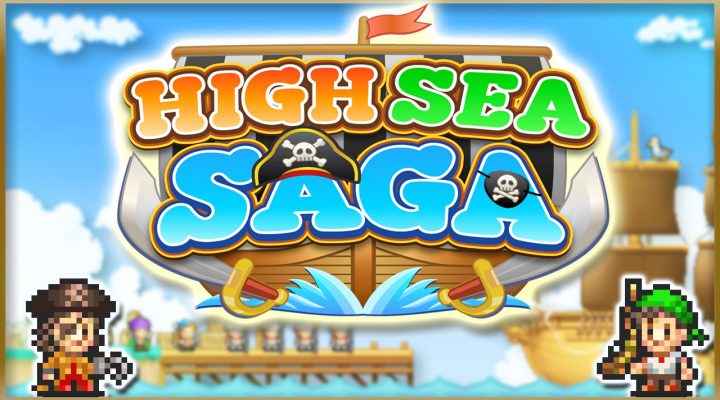 A meat and potatoes RPG experience

Stamina requirements may deter some players.

I have seen a number of Kairosoft games pass through Gamezebo, and always thought how rather cute the games looked. With little pixel people doing little pixel people things (from racing horses to running farms) the Kairosoft games have always looked like a good time. With the recent release of High Sea Saga, I figured now was as good a time as any to finally jump in and experience the games that so many other players have come to enjoy.

Following in the footsteps of previous Kairosoft games, High Sea Saga is a management RPG where players must assemble a crew, a ship, and maintain the economy of the two; all while exploring the seas on the hunt for treasure. 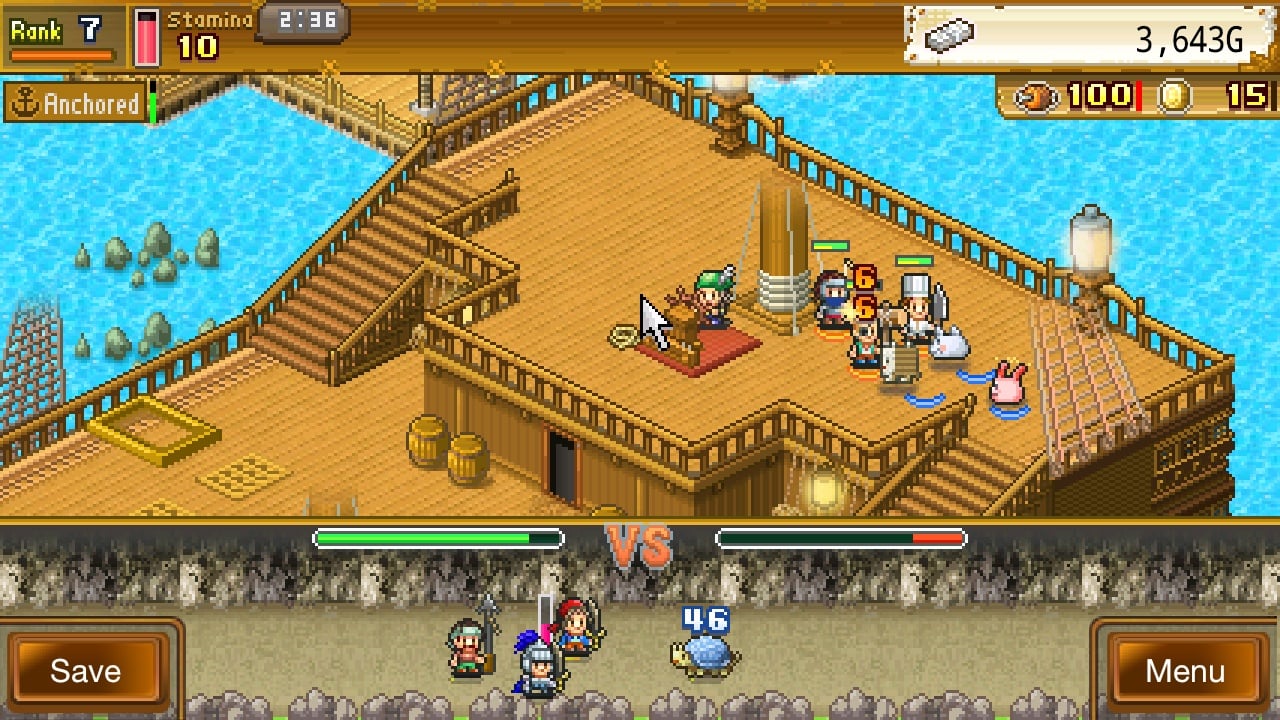 There are a handful of character types that players can recruit to be part of their crew, and each one comes with their own unique perks and abilities. For example, recruiting a Trader allows the player to construct an items shop on board their ship, while recruiting a Joiner decreases the construction time of objects. Recruiting crew members is as easy as visiting the tavern and selecting whoever is currently looking for work. Acquired crew members will gradually level up with use, and can be given special abilities that can further increase their usefulness.

Once the crew is assembled, players can go on quests that involve battling monsters and other pirates. These quests progress in traditional RPG fashion, though once the party is sent away, there is little interaction with them besides watching them succeed or fail. Players do all the strategic planning before the quest even begins. For those of you who are poor planners like me, this means you’ll be repeating quests more then once, rather frequently.

Even though you won’t be micromanaging battles, you can still micromanage the rest of your crew and ship, while the questers are off searching for loot. A number of constructs can be created beneath the ship’s deck, all of which serve one purpose or another. Occasionally players will even find that monsters have crept up on deck and if the combat party is away, you’ll have to turn to your cooks and traders in order to clear your decks of the monsters. With that said, it’s always a good idea to keep an eye on the stats of all of your crew members, as you’ll never know when they will need to react to various situations. 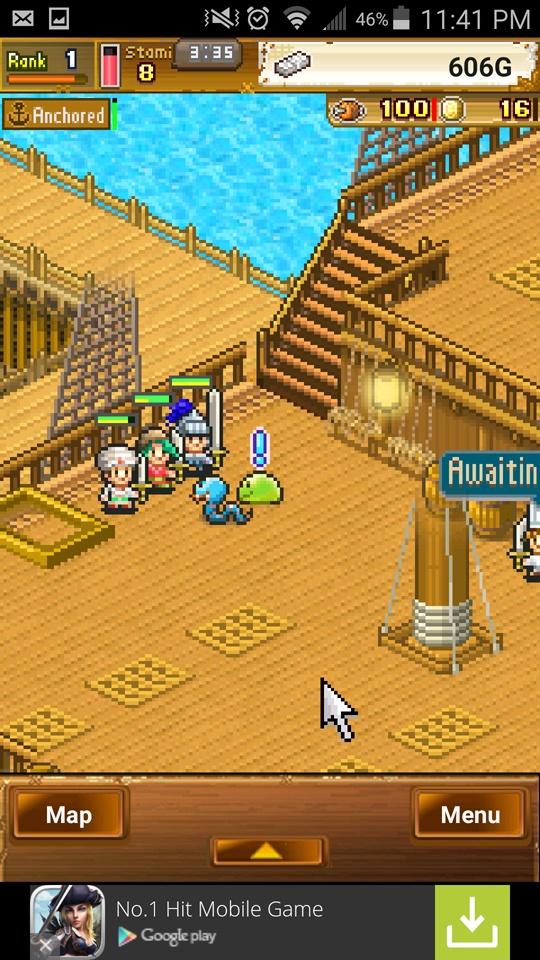 With a good amount of experience with various RPGs, I fell right into the game’s terminology and mechanics. What ended up being a difficulty for me was navigating through the game itself. Due to the game’s tiny nature, typically only one menu will be displayed at once. This means that comparing items on crew members, or comparing crew members to other crew members, is a hassle. There were times where I counted that I had four menus up, all layered on top of one another, after I had been tweaking my combat crew’s equipment.

The gameplay screen is further reduced by the persistent presence of advertisements at the bottom of the screen, —as well as the occasional full-screen pop-up. For a game that encourages players to check back often to make sure your crew is working as efficiently as possible, having the game start up and immediately launch a 30-second advertisement for another game  gets annoying very fast. 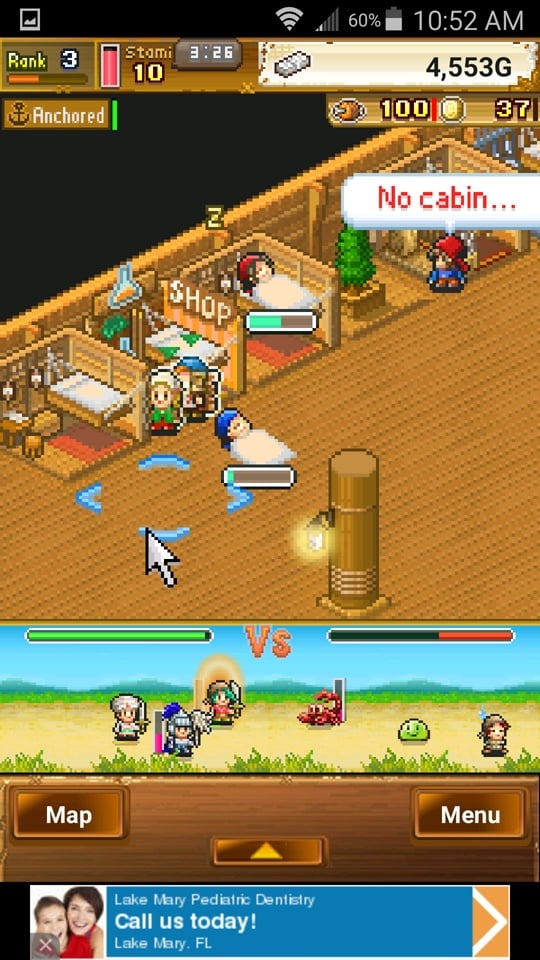 The option is there to remove ads, but it’s $1.99 per month to play the game without ads, on top of the 99-cent price of admission just to download and begin playing. I get the feeling that Kairosoft is testing the waters with this new subscription system, as it doesn’t seem to be present in any of their previous games.

Beyond the IAP-subscription to remove advertisements, High Sea Saga also allows players to purchase stamina, allowing them to complete more tasks in a row. For me, this wasn’t that big of a deal since I only played High Seas Saga for short bursts of time throughout the day, so I always had stamina to go through. But for players who enjoy spending large amounts of time playing in a single sitting, this might be an issue for them… unless they feel like paying.

High Seas Saga retains the same cute charm of previous Kairosoft games, with the added bonus of taking place on the high seas. A few design and economical decisions mar what is otherwise an enjoyable management RPG.