Hidden Wonders of the Depths Review 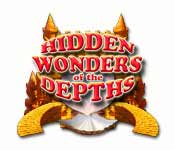 As any keyboard jockey worth their weight in hard drives knows, there are casual games – instantly-comprehensible titles which appeal to a broad audience – and then there are casual games, the sort so leisurely and undemanding you could practically fall asleep playing. Falling firmly into the latter category despite offering a wealth of different gameplay styles and colorful undersea realm in which to play, Hidden Wonders of the Depthsbpredictably manages to entertain, but, as you might imagine, won’t set the desktop world aflame.

What little detail there is story-wise revolves around your quest to reclaim fabulous treasures piece by piece for a desiring mermaid, who tasks you with journeying around a submarine world in the title’s single play mode. Never you mind, though, as it’s all simply an excuse to pair or group similar objects (such as starfish, sea anemones and pearls) in a variety of different challenges, including match-three diversions, mahjong-style amusements, memory-testing scenarios and even the odd hidden object sequence.

If it all seems to be a bit much to cram into one lone outing, rest assured instinct isn’t leading you astray. Quantity, not quality, is the watchword here, as although all of these segments actually perform capably and tie together reasonably well, none proves of outstanding or particularly memorable caliber.

The key problem: Core mechanics are universally borrowed from other, more involved titles. And while on a surface level everything proves perfectly functional, there’s no standout feature or singular aesthetic really helping the outing rise above the crowd.

Sometimes you’re clicking groups of three or more objects to remove them from the board… Others, lifting stones to see if they conceal like items, or swapping tiles to help a gibbering crab (which, sadly, sounds an awful lot like Crazy Frog) by clearing a path to gem-containing treasure chests. Heck, there’s even moments where you’re scouring the screen for turtles and vases (sans hint functions, with failure resulting in complete stage restarts) or solving tarot card-based puzzles (to gain bonuses, e.g. stone-smashing hammers, other games give for free), no less. But never does the total package feel especially compelling, or difficult, save in the latter case for those areas where the designers seem to have made the occasional creative oversight.

Visuals are catchy in a colorful way, with vibrantly-hued fish swimming in the background and boards full of objects that wiggle to provide the odd graphical cue when user prompting is needed. However, the musical score and library of sound effects are highly nondescript and repetitive, and are best turned off within the first five minutes. Still, it’s hard to see who’d really persevere and complete all 210 levels, when – instead of opting for a little something from every category – you could simply find single-genre titles that offer a much more compelling and focused experience.

Furthermore, although time is periodically an issue and you’re only afforded a limited number of lives, Hidden Wonders of the Depths never really pushes the limits of your ability as much as it does patience. As such, the game offers a nice way to wind down after a long day at work more than engaging proposition that’s bound to keep you glued to your monitor. Bearing this in mind, we strongly urge you to consider this before breaking down and coughing up the cash required to grab it.

After all, if it’s variety you want, plenty of casual game providers offer subscription packages that let you enjoy dozens of different outings for a decent price, rather than one that (rather blandly) attempts to cram all into a single adventure.