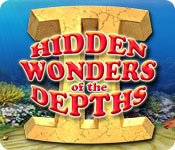 As the saying goes, "Everything old is new again." The statement has never been truer than for Hidden Wonders of the Depths 2. It’s the same game you already bought. Only Hiddener, Wondererer and Depther… I guess.

Hidden Wonders 2 plays identically to the first title. It’s a series of games – a match-three, collapse puzzle, mahjong, hidden pairs, hidden object or sliding picture puzzle. There are a few changes from the first game to the second, but they are minor.

For those of you who missed the release of the first Hidden Wonders game, you are there to help a mermaid by completing different games to help her build something. The first game had you building a house for her. Now, despite the fact that she lives underwater, she wants you to build a boat for her.

Everything about this game screams recycled. The music is literally copied from the first game. (Not a remix, not new music, but literally the same files.) The graphics, while having gotten a minor facelift, are still the same style. Though they are colorful, they lack imagination, particularly when groundwork was laid out in the first title.

What is nice about the Hidden Wonders games is the way in which progress is made in some of the games. The goal of the match-three or collapse puzzle levels involve getting a crazy crab to a treasure. A path lies hidden under the symbols that, when destroyed by a match, allows the crab to move forward. Sometimes, there are multiple crabs that follow multiple paths. Like the first game, the crabs have silly sounds and actions which, while funny at first, can start to get annoying after a while.

While it all sounds interesting, and there are a lot of game modes, Hidden Wonders of the Depths 2 is a case of jack-of-all-trades, but master of none. Other than the crab-track, the match-three has all the traditional trappings (some simple power-ups, pieces that need to be matched more than once to clear, and so on) and nothing that really elevated it. The pair-matching and mahjong are rudimentary. The "bonus" hidden object levels would be alright if it weren’t for the hidden objects shaking, revealing their location.

None of the games present any particular challenge, except, amazingly, the sliding picture puzzles. In a bad piece of game design, pieces immediately lock into place when moved into their correct positions. This means that areas of the puzzle can get shut off from the rest with no way to access the tiles, and there’s nothing you can do about it.

So, what’s changed? Other than a pretty submarine on the title screen and a new-looking map, the game offers Relaxed or Standard modes. (Basically, you can play with or without a timer.) The game also offers a "skip" button that gradually fills up and, if you are really stuck (or bored) you can skip the level. The only time this was very useful was the aforementioned sliding picture puzzle.

In the end, Hidden Wonders of the Depths 2 feels a little too much like a rehash. If you’ve played first game, there is little reason to recommend the second. The first Hidden Wonders game had a lot of good ideas and an interesting premise. Instead of building on that, the follow-up just sinks to the depths.

For similar games, try Hidden Wonders of the Depths, Frogs in Love, and Paradise Quest.