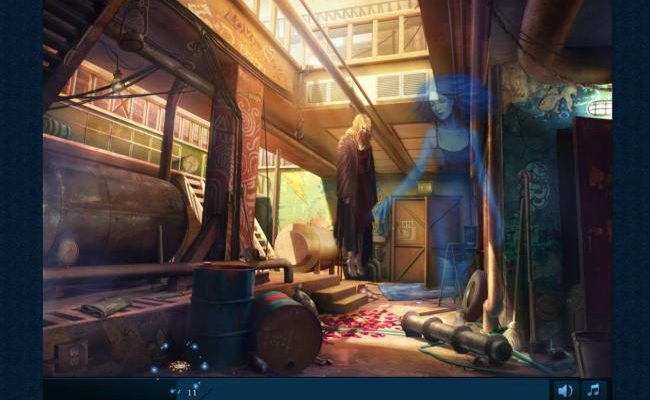 Gracetown is a city dripping in corruption. It’s the kind of place you wouldn’t visit even if there were 100 Batmans living there. You’re an honest cop with the ability to converse with the dead, and it’s your job to clean up these streets: a pretty tall order. But when even death itself can’t hide the truth, you’ve at least got a bit of an edge!

Hidden Shadows is a crime-themed hidden object game that takes the familiar item-hunting formula and spreads it across a freemium Facebook design. You play as the detective described above, helped along by your partner Michael Alder who functions as sort of an in-game tutorial system. From the main menu you can choose crime scenes to visit, each one serving as a key location in your ongoing investigation. In order to solve the crime, you’ll have to work through hidden object scenes, utilize the crime lab, and have some deep conversations with the spirit realm. Spooky. 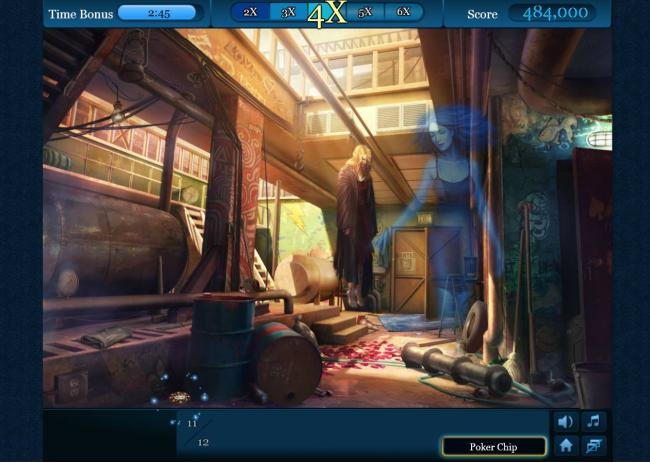 Each hidden object scene presents you with a list of clues to find scattered around the environment. Click to pick up each object one by one, being careful not to mis-click too many times or the game slaps you with a delay. The faster you work, the more points you’ll receive, and hints can give you a nudge if you get stuck. After gathering everything, you’ll need to pick out the evidence and send it to the lab for analysis. Badges are required to use the lab, and you’ll also have to wait a number of hours for the scientists to do their work. Of course, since this is a Facebook game you can always use convenient speed-up tokens to hurry things along. No time to dawdle, we’ve got a mystery to solve.

Currencies in Hidden Shadows come in several different varieties. Energy is the most urgent one, as it determines when you can take on new cases as well as how often you can contact the spirits of the dead. Energy refills slowly over time, but the rate at which you’ll spend it will far outstrip how fast it recovers. Pace yourself, and don’t feel bad bugging your Facebook friends for a little help. Badges are earned by completing hidden object scenes and are necessary to use the crime lab. Passion, Fear, and Memory are less concrete currencies in Hidden Shadows that are awarded each time you complete part of a case. They can be mixed to craft energy, speed-up tokens, or hints, which is both a useful and kind of clever way to move the game forward. 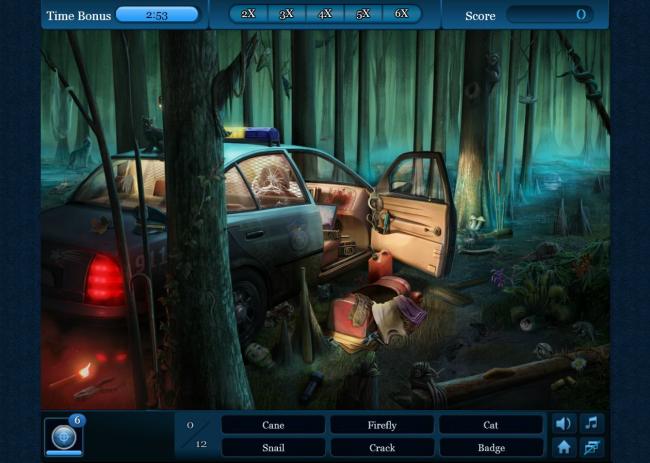 Hidden Shadows has a really nice presentation, including a fantastic soundtrack and some moody pieces of artwork. The downside to this is that many of the clues in hidden object scenes point to really, really vague items. On several occasions you’ll be forced to use the hint button, only to shake your head when it points to the bumpy blur of brown that was supposed to be “horses.” And don’t even think about playing the game in windowed mode, that’s next to impossible.

Despite its overreliance upon in-game currencies and occasionally shifty hidden object scene design, Hidden Shadows pulls through as a great little game. It’s best suited for quick bursts of play here and there, not marathon sessions, but the narrative will keep you interested in solving puzzles and sorting out crime scenes for days on end.