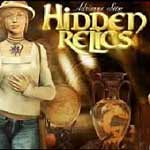 Mix Antiques Roadshow with travel and adventure, and the result could very well be Hidden Relics. This hidden object game revolves around finding lost antiques scattered across Europe with an enemy on the prowl. The game introduces the original concept of unlockable gadgets and finding secret hidden items (on top of the regular hidden items).

Unlocking the gadgets requires winning a specific number of mini-games, and the number goes up with each advancing gadget. Mini-games consist of a jigsaw puzzle, slider puzzle, Tower of Hanoi, rotating puzzle, and memory / concentration. Each puzzle contains five levels with each increasing in difficulty. There are enough puzzles to earn all the gadgets without having to play every level of every puzzle, so it’s possible to avoid playing a disliked game, or at least some of the levels. This is the best part of the unlockable gadgets.

Lastly, the gadgets have the mouse pointer in the middle, partially blocking the already difficult viewfinder. The mouse pointer would work better on the side or not appear at all. It’s a tough task for game developers to find the right balance in creating a challenging game without frustrating players. While the gadgets add a cool interactive feature, they may irritate players enough that they stop looking for the secret items.

The story has two main characters, the professor and her star student, Adrianna. In spite of a well-developed story, the professor doesn’t come across as a likeable character. She’s not awful, but she could be more endearing so players would feel a greater stake in the game.

The high quality graphics meet expectations, but they also disappoint. Many hidden object games use themes or take players on a jaunt around the world. The scenes often mirror the location or theme, but look at any scene in Hidden Relics and there is no hint of where it takes place. Also, many objects reappear in other scenes and often in the same spot. The game favors irons, fans, anchors, and the butterfly statue since these showed up on the hidden objects list in every level.

A gasoline can and a magnifying glass appear in every scene so players can get the needed fuel for their plane and car ride from country to country, and rack up more hints. Appropriately, the gasoline can is easy to find while the magnifying glass proves tricky. In traveling from one spot to another, players use up a can of gasoline. So as a strategy, it’s wise to try to find the secret hidden objects before leaving the country to save gasoline. However, the clock doesn’t stop while searching for these and every chapter starts with a set time for all the scenes and the bonus round in that chapter.

A handbook that describes the antique objects for a scene offers an education on the history and background of such objects. The handbook comes in handy when players come across an unfamiliar or misspelled object on the list. Typos such as “dark board” and “pacaderm” might baffle players. The handbook confirms these should be dartboard and pachyderm.

The music won’t have players rockin’ or swayin’ as they play, but it’s not bad. With one game mode in a tightly interwoven story, replaying the game isn’t likely. However, the game contains 64 levels with the later levels containing over five locations and at least 10 objects in each one. In other words, Hidden Relics lasts a long time.

The faults don’t distract from the overall adventurous experience of uncovering lost antiques. Hidden Relics should satisfy players who are patient and have an eye for details. And experienced players will thrive on the difficulty in finding secret objects, adding new gadgets to their adventurer’s toolbox, and earning straight A’s on their end-of-chapter report card. Though sometimes exasperating, it’s worth playing for the sheer joy of finally finding one of the elusive secret objects.