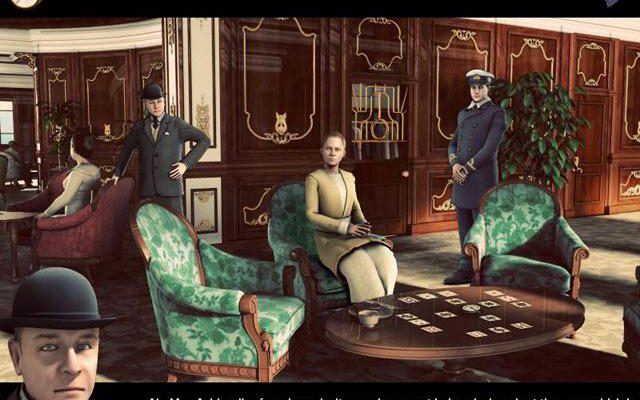 Hidden Mysteries: The Fateful Voyage – Titanic is the latest seek-and-find game from GameMill Entertainment. While the game’s animated cutscenes are surprisingly good, and the voice-acting is halfway decent, there’s little else to boast about.

It doesn’t help that the Titanic theme has been done to death already, with at least two other hidden object games already on the market that deal with the subject matter of the Titanic (1912 Titanic Mystery and Hidden Expedition: Titanic), not to mention James Cameron’s blockbuster Titanic film.

The story, in fact, has some similarities with said film. Margaret, an Englishwoman from a poor background, sets sail on the Titanic with her rich husband Robert (who turns out to be a bit of a cad) to start a new life in New York. The cast of characters also includes Margaret’s mum, a mouthy little cockney boy who’s always underfoot, a rather creepy engineer who’s hanging out inside the belly of the ship for some reason, and a few others. 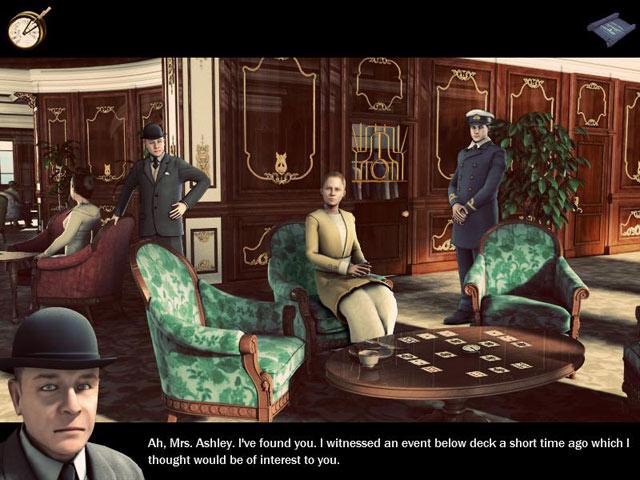 It’s not the most coherent of plots. We all know that the ship is going to sink eventually, so the fact that Margaret spends her time sneaking around the ship, poking into locked doors and boxes, eavesdropping and adding to her junk collection by picking up ping pong balls, turtles, combs, leaves, chalices and wrenches seems a bit ludicrous.

The game basically plays like a much more rudimentary version of the later Mystery Case Files titles by offering a combination of inventory puzzles (where you have to pick up items and use them to solve puzzles in the scene) and hidden object searches, where you zoom in and find a set of objects on a list, which yields one key inventory item.

Solving these inventory puzzles often involves travelling between different parts of the ship via a map. There’s the occasional mini-game, too, such as navigating through a maze in the dark, mastering card games and shuffleboard, and connecting a circuit board.

The solutions to the inventory puzzles can seem rather arbitrary and vague, and the instructions for the mini-games aren’t always spelled out clearly. But ultimately it doesn’t matter because everything in the game can be skipped. Don’t understand a mini-game? Just skip it. Don’t want to read the dialogue? Skip it. Can’t find a hidden object? No sweat: Not only are there no time limits, no penalties for random clicking, and unlimited hints, but you can skip an entire hidden object scene as well and just grab the one object that you actually need. Don’t know what to do next? The game will tell you if there’s anything left to do in a particular room, and if there is, will helpfully highlight the exact object that you’re supposed to interact with. Needless to say, all pretence of challenge, and the satisfaction derived from actually solving a puzzle or clearing a room, is destroyed. 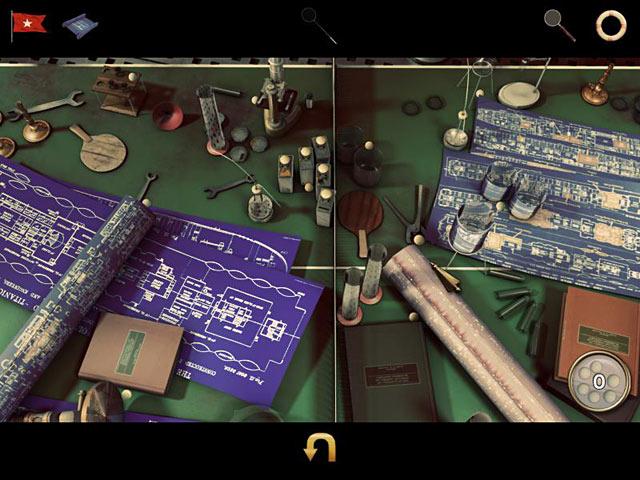 Late in the game you’ll have to make a choice that will lead you to one of two possible endings. So technically you have to play the game twice to see both endings, but the prospect of doing so simply to see one new level isn’t terribly appealing. Funnily enough, the bonus level that you can access after beating the game is actually quite interesting as it delves into some of the history of the ship and the series of failures (both human error and mechanical) that ultimately led to the ship’s demise. But it’s short, offering 5-10 minutes more of gameplay at most.

Unless you’re desperate for a new HOG to play or have a particular obsession with all things Titanic, it’s safe to say you can give Hidden Mysteries: The Fateful Voyage – Titanic a pass.