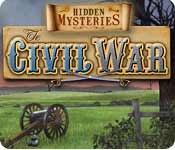 The civil war between the Union and Confederate armies was a bloody and turbulent chapter of American history, and one that Gunnar Games and GameMill attempt to capture in the seek-and-find adventure Hidden Mysteries – Civil War. While a narrative chock full of historical details should be enough to intrigue those with an interest in the time period, the gameplay itself largely fails to hold up its end of the equation, resulting in an uneven effort that doesn’t quite live up to its obvious potential.

The story follows the experiences of three fictional generals, William Walker, Richard Boyer and James Munroe, whose paths intertwine with actual historical events. Gameplay spans the five years of the war from 1861 – 1865, with scenes presented as key battles including Wilson’s Creek, Fort Sumter, Bull Run, Shiloh, Fredericksburg and of course Gettysburg. Clearing each scene involves searching it to find all of the items on the provided list.

Some hidden object games do a better job than others about explaining why exactly you’re searching for lists of random items, but sadly to say, Hidden Mysteries – Civil War makes no such effort. The gameplay seems totally divorced from the story, and too many items are out of place in the game’s supposedly nineteenth-century setting. It’s a shame that historical battlefield scenes, accompanied by stirring music and warlike sound effects, are undermined by having to search for things like pizza cutters, cassette tapes, maracas and even the Eiffel Tower!

Every so often you’ll find letters that need to be de-coded by way of a short mini-game. These letters are fun to read and go a long way in fleshing out the game’s three main characters. I especially sympathized with the plight of Munroe, who went to war to try to impress the father of his love Madeline enough that he would allow the two to get married.

It was also interesting to read about the details that the game provided for each battle, its outcome and its significance to the overall war effort (keeping in mind, of course, that some facts have been altered to accommodate the fictional lives of the main characters, so the game can’t truly be considered a historically accurate educational resource).

You start each year with three hints and can earn more (up to a maximum of five) by playing a grid-based puzzle mini-game called Cannonball, which is essentially a clone of the Windows game Minesweeper. Theoretically, when you use a hint it will cast an aura around an object for a short time to help you pinpoint its location. This proved problematic, however, because the aura is so small and lasts for so short a time that it’s easy to miss it completely and have to use another hard-earned hint just to find the same item.

Another issue with the gameplay is that some of the items to find are truly miniscule in size, which makes them extremely difficult to find without sacrificing a hint. Think a "ladybug" that’s literally a tiny red blob on the screen, or fireflies that are a couple of glowing pixels each, not to mention tiny versions of chalices, hourglasses, arrows and other objects.

Players have a choice of timed or relaxed modes, but no matter which one you pick, the game is on the short side. Not as short as Cooking Quest (another Gunnar Games/GameMill collaboration), but still the kind of thing that a determined gamer can conquer in a single afternoon. There’s little to no replay value either, since once the game is over there doesn’t seem to be any way of playing through again unless you sign in under a new name and start over.

All-in-all, although the game spins an interesting story around a unique civil war setting, the gameplay seems rote and run of the mill.

The Game of Life – Path to Success Review