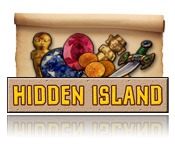 Resembling PlayFirst’s Zenerchi at first glance – indeed, one could argue "heavily borrowed" – Hidden Island is a match-three using concentric circles made up of colored segments. They stack five around, and five deep, looking like a well. The goal is to make matches of three like-colors, either vertically towards the middle of the well, or in a ring horizontally.

If you make matches of four, one colored segment will remain behind and, if matched, will act as a bomb, destroying surrounding segments. However, if you can match five, you are rewarded with a colored medallion in the center that, if clicked, will destroy all of those colors on the playfield. After completing level two, you are able to access the Sun Staff which, if you can make two yellow matches in a row, will destroy an entire ring.

Inside some of the segments – or in some cases, all of them – are odd symbols that help you finish whatever level you are in. How those symbols work, though, depends on the mode you’re playing in.

There are three modes to Hidden Island: Action (a timed mode, where you battle the clock to finish levels), Adventure (collect artifacts and follow a loose story) and Endless (no timer, you cannot lose).

Adventure mode is the main mode of Hidden Island. The story goes that you are sailing on your yacht, and find an island not drawn on your map – a hidden island, if you will. Once moored, a mysterious old man, who seems to be the only inhabitant on the island, says that you are "special." Naturally, you follow him, where he shows you a device with circles on it (your playfield) and says that it is your job to make the island re-appear on the world’s maps by collecting the 40 artifacts which are earned by completing levels.

The goal of Adventure mode is to clear pieces with symbols on them before the timer (again, mimicking Zenerchi‘s timer as a thin ring around the circle) runs out. Bonus points are added by finishing faster, and every eight levels, a slightly-sadistic bonus game of shooting birds with a cannon is playable (or skippable).

Action mode is more frenetic, as you are fighting to keep the timer on the edge of the circle from running out. Fortunately, every segment has a symbol on it, so all matches help you win. Without any impetus, Endless mode is more of a practice mode than anything.

On paper, everything is great. Hidden Island has very pretty hand-drawn graphics and catchy tunes that I caught my wife humming. The mechanic is interesting, and the two challenging modes seem to be winners. So how does it all go wrong?

First off, there is zero variety to the gameplay. Other than self-made power-ups and the Sun Staff, there are no items in Hidden Island. There are no obstacles either, outside of an occasional dark segment that cannot be swapped, and has to be dropped to the center of the ring before it will shatter. But the worst part is the difficulty spikes. I breezed through to level 35 of Adventure mode – not a good thing either – and then promptly got stuck for an hour. Worst of all, though, was The Glitch.

If you have one symbol left, Hidden Island takes pity on you and will spontaneously shatter the last symbol you need. However, if it shatters right as the clock finishes ticking down – complete with horrible ticking sound – it doesn’t register the symbol and stalls. When you restart, the game puts you about ten moves prior, and you’ve lost your flow, probably lose and have to try the troublesome level again.

One important note: In the options screen, there is an option that says "Rotate the circle." This refers to having the rings in the game slowly rotate while you play. It doesn’t really add anything except to annoy, so unclick it as quickly as possible.

It’s a shame that Hidden Island doesn’t fulfill on its promise. There is a great mechanic here, and is a fun play at first. But lack of depth, variety, poor pacing and some quality issues keep Hidden Island from being a diamond in the rough.