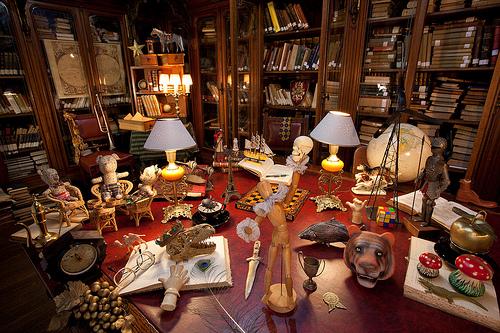 Hidden Haunts is like “Hoarders” meets Count Chocula. Yes, it’s as cool as it sounds.

Remember the hours you spent poring over Where’s Waldo books? Remember how some jerk in your family or at your school library would inevitably circle Waldo with a black marker on every page, thereby ruining the experience for everyone? “Hidden object” games like Hidden Haunts for Facebook provide a potent dose of the hunt-and-find thrills we used to have with Waldo–and you can be assured nobody is going to ruin your fun with a permanent marker before you even get a chance to start playing.

Hidden Haunts is a game about finding hidden objects that have been scattered throughout various rooms in creepy, ghost-ridden mansions. When you spot what you’re asked to find, you click on it. True to most hidden object games, however, progressing in Hidden Haunts isn’t as easy as peering under the couch and pulling out a crumpled magazine. The tchotchkes that you need to find are buried amongst reams of stuff. Almost every room that you explore in Hidden Haunts looks like a tornado hit a Goth Convention and carried the dark paraphernalia to the dry husk that is the town of Lost Haven.

The faster you find your assigned items, the more experience and money you earn. Progressing in Hidden Haunts also results in moving the plot forward. There’s a pretty engaging ghost story at the core of the game: you work with a group of ladies and gentlemen who aim to bring peace to the ghosts of Lost Haven by learning more about them. Of course, this involves rooting through their old stuff and discerning who died, and how.

There’s more to Hidden Haunts than sorting through ghostly trash, however. You’ll also need to calm Lost Haven’s spirits by returning the village to its old glory. This involves buying houses, laying down streets and paths, planting foliage, adding decorations, and much more. Decorating Lost Haven grants you “Insight,” which, in turn, opens up more rooms to explore, and more hidden object puzzles to solve.

This two-sided formula looks well for Hidden Haunts, as for the most part, you’re always left with something to do. There are still some instances of waiting, however. Finding hidden objects takes “Energy,” which recharges slowly–unless you want to pay for an instant refill, or are lucky enough to gain a level. It can also take several hours for some buildings to be assembled, which means building up enough Insight to continue with the core game.

Hidden Haunts’ flaws are small potatoes, though. Making Fun has put together an excellent hidden objects game (with some gorgeous photo-realistic backgrounds and moody music, to boot) that actually stands as an overall example of how to do a Facebook game correctly. Hidden Haunts is fun to play, boasts great atmosphere, and will keep you clicking away at its sinister environments. Theoretically, it’d be nice if ghosts had the courtesy to put away their stuff before getting killed, but then we wouldn’t have a game to play, right?

Realm of the Mad God Review