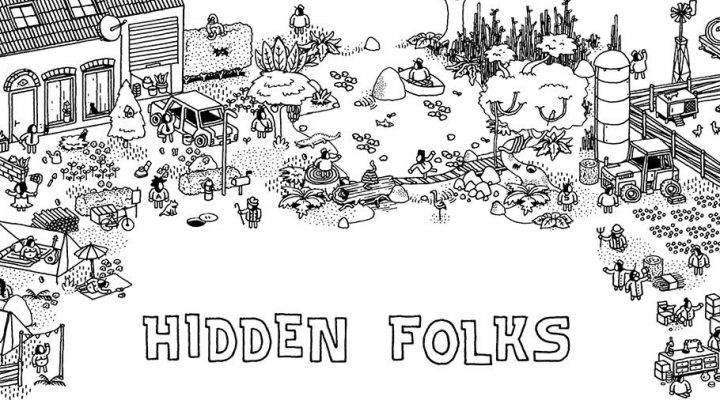 Wonderfully detailed scenes filled with people and objects that are active and alive, moving around on their own and responding to your taps.

The hilarious and varied vocal sound effects set the whimsical and playful tone for the entire game.

The different scenes and locations are greatly diverse, from a spacious and desolate desert to a tightly packed and orderly suburb.

You only have to find a few Folks to unlock the next level, ensuring you'll never be stuck in one place for too long.

A lot of characters and objects do not react to your touch, producing just a default sound despite many seeming designed to respond.

Zooming in or out on busy levels like the Big City is challenging since the game just registers you as interacting with the environment--a dedicated zoom button would be nice.

Hidden Folks is a playful, energetic seek and find experience featuring meticulously detailed scenes packed with tiny people going about their daily business. Each level is its own wimmelbilder, or teeming figure picture, made up of hundreds of individuals existing within their own small section of the space while still relating to the larger, overarching image. One of the game’s current fourteen scenes is a farm that contains apple orchards in one corner and plowed fields in another, connected in the middle by a lumber yard, farmer’s market, and animal pens, each populated by little characters harvesting, stacking, resting, waving, watering, and contemplating as you explore their miniature realm. 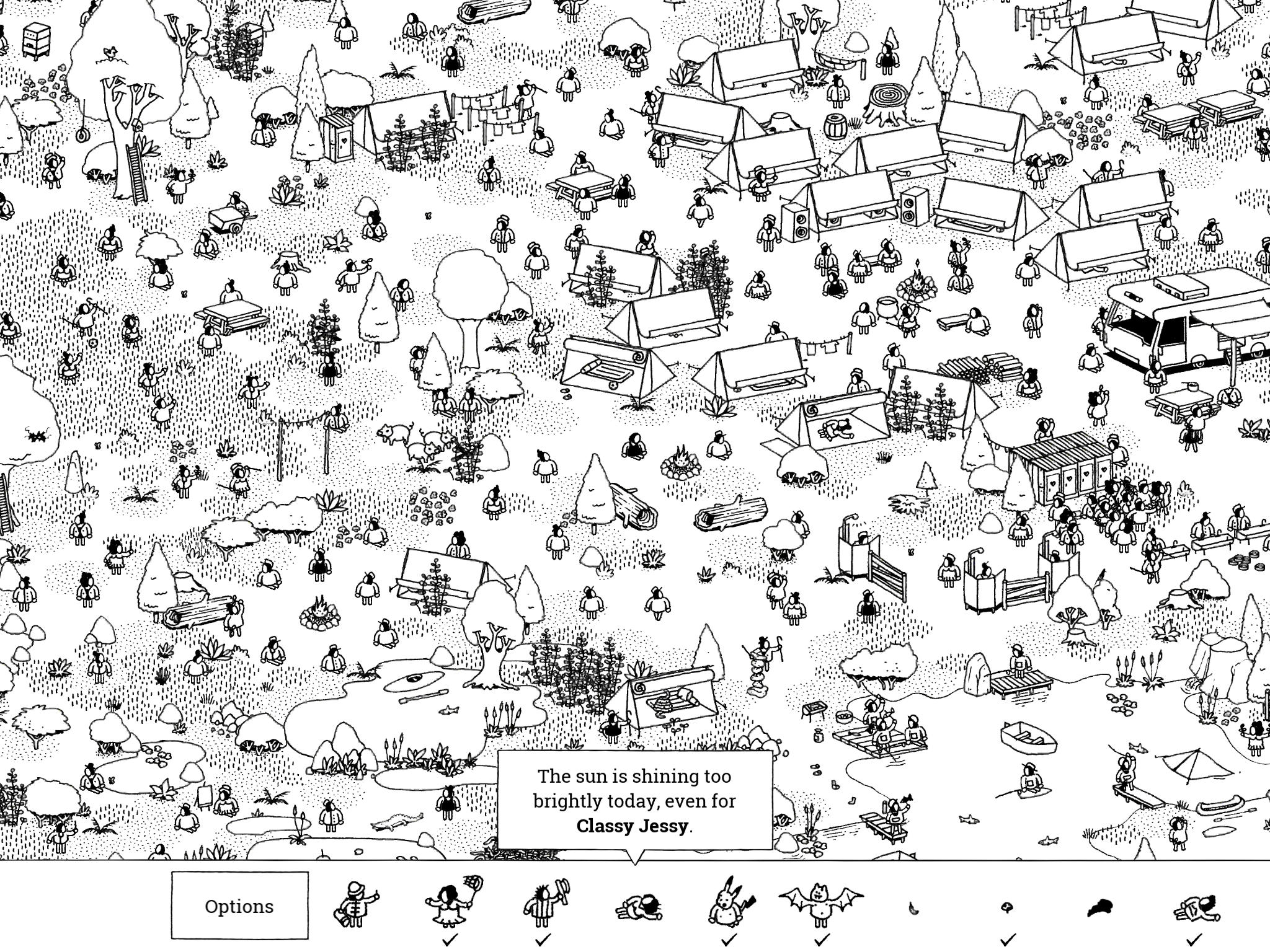 Beyond being exquisitely complex drawings, Adriaan de Jongh and Sylvain Tegroeg have created a world that feels like it exists outside your voyeuristic visits, that continues moving even when you’re not watching. Unlike the overwhelming collages of similar series like Where’s Waldo?, which stuffs bodies into claustrophobic quarters specifically for the visual obstacle it creates, Hidden Folks feels like a livable place populated by a more realistic amount of people. These Folks have room to walk around, jump up and down, and even dance–and they do. And yet this does not reduce the difficulty in finding individuals; it merely shifts the challenge focus from overwhelming cacophony to clever placement and player input.

Each level asks you to find specific individuals that are located somewhere in the scene. You’re given a legend with each requested Folk displayed exactly as they will appear in the picture, as well as a short hint towards their whereabouts. A Folk described as “being terrorized by bees” indicates you should be on the lookout for swarms of insects or beehives. A character that is listed as stuck on a ladder is likely up high somewhere. Some characters cannot be officially “found” until you meet their hinted need; for instance, a Folk who is waiting for music to begin can only be collected after you’ve tapped the nearby speaker system.

This interactive and cause-effect nature of the scenes adds to their sense of vitality. These are not merely static pictures with end goal hot spots stuck in randomly; the world and its inhabitants physically react to your taps even if they are not part of your assigned search. Touch an alligator’s nose and he opens his mouth; tap an apple and it falls from its tree; a seed sprouts into a plant; a mailbox spits out a letter. You can open doors, pull up blinds, cut grass, drag away manhole covers. Everything you touch also produces a sound effect response, whether it’s the “meep meep” of a car horn or the “crrreak” of an outhouse door or the “rarrrwrr” of the now-open-jawed alligator. Not everything moves or makes noise–most people and background objects will produce a small puff of smoke accompanied by a non-committal “toof”—but the items that react do so with the hilariously playful vocal effects of a person saying “moooo” or “bzzzbzzz” or “guh!”

These effects make exploring each scene an utter joy, since even random tapping will provide some sort of reaction, even if it’s just an inquisitive “cheeep?” from a bird or a tent flap opening to reveal it’s filled with butterflies. Every scene is packed with tiny details unrelated to the actual search goals, from a group of dancers that collectively sigh if you turn off their music to Hidden Folk versions of other video game characters (we’ve found Q*bert, an Angry Bird, a Piranha Plant, and the Duck Hunt dog so far). 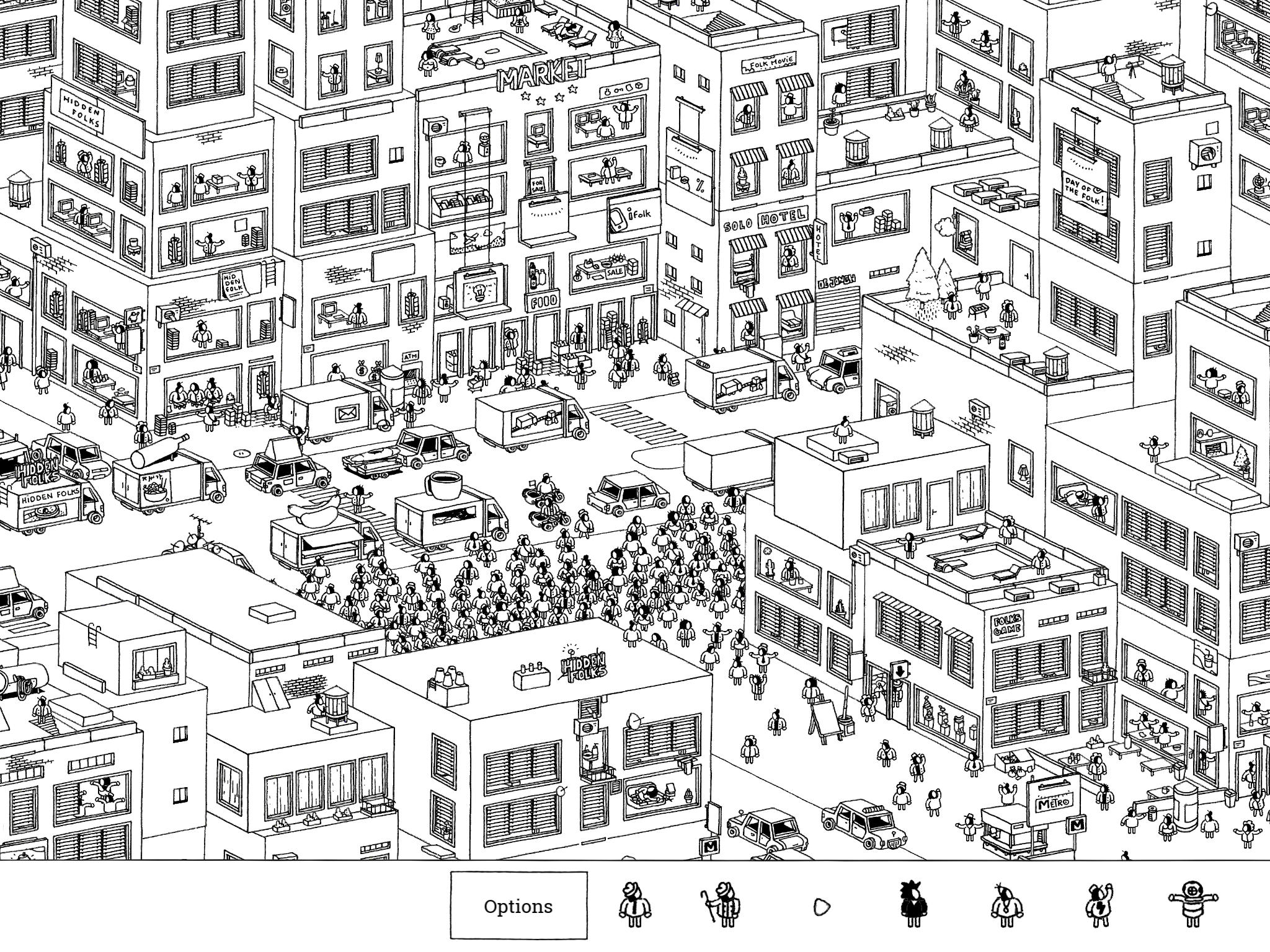 Although—and this almost feels greedy to say, considering the size of the scenes and the amount of detail present in each—we do wish there were more reactions overall. Non-goal characters essentially never react to your taps, producing only the default “toof,” yet some seem designed to interact with. For instance, an archer in the desert stands near a series of bullseyes with his bow in hand, yet tapping him does not cause him to shoot an arrow or respond in any way. A bug trapped in a tent is freed but doesn’t fly away. A street musician already seated at his drum set doesn’t even bother to hit the cymbal when touched. But the many non-responsive “toofs” are only disappointing because the reactionary moments are so satisfying: every time a group starts dancing to newly turned on music, or a cactus tap results in a pained “uhh!,” we smile.

Hidden Folks is really just a long, connected series of smiles earned through its painstaking attention to detail and consistently lighthearted sense of humor. Although it’s technically a seek and find or hidden object game, it should appeal even to players who’ve never been interested in that genre before. Exploring the massive, delightful drawings filled with active characters and creatures is its own reward, but finding the delicately hidden Folks is a challenge that rivals some of the best puzzle games. The Hidden Folks have places to be and things to do; we’re just happy we get to see what they’re up to.