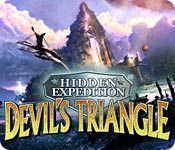 Having already braved the Amazon and conquered Everest, where does an intrepid adventurer go next? In Hidden Explorer: Devil’s Triangle, the organization H.E.A.T. (the Hidden Expedition Adventure Team) has sent you – its top explorer – to investigate the disappearance of a pilot who went down while flying through the treacherous Bermuda Triangle.

Predictably, things start to go sideways from the moment you enter the mysterious triangle. After a submarine accident, you find yourself on an uncharted island that happens to be inhabited! I’ll stop there so as not to spoil anything, but rest assured the story takes plenty of intriguing twists and turns.

Hidden Expedition: Devil’s Triangle takes a page from Mystery Case Files: Return to Ravenhearst by combining hidden object gameplay with the ability to move freely between scenes, pick up inventory items, and use them to solve puzzles in different rooms. A typical scene will have a few objects to pick up, one or two exits that lead to different areas, and places of interest to zoom in on for a closer look, typically revealing either a hidden object scene with a combination of random and key items to search for, or a mini-game of sort some such as a door that needs to be unlocked.

Some hidden object searches involve straight-up lists, while others are clever variations on the formula, such as having to find pairs of related images like a paintbrush and palette, or objects belong to a theme (like "8 items for the magic act").

The game is untimed, and if players get stuck they can use a hint from an infinitely recharging stockpile. Depending on context, the hint will either reveal the location of a hidden object, offer guidance about what to do next, or allow you to permanently skip past a puzzle. Clicking on an item also reveals its silhouette. As if that weren’t enough, the game also keeps a detailed log of everything you’ve done and still need to do.

Like its predecessors Hidden Expedition: Everest and Hidden Expedition: Titanic, Devil’s Triangle boasts attractively drawn scenes complimented by audio that has been well-tailored to the game’s setting and tone. In addition to immersive music and sound effects, there are also smatterings of voice-acted dialogue that enrich the personalities of the various characters you’ll meet along the way.

You can also have conversations with characters by choosing from different dialogue options if you’re interested in learning more about a topic. This is a wonderful way of letting the player choose how much dialogue he or she wants to read through instead of taking the lazy way out with an all-or-nothing SKIP button. If you just want to jump back into the game, you can end the conversation early after the essential information about what to do next has been revealed. Or, you can see what else the character feels like talking about and learn more about the game world.

It’s thoughtful touches like these that make Hidden Expedition: Devil’s Triangle stand out as a great hidden object game. The variety of original puzzles and thoughtfully composed hidden object scenes (as opposed to haphazardly plopped down clip art) ensures that the game feels fresh from beginning to end.

If there’s a criticism of Devil’s Triangle is that I wish there were more of it. Comparisons to Return to Ravenhearst don’t apply when it comes to length, because Devil’s Triangle is a much shorter game with fewer locations to keep track of at a time. Provided you take time to figure out all the puzzles instead of skipping them, you can expect a couple of evenings worth of gameplay. Granted, you can replay the game with some of the hidden objects in different spots. Devil’s Triangle ends with an abrupt cliffhanger ending, which sort of feels like you just bought half a game. However, if the next chapter is as good as this one it will be worth the wait.