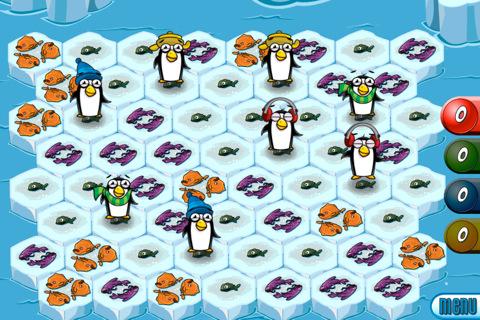 Hey, That’s My Fish! offers all the fun of the board game with none of the lengthy set-up

Being something of a closet board game aficionado, I’m always delighted to discover a new game that I can share with my kids. Earlier this year, on some fairly strong recommendations from my friends in the board gaming community, we decided to pick up Hey, That’s My Fish! A game with simple strategy and charming presentation, it quickly made its way into our family game nights. Now, thanks to Fantasy Flight Games release of an iOS version, we can jump into our fish-hording shenanigans any time or place we want!

Supporting 2-4 players (and offering AI opponents to fill in any spots that may be missing), Hey, That’s My Fish! is a game about collecting fish while trying to trap your opponents on an ever-changing playing field. The “board,” if we can really call it that, is made up of 60 hexagonal tiles. These tiles represent ice floes, and on each floe are a number of fish. Players will take turns moving their penguins, and will remove the ice floe they’ve left behind to collect the fish that were on it. As each floe is removed, the board gets smaller and smaller. Eventually players will find their penguins trapped, blocked, and finally stranded on a single ice floe, at which time they’re removed from play. As you can probably guess, the player with the most fish wins.

It’s a fairly simple game, which makes it great for kids, but it’s not without its strategy either. Trapping other players early on can take a good deal of cunning and forethought, making Hey, That’s My Fish! an experience that can be enjoyed by players of any age. That being said, the experience does tend to skew towards a younger demographic. Still – that’s not to say that the wife and I won’t break the board game version out from time to time while the wee ones are long tucked away in bed.

Fantasy Flight Games recently acquired the license for the print version of the board, and they’ve made a few simple yet favourable changes to the game that have all carried over here. For example, while the previous version of the game had all the fish appear in purple, this new version has a different color for each grouping of fish, making their numbers easier to identify at a glance. Likewise, the penguins in the previous versions had something of a menacing look to them, whereas Fantasy Flight’s iOS edition offers a cute-and-cuddly, kid-friendly vibe – something that’s a perfect match for the game’s audience.

In addition to the standard layout that most veterans of the board game are accustomed to, Hey That’s My Fish! HD offers up a variety of different configurations for the tiles. There are 15 different layouts in total, and while only one of them is available at the start of the game, the others are quickly unlocked by completing in-game achievements. Much to our surprise, however, these achievements remain in game, as Hey That’s My Fish! HD lacks Game Center integration.

We were also a little surprised by the complete lack of online multiplayer. While playing with friends locally is always preferred, sometimes you just don’t have that option. And while we can understand why some board games might wish to avoid online play due to the length of play and the likelihood of dropouts, a game of Hey That’s My Fish! is almost always completed in less than 5 minutes, making it an ideal candidate for online gaming on the go. 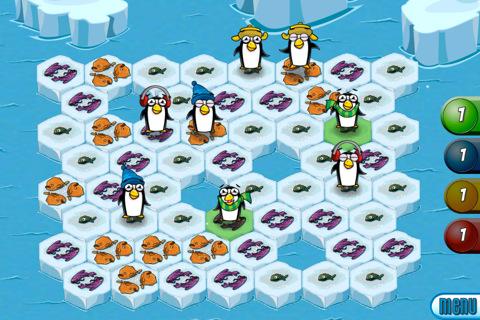 And as long as we’re on the subject of things that seem to be missing, it would have also been nice if there were a fast-forward button for the times when you lose all of your penguins early on. While the AI doesn’t take too long to play out a round without you, it’s no excuse for not including a shortcut to let you speed through to the end when you’re completely out of turns.

And while it might have been a stretch to expect it, we would have really like to have seen an option to switch on the fan-favorite “Pushing Penguins” rule twist, where your penguin can knock an opposing penguin off their ice floe and into the water.

Still, despite a few gripes about what isn’t in the package, we’re absolutely delighted with what is. The presentation is adorable and well-polished, the gameplay is fast-paced and well-suited for the touch screen, and there’s a wealth of tile configurations to keep things feeling fresh game after game. And the best part? The iOS version doesn’t take 10 minutes to set up like the print version does.

If you’re looking for a great board game to play with the kids, or even just a simple pass’n’play game to keep your co-workers entertained at lunch, Hey, That’s My Fish! HD is well worth the price of admission.