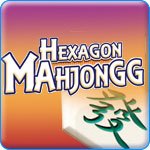 Solitaire mah jong, also known as Taipei and Shanghai, has kept people busy for decades, especially since the 1990s when Microsoft released Taipei in its Windows Entertainment Pack. Since then, the game has spawned many variations that offer tile designs ranging from sports teams and cartoon characters to flags and holiday themes. Hexagon Mahjongg attempts to introduce something different with hexagon-shaped (six-sided) tiles.

Hexagon Mahjongg doesn’t earn the distinction of being the first to use the hexagon shape. Zen Games beat it to the punch, and contains superior graphics too. In fact, the only things Hexagon Mahjongg has over Zen Games are game modes and more tile designs, backgrounds, features, bonus tiles and options.

The game works in the same way you expect of a solitaire mahjongg game. Find pairs of tiles without barriers surrounding them to match them. The objective is to clear the board by finding all matching pairs. Instead of playing with four-sided tiles, though, this game comes with six. For a tile to be removable, it must have at least three contiguous sides open without any other tiles touching them. A tile that has three other tiles touching every other side isn’t available for the taking.

Hexagon Mahjongg comes with five modes. Classic involves your basic pair matching. Classic Bonus takes the Classic game a step further by adding bonus tiles that can stop the clock, switch tiles of your choice, shuffle the tiles, and get free hints. Oh, whenever you use the stop clock bonus, the clock blinks and the timer also appears over the clock tile. Very distracting.

In Adventure mode, you can play five, 10, 25, 50 or 100 levels. For the most part, it resembles playing Classic Bonus with multiple levels. There’s no story or anything special except that the clock keeps ticking until you finish the last level. Memory mode has you flipping tiles over until you find matches – a difficult task especially with many tiles. Quickmatch works like memory except all possible matches appear face up, so you don’t have to work hard at memorizing anything.

Tile layouts can either be random or selected. In other words, you can select the layout you want or let the game do it. There are seven tile designs in the game, with variations of the tile’s shading. Actually, it looks more like two major tile designs, with the special tiles getting most of the makeover.

While the thought of working with six sides sounds challenging, bigger problems await. First, the tile designs look clunky. Although the game contains various tile designs, a few of them make it hard to identify the flowers and seasons so that it turns into a guessing game whenever you see tiles without numbers. While the tile graphics don’t impress that much, the game does come with some gorgeous ones — especially Four Winds and Glass Characters.

When rolling the cursor over a bonus tile, a pop-up appears to tell you what it does. In one case, the bonus tile’s pop up stayed up permanently and wouldn’t disappear after finishing a level. The only way to shake the picture was to return to the menu and play again, except you lose all progress any time you go back to the menu.

It didn’t take long for the music to turn bothersome with its emphasis on higher tones. Sound effects hit their cue with your movements.If you opt to turn the music off, the next time you play the game you’ll need to turn off the music again as the settings reset every time you exit.

With an influx of solitaire mah jong games on the market today, Hexagon Mahjongg doesn’t make top list. The game works and offers many options, but that is about all it has going for it.

Gamezebo tip: If you like this kind of game, check out Zen Games, Alice’s Magical Mahjong, Mahjong Roadshow, and Luxor Mahjong.