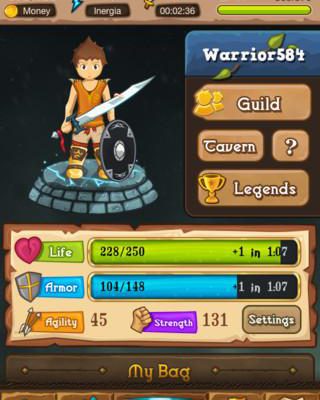 Heroic Legends is neither heroic nor legendary, but does have some fun elements worth checking out

With new ways to interface with electronics come new paradigms for how games are played. Therefore, it’s an exciting time for both social and mobile gaming. Fabulapps (gotta love that name) takes elements of various social games such as the original Mafia Wars, and builds on an emerging genre that isn’t quite perfect, but still a meaningful step in the right direction.

Heroic Legends isn’t a role-playing game in the traditional sense. There’s no story – not even a true overworld. Players simply create a character and progress via a menu system. There is a quest map for guild leaders, but gameplay is otherwise very straightforward and fairly limited.

Character selection determines your starting stats, but each time you level up you’re free to divvy up points any way you like. Included in building up your character’s performance in battle are the abilities to replenish the energies (inertia for completing tasks and bravery for attacking other players) that actually allow you to continue playing the game.

Though now a prolific part of social gaming, I still find it disappointing when gameplay is distilled down to merely tapping a menu tab repeatedly. That is essentially what completing tasks in Heroic Legends entails. You’ll select a job and attempt to complete each task to 100 percent, earning gold and experience along the way. Once you’ve maxed out a given task, you can continue to rework the task for even greater rewards. But no matter how you slice it, players are still just tapping through menus without ever truly being engaged.

Attacking is a little more involved, since players have various options when it comes to how to spend their bravery. A list of players will pop up under the attack tab, and you can view their win/loss ratio and equipment in order to help you determine the outcome of a given battle. Unfortunately, there’s no way to look at the actual character stats (strength, health, armor, etc.) before attacking other players, which makes the entire process a bit of a gamble. Luckily, you can choose to invest a larger portion of your bravery into special attacks that add bonuses to strength, agility and/or armor. 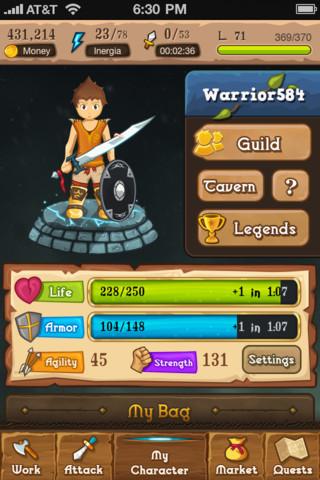 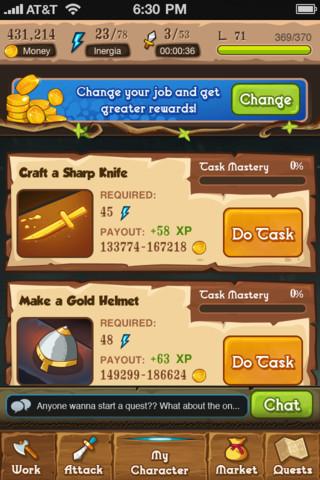 Lastly, players are encouraged to either create or join a guild. Once part of a guild, you can work together on quests. Quests are generally comprised of winning a number of battles, completing certain tasks for a given job, and purchasing a specific item. A chat feature allows you to communicate with members of your guild, and for a mobile MMO (massively multiplayer online game), Heroic Legends has an impressive social offering.

The presentation is attractive, with some cool animations and a fun, inviting look, but the game isn’t pushing the hardware by any means. The sprite work is generic, but character appearances do change when adding new types of armor or weaponry. The musical themes and sound effects are equally unoriginal, though the fidelity is clear and satisfying.

Heroic Legends, for all its simplicity, is still an oddly enjoyable companion. I hesitate to call it a complete game, but as a sort of virtual pet with RPG trappings, it’s something mobile gamers might still want to take a look at. The price is right, and the community seems to be thriving.