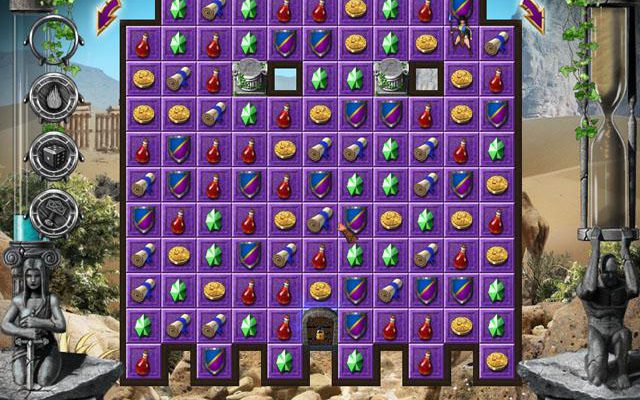 Herofy is a match-3 puzzle game with a RPG veneer, but rather dull gameplay.

In case you were wondering whether or not people were still making games to cash in on Puzzle Quest‘s success a few years back, the answer is yes. Although Herofy doesn’t play very much like Puzzle Quest, it’s still a match-3 puzzle game that goes far out of its way to add a veneer of RPG to the proceedings. While your character doesn’t level up of have stats, you do buy power-ups from a shop, defeat enemies, and collect trophies you can store in your in-game cottage. Herofy just puts more of emphasis on the puzzle gaming part of the RPG puzzler equation.

Herofy can be played timed or untimed, though if you play the game untimed you effectively can’t lose. Each level has a differently shaped board containing the player’s hero character and a door. The hero drops down whenever tiles underneath him or her are eliminated in a match. So to get your hero to the door, you need to use the arrows in the upper corners of the screen to spin the board around. This changes which way is down and makes it possible to guide your hero to the exit. 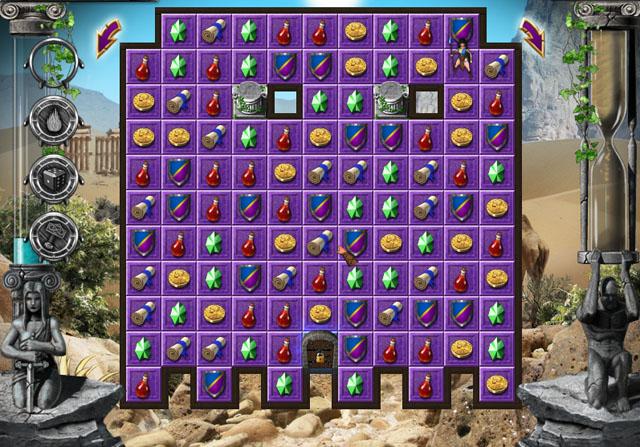 Most levels require the player to meet certain goals in addition to simply moving the hero to the door, which the game expresses by locking the door and forcing you to do things until you get the key. The simplest levels will put treasure chests in the level that you open by guiding your hero toward them. At least one of the chests will have a key that unlocks the door, while the others have gold coins you can spend on power-ups. Other levels have a purple background for certain tiles (but usually all of them) that the hero must eliminate with matches in order to unlock the door.

Enemies sometimes appear in Herofy levels, effectively acting as obstacles. You can eliminate the enemies by dropping your hero directly onto them from above. If your hero ever occupies an adjacent square to the right, left, or bottom of the enemy, it attacks you and wipes out the meter you spend in order to use power-ups. You never have to kill enemies to advance save in the last level, where you must defeat the game’s teleporting boss. That said, it’s usually a good idea to beat them since their presence changes the way tiles drop in inconvenient ways.

Where Herofy falls apart is in the difficulty curve, which just doesn’t make any sense at all. Once you’re out of the game’s tutorial, there’s no real logic behind when levels are easy or hardy to complete within the time limit. There are eight power-ups to buy and you can equip up to four, but the cheapest of them is the only one that you’ll find yourself using regularly. While match-3 games are to some extent usually meant to be relaxing, Herofy is so repetitive it eventually becomes tedious.