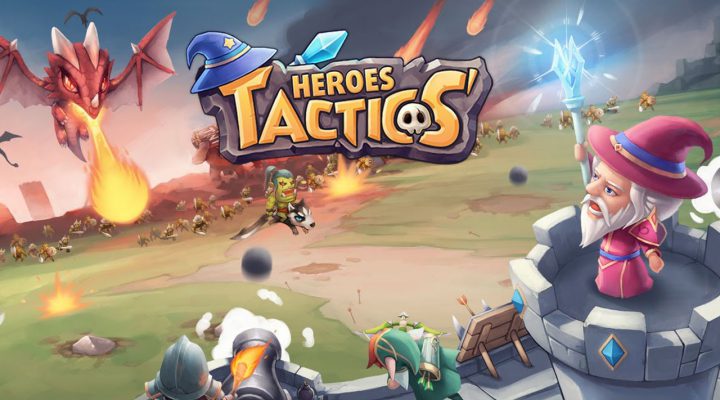 More information on enemies would be nice

Truth be told, I was worried that Heroes Tactics: Mythventures was going to be another, umm… let’s go with “homage,” to Hero Academy. It sort of evokes that style if you’re going by the screenshots and brief video clips. Thankfully that’s not the case, and it’s actually a pretty fun (if light) tactical RPG.

To be fair, the squat, large-headed, cartoony character designs do have a somewhat similar look to that other strategy game I mentioned. Granted it’s not a style that’s exclusive to just one game, but you’d be forgiven for making the same assumption that I did. Regardless, it looks good and you totally shouldn’t let a few visual similarities put you off. 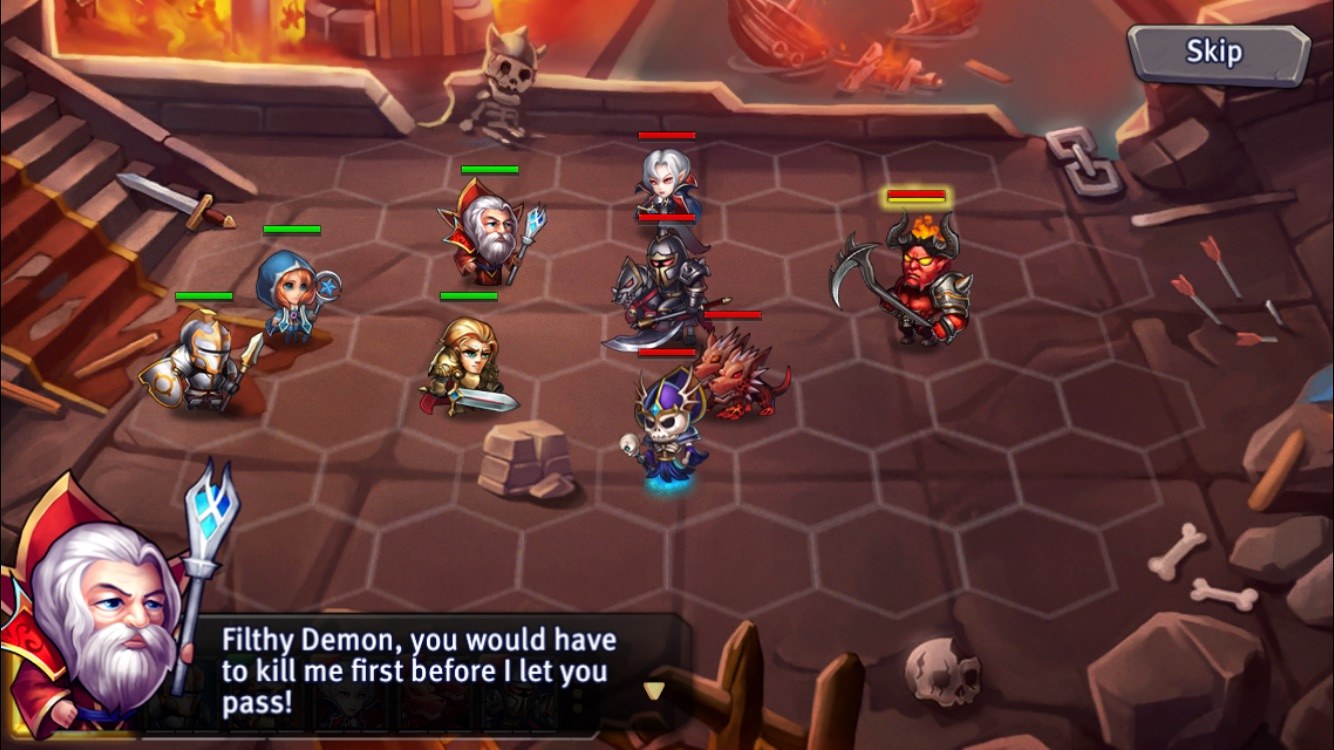 Heroes Tactics: Mythventures focuses more on the characters themselves, really. Everyone can be decked out in stat-boosting equipment, gains levels, may train and improve special abilities, and so on. What’s also really interesting (and a bit weird getting used to at first) is how equipped items are permanently attached to a character, and how once a character is fully equipped they can be “promoted,” which then absorbs the items and stat boosts into them and frees up slots for more equipment. Again, it’s odd, but I’m kind of digging it now that I’ve gotten used to it. It’s like an added layer of experience that sits on top of more standard leveling-up.

All that character improvement is necessary in order to get through the game’s tougher levels, of course. Problem is, those tough levels tend to come out of nowhere. There’s no real curve to the difficulty and no good way to know for certain how challenging a level will be until you try it, so get used to breezing through one stage and then immediately hitting a wall on the next one. Of course if that happens you can always go back and replay earlier levels for more experience and items, but sometimes it can take a while before you can get over those hurdles. Especially if you’re trying to earn three stars.

For the most part the gameplay is satisfyingly strategic, if a little on the basic side. It’s the standard “characters can move X distance, attack at Y range, etc” that anyone familiar with strategy or tactical RPGs has seen before. One key difference is how each character can Defend or Wait instead of moving or attacking during their turn in order to give themselves a bit of an edge in certain situations. For example, having a fast character Wait allows them to take their next two turns in rapid succession – often one right after the other. Defending, on the other hand, allows tougher characters to absorb more damage and then counterattack. 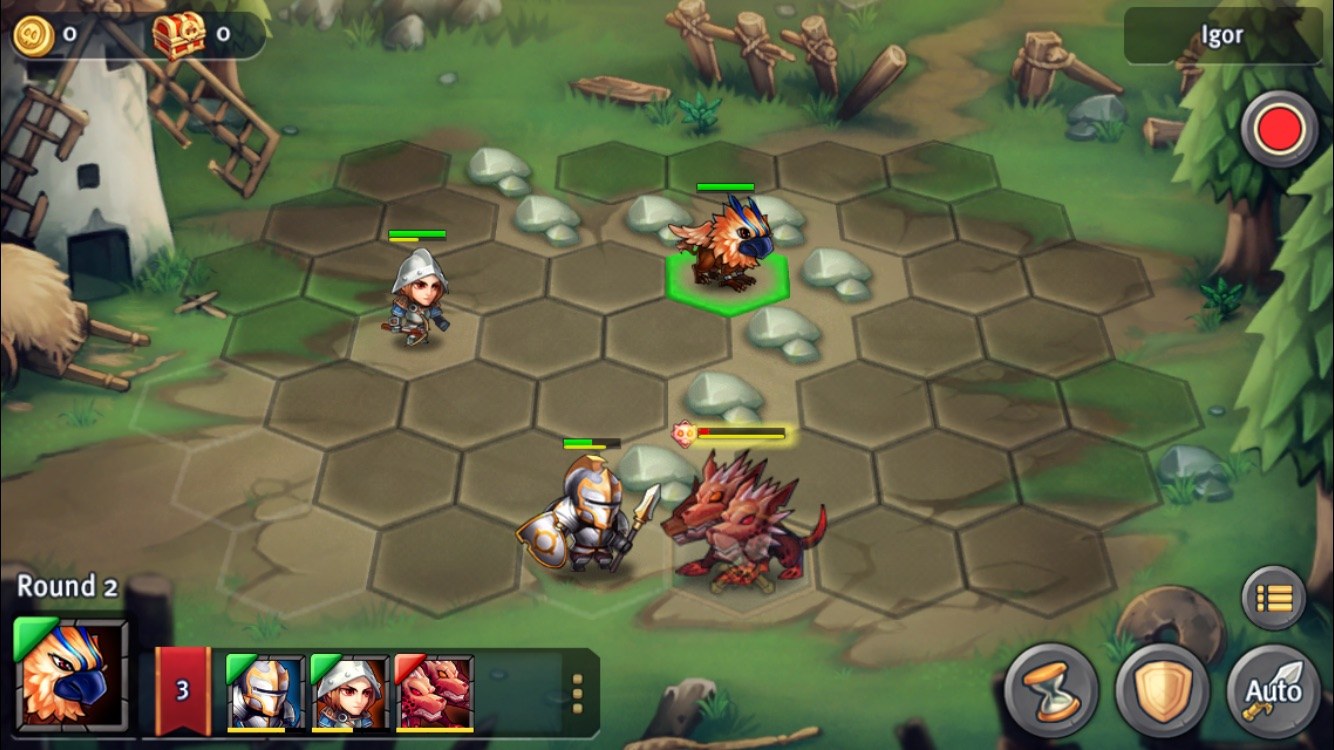 It all works fairly well, though with those difficulty spikes I mentioned sometimes winning can feel more like a matter of luck instead of actual skill. My only real problem with the strategy elements is how little information is available for the different enemies – specifically how difficult it can be to tell when a character is a ranged or melee fighter. Sometimes it’s a simple matter of looking for a ranged weapon or a magical staff, but when a bunch of enemies you’ve never seen before are all grouped together it can be a real challenge to make out those kinds of details. Being able to tap and hold on an enemy’s portrait where it shows turn order kind of helps, a little, maybe, but it only shows how far they can move. As you can imagine, this makes planning rather difficult when you’re up against a bunch of new characters. Not being able to see enemy placement on the map before starting a level doesn’t help much, either. It makes figuring out optimal troop placement a bit trial-and-error. [NOTE: it’s been brought to my attention that it is actually possible to see enemy formations before a battle by tapping on the “<<” arrow on the battle prep screen, which reveals the full map]

I have to admit, I was pleasantly surprised by Heroes Tactics: Mythventures. It wasn’t really what I was expecting, but in this case, that’s definitely a good thing.