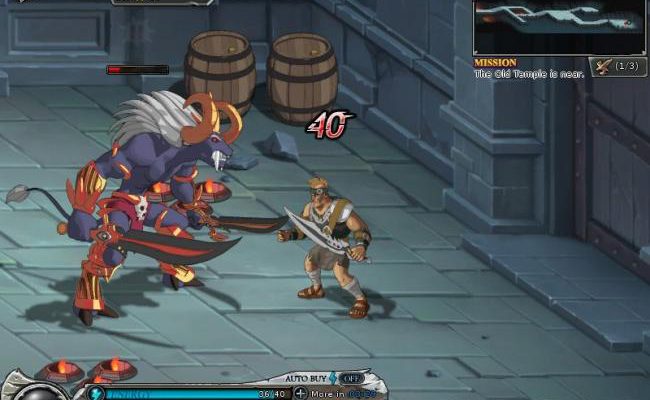 Considering they’re the ones with the immortality and all the fancy powers, it’s pretty sad how often the gods need the help of mortals to get things done. They’re at it again in Heroes of the Pantheon by StudioEX, asking you to battle your way through this freemium Facebook action game to prove yourself as a hero and help defeat the Titans. Fine, Zeus… let me go get my sword.

A choice between two character classes is the big decision that awaits when playing Heroes of the Pantheon for the first time. The male Centurion is your basic strong and silent time, using a sword and straightforward attacks to bash his way through enemies. In contrast, the female Sicaria has more subtle tricks at her disposal as an assassin and sorceress. You have to pick just one to start, though the other class can be unlocked later to experience the game two different ways. 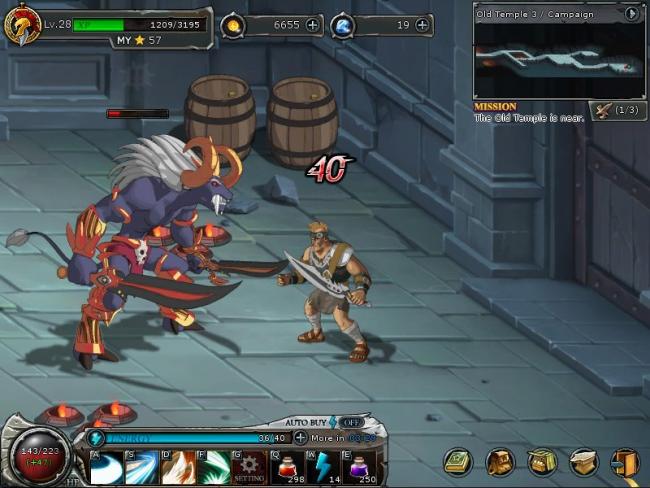 The controls are simple enough to learn quickly. The arrow keys move you around, and your basic attack is performed with the ‘A’ key. You’ll learn special attacks that are mapped to the keys to the right of the ‘A’ (in QWERTY-land, anyway), and the ‘Q,’ ‘W’ and ‘E’ keys can be used to quickly access consumables like health and energy potions.

Speaking of energy, the game uses it in an interesting way: It refills over time like in many social games, but it’s the reservoir for powering your special attacks. So you can keep on playing when it’s depleted, albeit without your most powerful weapons. At least you have the choice.

Your primary adventures come in Campaign mode, where you’ll try to earn three stars by finding three magic symbols hidden inside gold statues. The levels are fairly linear with the occasional branching path, and those sneaky Titans have some of the statues hidden behind bushes. Enemies like wild boars, goblins and centaurs try to stop you, and there’s either a boss or a large group of monsters at the end of each stage. Defeated foes drop coins, experience points and collectible items, all of which can also be found by smashing barrels and opening chests along the way.

Heroes of the Pantheon does a nice job working within its limits. Even though the animation is fairly basic, there are still things like environmental objects that can be used to attack groups of enemies. You’ll encounter the occasional puzzle as well, though you shouldn’t need to strain too many brain cells to figure them out. There are simple tasks that carry over from stage to stage on the left side of the screen (like collecting a certain number of harpy wings) that grant additional bonuses when completed.

The game has some other elements borrowed from RPGs that don’t work as smoothly. New weapons and armor can be crafted using materials you find in battle, which is fine, except that said materials are pretty rare. That means you’ll either be replaying some levels or spending coins or Gems (the premium currency) to open Pandora’s Box. Traditionally that’s a bad idea, but this box lets you spin for handy items. Regardless, it’s hard to shake the feeling that the game wants you to buy more Gems (for real money, of course). 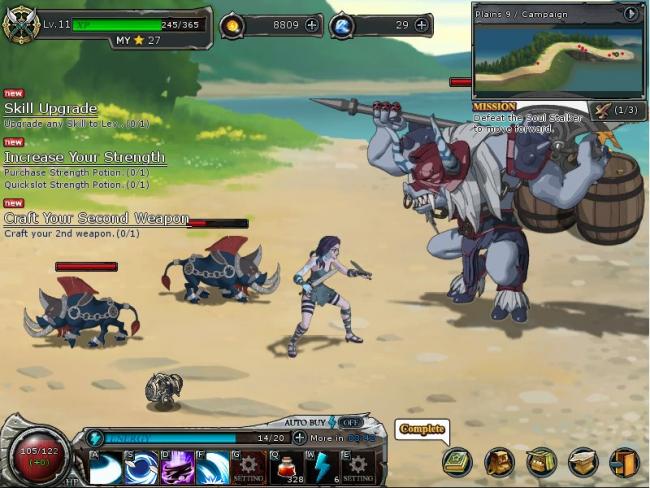 It also pretty much forces you into the social side, requiring you to either invite five friends to play or pay Gems to open up each successive Campaign map. That’s a little more of a heavy-handed approach than we’d like to see, but there’s a real benefit to having friends sign up since you can compete with them in Challenge mode or team with them to take on the Multiplayer and Boss modes. There’s a very basic chat feature if you’d like to brave the inevitable language barriers that await you and try to make some new in-game buddies.

Visually, Heroes of the Pantheon falls into the solid but not spectacular category. The multi-layered background art gives a pseudo-3D feel to what is essentially a 2D game, and everything feels fluid enough. A lack of variety in crafted items means that every character looks almost exactly the same at any given level, though, so it often looks like an army of clones is joining forces to battle the Titans. And the graphics must be more demanding than they first appear, because the load times for each level can be fairly long at times.

In terms of bailing out the gods, Heroes of the Pantheon falls somewhere in-between Wrath of the Titans and the God of War series on the enjoyment scale (and hopefully it’s obvious which end is which). It’s a fun enough way to fulfill your monster-slaying quota, especially with friends, but it’s probably not going to inspire any myths of its own in the ages to come.