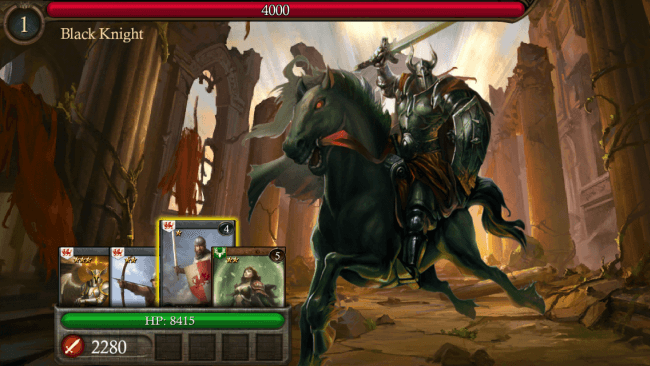 A beautiful, albeit rather dull, adventure

Kabam’s latest free-to-play venture is both an amalgamation and distillation of a lot of other iOS collectible card games. Heroes of Camelot has the looks. It has the gameplay. Perhaps most importantly, it has the cards. However, while it seems like the perfect recipe for a great CCG on paper, the results are surprisingly uninteresting.

The three key elements to Heroes of Camelot are the cards, the quests, and the battles. The cards can be placed into teams of four, with a maximum of three teams available for the Party once players hit level 10. Duplicates can be combined to evolve into more powerful and impressive-looking forms, and unwanted cards can be fused with favorites to level them up and increase their stats.

The quests are a simple matter of tapping the screen to progress, but can yield experience, gold, and extra cards in addition to opening up even more areas to quest in with even greater rewards (and challenges). The battles are hands-off affairs with the player’s Party having it out with their opponent’s automatically; the results determined by skills being activated on their own and overall team prowess. It’s a simple setup, but it’s perfectly functional.

The illustrations in Heroes of Camelot are quite nice, and it’s usually pretty easy to tell at a glance whether a card belongs to the Camelot or Druid faction thanks to the diverse character design. There’s a nice element of strategy when it comes to setting up the Party too, by way of special combinations that can be unlocked when specific cards are grouped together in the same team. However I think my personal favorite element of the gameplay is the inclusion of a small treasure trove of rewards that can be earned by collecting all of the cards available in a specific set of quests. It’s the completionist in me; I just love that kind of stuff.

However, as silly as it may sound, I found the interface to be a huge turnoff. I’ve played a fair number of similar titles over the years, and not having a way to immediately jump back to the main screen or access other menus from within the various other menus seems like a rather ridiculous oversight. Perhaps I’m being too picky, but I’m not really a fan of having to tap Back multiple times (and wait for server connections) while I’m in a quest simply so that I can collect a reward from the Treasury or fiddle with some cards. It’s kind of Interface 101 at this point, honestly.

Although as irritating as the questionable menu navigation can be, it doesn’t make much of a difference since the game itself is so unremarkable. Oh sure it looks nice, but aside from the basic thrill of collecting and upgrading cards, which can also be found in tons of other games these days, there’s absolutely nothing about it that’s kept me entertained. It’s just a dull game, really.

Heroes of Camelot is a well put together and inoffensive collectible card game with some beautiful illustrations and not much else. It’s certainly fine for genre fans looking for a new fix or newcomers that are curious to know what all the fuss is about, but it doesn’t stay entertaining for very long.