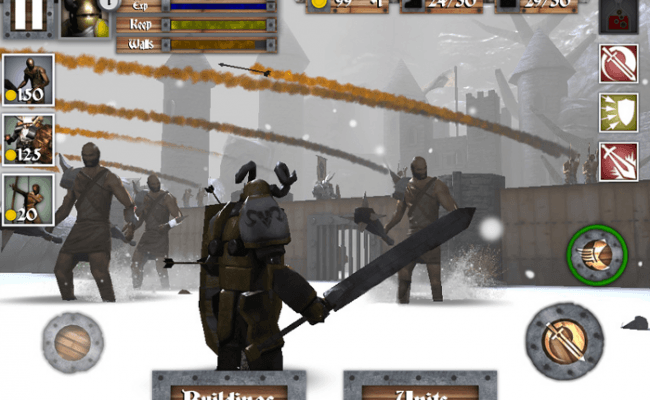 Heroes and Castles has a lot going for it, but it needs a little more time in knight school.

Wherever there is a castle, a hero is never far behind. And wherever there’s a hero, there are monsters, dragons, skeletons, and generic bad guys. Heroes and Castles for iOS illustrates that heroes need to be brave and hardy, but they also need to strategize, manage funds, and problem solve on the fly. In other words, heroes value versatility above all else. Heroes and Castles strives to do many things, and its intentions are noble—but like so many storybook protagonists, it’s also a bit rough around the edges.

Heroes and Castles is a tower defense/action hybrid that takes place in a kingdom under siege. Skeletons and monsters are pouring on your liege’s keep in a boney, slimy stream, and as the head of His Majesty’s defenses, you need to do something about it. That means shoring up the keep’s defenses with foot soldiers and archers, but it also means getting off your big strategist butt and charging onto the battlefield.

This interactivity gives Heroes and Castles some distinction in a very crowded genre. Better still, you can choose the kind of warrior you want to be. The hardy knight can take a lot of abuse, and swings a mean sword. The paladin can buff troops. And the dwarf attacks from a distance with his trusty cannon.

Regardless of whom you choose, your sole efforts won’t win the day. Heroes and Castles requires that you build up an army, as well as your defenses. It’s best to start off each siege by building a gold mine, which gradually feeds money into your coffers as the enemy lines advance on you. Then, as sufficient funds build up, you can buy foot soldiers, archers, pikemen, and other peons who will fight for you while you oversee the construction of stronger castle walls and towers. You earn skill points and crystals for your victory, which can go back into improving your strength, defense, and your soldiers’ power.

Don’t expect to kick back with a pitcher of sangria, though. Heroes and Castles is a difficult game—overwhelming at times. Monsters are in plentiful supply, and they’ll go straight for your castle walls with a mind to knock them down. You need to get out there and assist your men in physical battle, but you need to know when to retreat and heal up, because it turns out that skeletons know how to swing a blade with gusto. 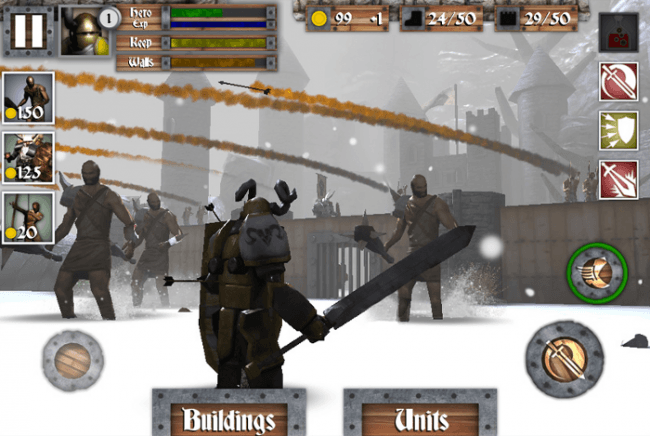 Heroes and Castles is challenging and ambitious. The graphics are admittedly unexciting, but the music is good and there are plenty of voice clips (which you can turn off whenever you get tired of hearing your peons declare their loyalty to the king shortly before getting iced). Unfortunately, the controls make the game much more frustrating than it needs to be. Response time is slow and chaotic regardless of whether you use the fixed or floating joystick. It takes more time than it should to line yourself up and whack an enemy, and your warrior has no sense of weight. It’s bad news on the battlefield, given that every second counts.

Heroes and Castles isn’t visually stunning, and its controls might cost you more than one battle, but it’s not a bad package when it’s taken as a whole. Glory to the king and his butterfingered champions.