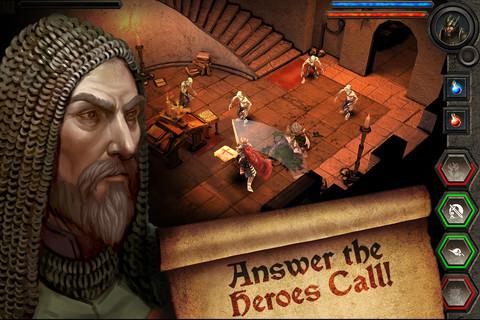 There was a time, not long ago, before the server woes came. In that magical era, the Diablo games were everyone’s favorite dungeon crawls. Since the series has yet to make its way to mobile, the minds at Defiant Development have created what they hope is the next best thing with Heroes Call, an action RPG for iOS devices that does a pretty mean Diablo impression without feeling like a mere clone.

As either a Blood Knight or a Plague Wizard, your job in Heroes Call is to take up arms and either slash or blast your way through the enemies plaguing the town of Brineside. Conveniently, much of the surrounding land is made up of dungeons. It’s a one-man job to clear them out, and yes, it can be done offline (though some features between quests do require an internet connection).

A tap or a drag gets your character moving in the right direction, and basic attacks are performed by well-timed single taps on enemies. Getting the timing correct on multiple swings allows for combo attacks that do extra damage. Other powers, spells and abilities can be activated via their own specific gestures or by using buttons on the right side of the screen.

Any game inspired by Diablo would be a drag without loot, and there’s an impressive amount to be had here. Weapons and armor come in many flavors thanks to different combinations of bonuses and extra effects, and they follow a pretty familiar color-coded RPG system of rarity. Some also have initially unseen abilities that can be discovered using Identification Scrolls or by taking them to an Appraiser in town.

Other places of interest in Brineside include the Tavern, where you can do connect socially, linking to Facebook and getting goodies for inviting your friends to play. The Blacksmith has gear for sale and will buy back anything you find that isn’t for your class – which happens often.

There aren’t experience points to worry about, as your character levels up every time a quest or series of quests is completed. He’ll get new abilities and unlock more powerful gear when he does, a must since all offensive and defensive stats come from equipment. Who needs pesky attributes anyway?

The Adventurer’s Guild in Brineside assigns you to the next available quest, but there’s a catch: you have to wait an increasing amount of time before taking on your next mission. That wait time can be sped along by using Gems, the game’s premium currency, a necessary evil in a freemium game. This is one aspect of Heroes Call that will feel greedy to some and annoying to almost all. It’s especially frustrating because the witty banter between NPCs only takes place at the beginning of each quest, and you’re basically stuck with the option to cool your heels or spend some cash to get to the next batch. 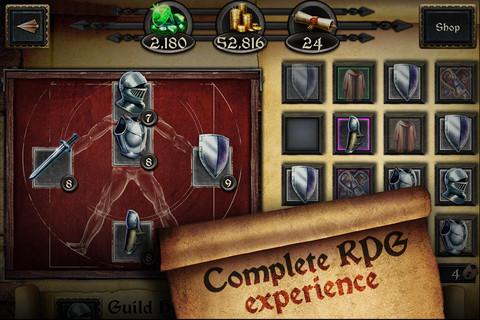 A few other things pop up that work the nerves just a little. The graphics are gorgeous, spiffed out for the new iPad’s retina display, but there’s so much going on at times that it’s easy to miss gold or item bags amidst all of the dungeon textures. Your initial class choice also ends up a lot more important than it might seem, as the one not taken must be unlocked with Gems. Two more classes, the Combat Alchemist and Shadow Assassin, are still down the road.

It would be nice to review every game in a vacuum, but sometimes it’s hard to ignore the obvious influences. Heroes Call isn’t quite in the same class as Diablo, yet it manages to capture much of the same spirit in a freemium mobile package. That’s a pretty impressive feat, and it should be enough to keep you hacking and slashing for a while.