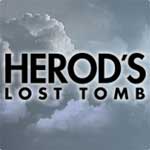 Imagine you’re visiting your Aunt, an archaeologist. "Look for a bottle," she says. You scratch through dirt with a paintbrush, uncovering something. "This?" "No. Keep looking." You try again. And again. Everything is dustry gray or tan and looks similar. At the fifth nearly identical ceramic object, she says, "That’s it. Now look for a pot." That’s basically the experience you’ll have with the new hidden object game Herod’s Lost Tomb.

Advertising breathtaking graphics from the National Geographic Channel, the game starts out in a promising way, with a well-drawn screen offering a choice of two interesting archaeologist characters.  You choose one, and begin a journey to discover Herod’s secret tomb. Was he buried in Judaea? In Rome? Your task is to visit 16 important archaeological sites and discover clues to his true burial place.

And visit them you will. Over and over and over again. There are 20 chapters in the game, and in each chapter you will visit from 3 to 9 of the 16 sites. Each time you go back you will be given a list of 9 objects to find at each site, anything from a pearl to a safety pin. The objects will always be in the same place, and many are reused from location to location.  Not only will you revisit the same sites, you may be asked to find exactly the same item in the same site for the second or even third time.

It’s not quite as easy as it sounds, though. Sure, a pearl is a pearl. But what’s an “urn”? It turns out that naming inconsistency from chapter to chapter changes what an “urn” is. There may be 5 similar looking objects, any one of which appears to be equally correct. Far more frustrating is the fact that an item called a “bottle” or an “iron” in one scene will not be accepted for the same word in another.  This is sometimes even true for the same object in the same location.

The game can still be solved, though, because you can click on any item in the list and see its silhouette on the side. Sometimes this is the only way to tell just which knife or jar will satisfy the clue. There is also a sophisticated hint system that lets you specify exactly which item you’re looking up (helpful when the list includes “urn,” “flower pot,” and “vase” as three separate entries).

Players have a choice between playing in timed or relaxed mode. With no penalty for extra clicks, most people should be able to complete the game in timed mode without difficulty.

Although the story is meant to be compelling, it comes across more like a 5th grade science video than the kind of engaging storytelling the National Geographic Channel has become famous for. Video cut scenes are OK, but mostly inspire one to go look up the show the game was based on, not move forward in the game itself.  The two different characters appear to have exactly the same gameplay and comentary, so there’s little replay value in starting again with the other one.

Over the course of the game you earn five different power-up tools, like a sonar scanner and night goggles, but everything except the paintbrush works in an identical fashion. You just scan across the scene until you see the item you’re looking for. You’re given no choice about which to use or when. Moreover, using them often makes no sense, like having to use an X ray scanner to see an object that’s inside an open wicker basket.

Five mini-games add a bit of variety, but most are simple jigsaw or rotation puzzles. There is one clever pipes problem that does suit the historical themes of the game.

The graphics are impressive for realism, but they’re also all too realistically dusty, dirty, and grey. Even the birds and butterflies are in the same neutrals palette. Sound effects are limited to water, wind, birds, or minimal background music.

There was a great idea for a game here. But limited objects and locations and inconsistency in naming leaves players with gameplay that feels a lot more like homework than entertainment.