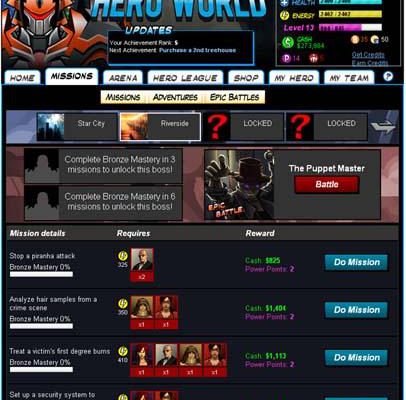 Hero World is a game that should be more fun. It’s a text RPG (think Mafia Wars) using a superhero theme, where you create your own superhero and then go out adventuring. In theory, you can grow your superhero from a dull newbie into a mighty powerhouse by completing missions, forming a superteam with your friends, and battling supervillains. Superheroes should be a good fit for the text RPG format, but Hero World squanders a lot of its potential.

The overarching problem with Hero World is that it’s very difficult to get started, which makes it very hard to play with your friends. Most social games that feature customizable avatars let you start by designing one. Not so with Hero World, where you need to level up once or spend real money. All default avatars are male, too, which this writer found very annoying.

Once you’ve got a hero with somewhat customized appearance, you still have to deal with the fact that all starting heroes have basically the same powers. You can learn more powers later by spending power points to absorb them, but that can mean hours of play using the default Punch and Super Punch abilities before you get to throw lightning bolts or fireballs or whatever you actually want your hero to use. Mechanically powers don’t seem to be all that different in the early game, which is even more discouraging. 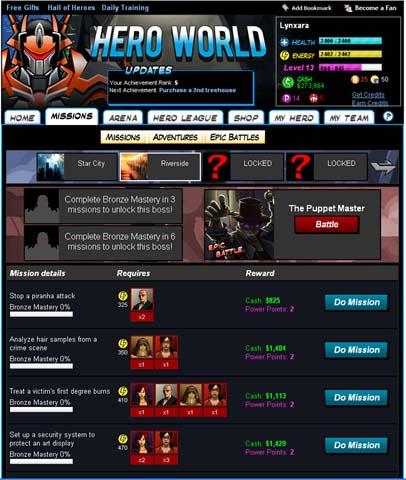 Hero World offers a lot more content than most MMOs at this point in their lifecycle, but there’s a real cost paid for that in player confusion. The game’s menus are cluttered and unclear, forcing a lot of trial-and-error clicking about to figure out that the Hero League is the game’s cash item shop or how to customize your hero’s base (essentially, the environment your hero hangs out in).

Once you get into actually playing Hero World, it’s got a lot of the fundamentals of a great text RPG in place. There’s a lot of ways to cooperate with friends, both to build up your character’s stats and to advance in your game. You can engage with the standard missions you click to master and minor bad guys you can get into brief battles with. You can team up with friends and spend days battling Epic Bosses, enemies with huge HP bars and equally huge amounts of loot to drop. There’s also an Adventure mode that lets you get extra items by exploring various points on a map.

Hero World is a game that has fallen into serious decline, dropping from 5.1 million to 2.6 million monthly active users over the course of the last month. Hero World needs a player-friendly overhaul with more hero customization up front if the game wants to survive. Everything truly fun in the game involves getting lots of people to play with you, but good luck convincing your friends to play a superhero game with lousy character customization with you.