Home / Reviews / Hero of Many Review

Hero of Many Review 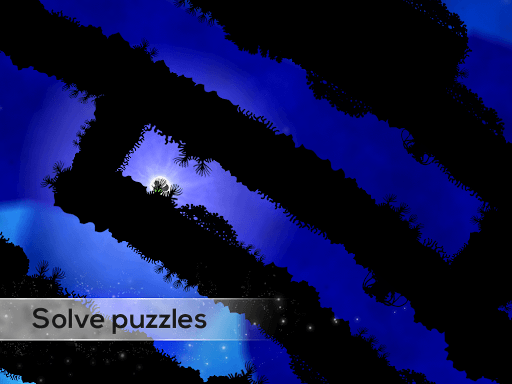 You should take the plunge with Hero of Many.

Some of the best video game stories are those that involve no words at all. Hero of Many doesn’t throw a single line of dialogue at you, yet you’ll become engrossed in this tale of a little water orb and his army of water-beings. There’s mystery, intrigue, and plenty of physics-based puzzles to overcome along the way.

Slowly but surely, you move the orb through 26 water-based levels, gathering your swarm together one by one and taking the black swarm head-on. The further you move into the game, the larger your swarm will become, and the more intense the battles.

Your swarm is the highlight of the game, swamping around your orb and clinging for dear life. You are their master, and they’ll follow you to their deaths if necessary – all in aid of keeping you alive and well. You’re not told exactly what is so special about you, or why the swarm follows you so closely, but it’s clear that you are important in the eyes of these water-beings.

The world of Hero of Many is dark and moody, drowning in a sea of silhouette. It’s regularly gorgeous, and there’s a great atmosphere throughout, thanks to the combination of black on color, and the accompanying dynamic soundtrack. You’re going to want to slap on a pair of headphones for this one.

Building an army is easy, thanks to the simple yet elegant controls. You touch to direct the orb, and the further away you position your finger, the faster the orb will move to meet you. Your army will also glide along with the orb, and you can direct them manually by flicking your finger in a particular direction. 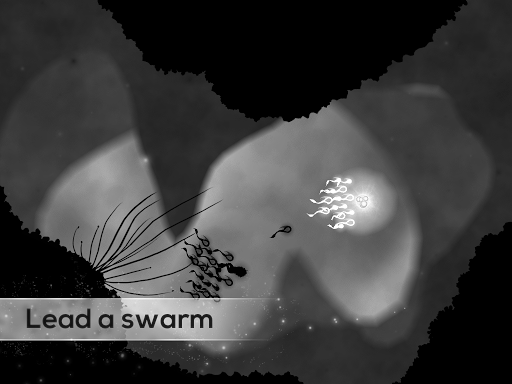 Though a good portion of Hero of Many involves simply exploring each nook and cranny, there are physics-based puzzles along the way, which usually involve smashing into a rock to clear the path, or nudging a rock into position. I use the term “puzzle” loosely, as it’s all extremely simple and you’ll never get stuck, but it still does a good job of breaking up all the darting around.

What’s amazing about this game is that you’re never explicitly told what is going on, but rather, you’re left to tell the story yourself. There are small cutscenes every now and again, but no text or symbols are used to describe the scenes at all. It’s pretty insane that the struggle of two warring factions can be described so thoroughly through the simple use of black and white blobs. 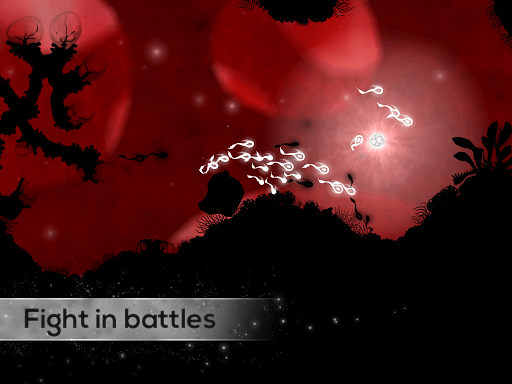 Hero of Many could be more challenging. As previously mentioned, the puzzles aren’t exactly taxing – plus, the battles are extremely hands-off. You can’t control your army, so you sort of sit back and watch them attack. It’s usually a case of “whoever has the biggest army wins,” meaning there’s really not a lot to it. But Hero of Many is still a joyous, yet moody experience that is well worth diving into. This is atmosphere in a mobile game done so very right.

Alone in the Park Review