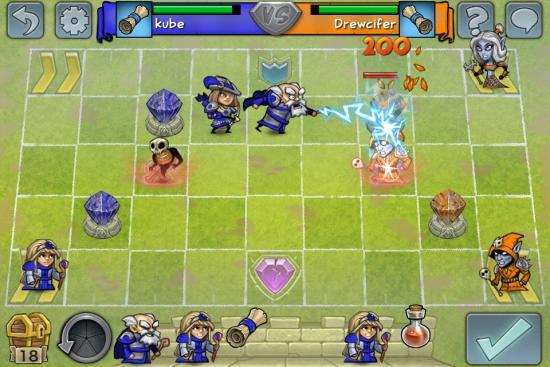 Hero Academy feels like the start of something special

Contrary to popular opinion, heroes aren’t born. They’re trained. That’s something we normally don’t get to see, as they’re usually a bunch of medieval badasses by the time we meet them. That said, Robot Entertainment’s new iPhone game Hero Academy shows just how much fun the training process can be.

Presumably, Hero Academy takes place in a world where fantasy heroes are trained via simulation battles, sort of like how Battle School worked in Ender’s Game or “Save The Citizen” did in Sky High. Unfortunately there’s no real story here, so any explanation you can come up with will work.

Gameplay consists of turn-based tactical battles. You can play against either a friend (via Game Center or Facebook) or a random stranger. Each fight takes place on a grid map that contains two crystals for each of you to defend. Each player has five actions per turn, which can be used to summon new heroes, cast spells, or provide upgrades to their current forces. Additionally, each map also contains tiles that bestow bonuses (like making an enemy’s crystals more vulnerable or letting your heroes do extra damage) when they’re occupied by a character.

During each battle, you have a selection of heroes, upgrades, and spells to choose from via a tray at the bottom of the screen. After each turn, your supply is randomly re-stocked (provided you’ve used up anything), but you only have a limited supply of items you can receive. This is actually a nice little feature, as it adds an element of luck into the overall play experience.

Characters have a limited amount of movement and attack range, but you can move them as many times as you have action point. Each hero type has different abilities, with the teams made up of slightly different units, but they all fall under the general categories of warrior, wizard, ranger, healer, and ninja.

The great thing about matches is that they always play out differently depending on each player’s tactics. Do you want to play things safe and build up an army that you can protect your crystals? Or will you move in that lone archer you’ve powered up and have her take out the healer who’s been making your life difficult by resurrecting her comrades? Or, alternately, is it worth the gamble to make an all-out blitz against your opponent (so long as he/she doesn’t have any tricks up their sleeve to hammer you back).

Despite the fact that Hero Academy is plenty of fun, it’s still got some things holding it back from being great. The main issue with the game is that it doesn’t contain a single-player mode. That’s problematic, especially if you’d like to play a quick battle when you’ve suddenly got a few minutes to kill. Instead, you can only play with other people online. So, if you’re randomly paired with someone in a vastly different time zone, games that would hopefully take only a few minutes can last several days. 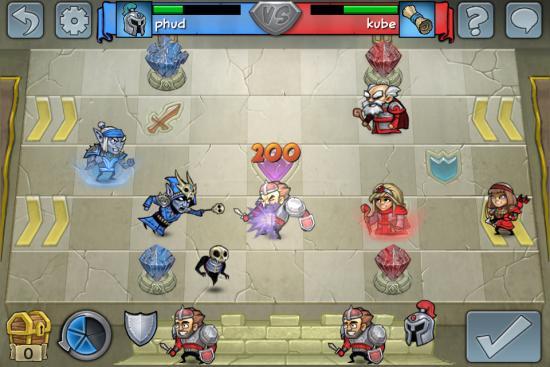 Also, there’s no real tutorial. You can flip through a couple of instructional screens, which admittedly do a decent job at showing you the basics of gameplay, but there’s no hands-on experience for you to familiarize yourself with things. As a result, the first game or two may feature more experimentation than actual strategy.

Finally, while the game’s visuals are amazing, the soundtrack is a bit jarring. The music is sort of like fast-paced jungle music, and it’s just bizarre to listen to; it just doesn’t fit with the turn-based gameplay.

Hero Academy feels like the start of something special that’s only half-finished right now. The gameplay is great, as are the graphics, but it still needs some additional content before it’s something to recommend to all gamers (like a single-player campaign and a real training mode). Still, if you’re patient and can get past these quirks, you’re in for a great strategy experience.