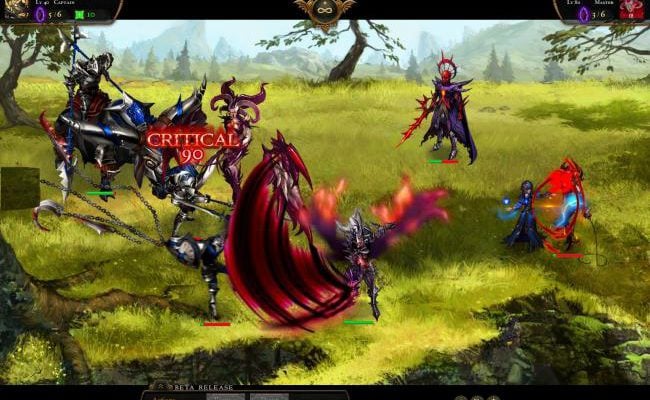 Strategy and card collecting meet in Heralds of Chaos

An hour into my time with Heralds of Chaos, I found myself wondering why it’s so hard to find something like this among all the other social trading card games on Facebook. Its gameplay may reveal a greater focus on polish than innovation, but I’ve nevertheless experienced few other social trading card games that do such a good job at hammering out an entertaining narrative from a game about cards. Other card games have seasoned their gameplay with stories, of course, but Heralds of Chaos does it so well that it’s enough to trump some of its shortcomings.

With such an introduction, I may be setting you up to expect the Hamlet of social gaming or some such. Don’t. After all, Heralds of Chaos is full of the stuff you expect from most cheap fantasy fare–stuff like lingerie clad succubai and female wizards who wear so little that they must be daring sword-wielding thugs to get close–but it’s engaging fodder nonetheless. Even better, it gives you the choice of following the campaign through the eyes of three factions with adequately different storylines. You have your predictable blonde-locked knights of the Kingdom of Avalon, for instance, and you also have the predictably evil Hellspawn (home to the aforementioned succubi). My personal favorite, though, was the somewhat middle-of-the-road Flameborn, who run around battling puny humans and demons with a menagerie of dragons.

The story largely works because it plays out so well on the battlefield. The battles themselves take the form of memorable round-based face-offs that allow you to choose which units attack which on the other side, and there’s a noticeable inspiration from the recent Magic: The Gathering Duels games in the way that fuzzy yellow indicators shoot out from each of your units indicating which enemy units they’ll attack. It’s fun, but in the first few hours you can feel the need for more buffs; as Flameborn, for instance, the only thing I found to augment my troops early on was a simple healing spell. Early on, you might get the impression that Heralds of Chaos consists of little more than slinging different heroes at each other.

Even so, the combat itself is surprisingly engaging, filled as it is with enough animations to make it feel as though you’re watching a real battle unfold instead of clicking a button and waiting for the results of a random number generator. It also encourages careful planning, for you could find yourself in a tight spot if you weren’t wise enough to move several units at once as you explore. 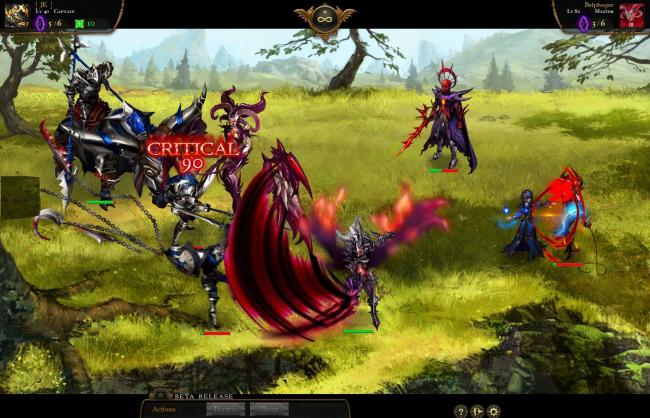 Therein lies the rest of Heralds of Chaos‘s appeal. It’s not just a game about cards; it also uses a gridded map interface vaguely reminiscent of Heroes of Might & Magic to enact key moments in the plot. As a Flameborn, for instance, my first task was to cross the entire map, spawning new allies each turn, until I reached a mysterious sorceress and took her all the way back to my camp. Along the way, I had to capture six objectives by landing on them in order to win the stage, and I engaged in several battles with both weak and powerful foes. I was barely level 2, and already Heralds of Chaos was tossing a challenge my way. I liked it, and an additional “cataclysm” effect that causes pieces of the grid to fall off with only a round of warning only added to the tension.

The best part of all this is that Heralds of Chaos actually feels like a game when you jump into the PvP multiplayer component. This isn’t a mere case of hoping you have better stats than your opponent; instead, Heralds of Chaos‘s matches demand skillful maneuvering in order to both defeat and outfit your opponents. All of this makes for an uncommonly entertaining strategy and card collecting experience, and we hope its release only heralds the arrival of greater things to come.

Injustice: Gods Among Us Review