Home / Reviews / Her Story Review: Devil in the Details 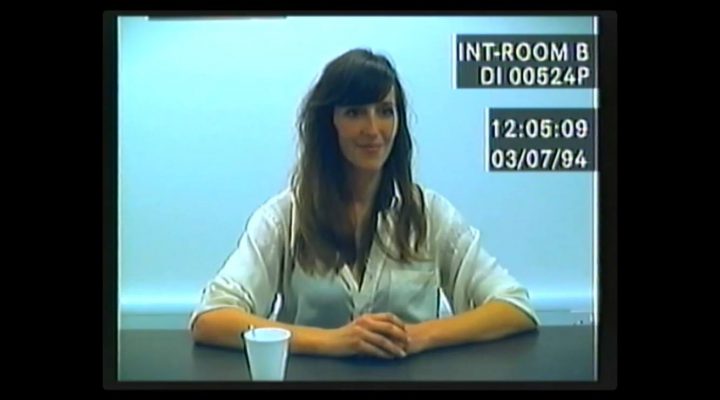 Game progress is motivating and satisfying

No hints if you get stuck

The one-shot perspective can get tedious

It’s a unique challenge writing about a game when almost any detail would be a spoiler, but that’s just how tight Her Story is as a narrative-driven game. Every notable detail (and some less notable ones) in this interactive murder mystery is useful to a player as they move through the storyline. So without telling you what to look for or how to do it, I’ll share the context of the game so you know what you’re getting into before you drop a well-spent $4.99 to play. I assure you, solving the mystery of Her Story is indeed a worthy pursuit. The acting is flawless, the script is riveting, the mechanics are motivating, and the story is uniquely disturbing.

Searching through a police database of video interviews functions as the gameplay of Her Story. I began the game looking at that database open on the desktop of a 90’s-era PC. This conceit is so effective because it immediately evokes the full motion video games of its time. However, unlike a 90’s CD-ROM, on my iPhone 6 the windows opened and closed quickly, video was smooth, and load times weren’t noticeable. In other words, the mechanics of playing were actually a pleasant experience as FMV games go, and the mock-retro medium had none of the real-retro limitations. 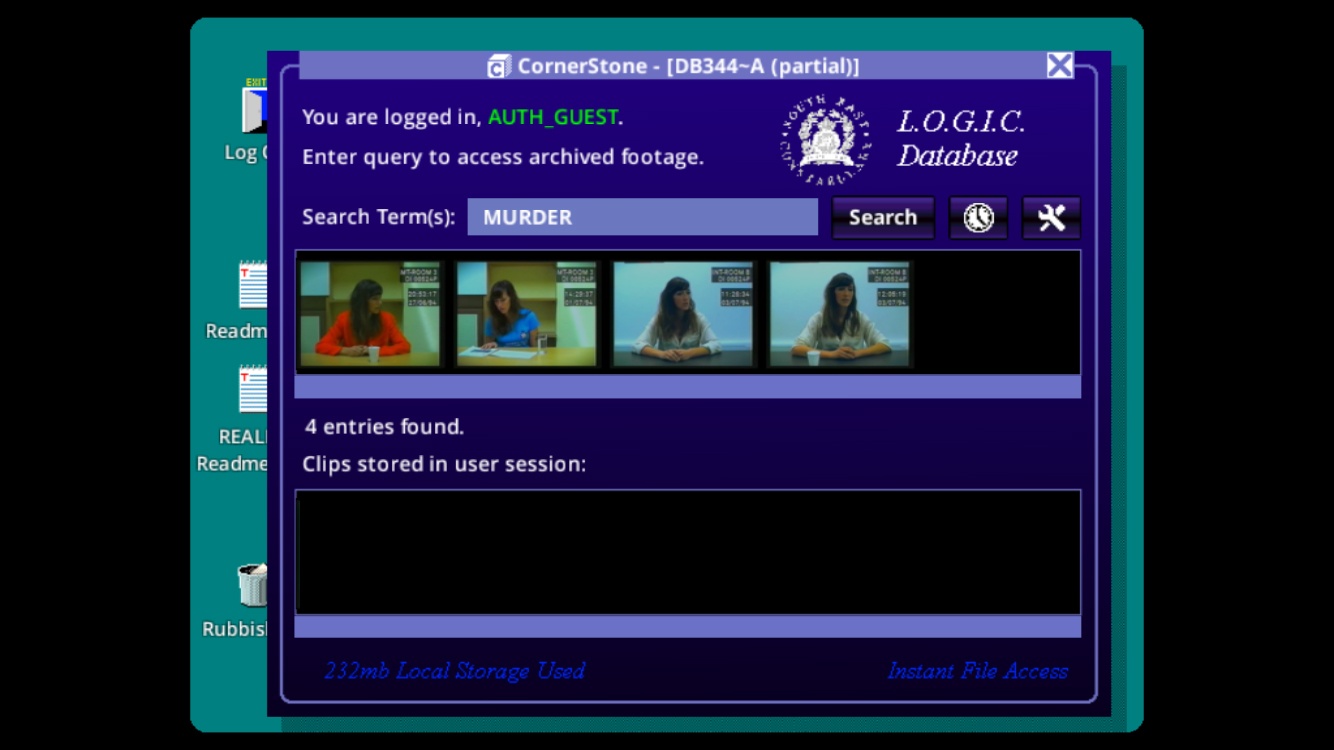 As soon as the database is open, the search bar query shows “MURDER” already input for you and four video clips are available to watch. As you watch these first clips, you’re presented with a woman answering questions to varying degrees of interrogation regarding her missing husband. The timestamps are all different, but the year is 1994 for all of the clips.

The transcript of each video clip in this database is searchable by keyword or phrase, so after watching the first four available clips, you can query the database with any word you think may be relevant to uncover more videos. Rest assured, however, almost every single video you watch provides a clue in the form of a keyword to search- either through something the protagonist says, does, or implies. Watch and listen carefully and everything you need to uncover more of the story is right in front of you. As videos are surfaced by keyword or phrase, viewing access is limited to only the first five files, immediately creating tension with whatever remaining videos you can’t watch just yet. But keep querying new keywords as you encounter them and more of the story will be revealed.

This is the magic of Her Story. While watching a clip, I would catch a name, location, or some other detail like an object, which I would query next. Some clips would surface that I’d already seen, but every time there was a new clip (indicated by an eyeball icon), I got a quick thrill for having done good investigative work. My query history serves as an outline of my investigation; I can see where I went off course, where I got stuck for a moment and circled back to check for something I may have missed.

Once I reached a certain point with the clips, the game “checked in” with me through an NPC message to see if I was satisfied with the results of my investigation. This guiding moment came as a relief to me because I knew I was close to “solving” the mystery. However, I wasn’t quite satisfied at the check-in point, so I continued on — doing more searches to find more new clips, trying to understand just a little more. Once I was ready, I “buzzed” my contact from the PC desktop. I was then given one more clue which, upon querying, revealed yet another disturbing detail of the storyline. The game took about two hours for me to get to this point, but that was only the beginning of my experience with the story. 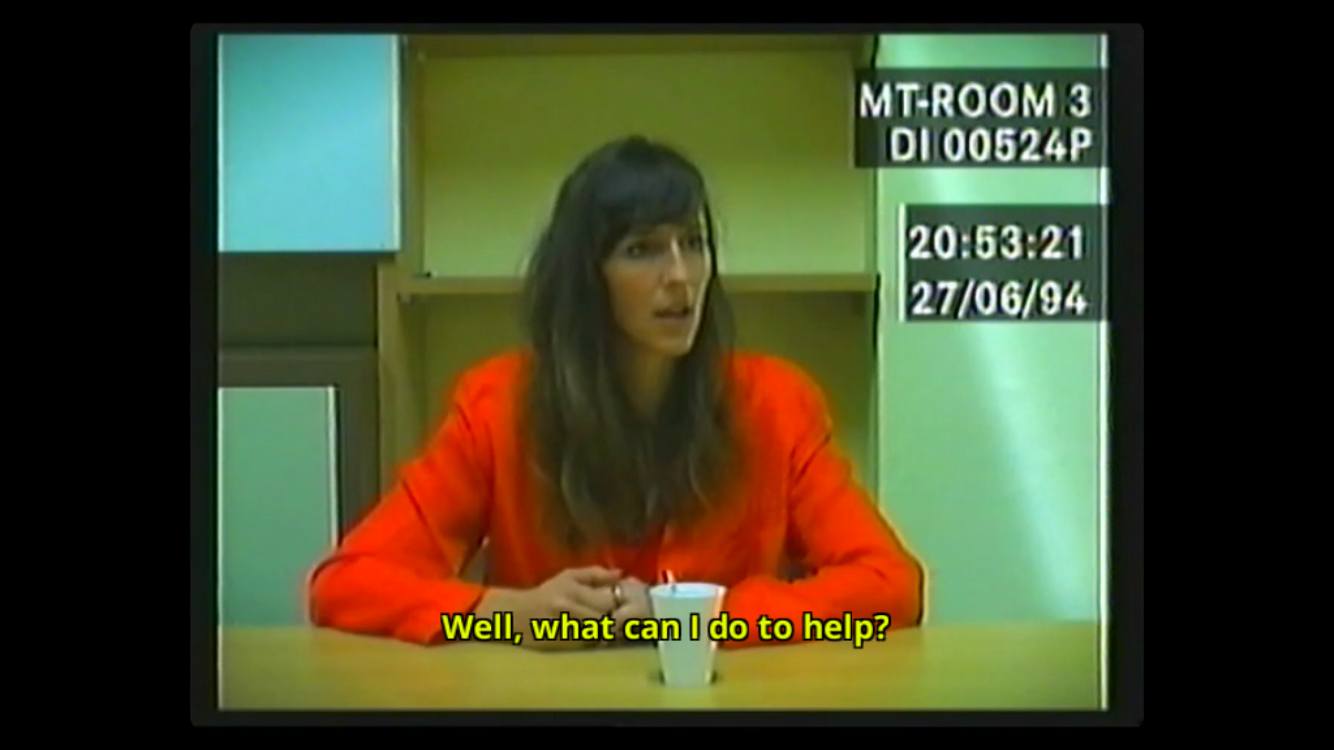 I would imagine that with any real violent crime, there are aspects that can never be understood even if a case is considered “solved.” Motives, pathologies, even confessions can remain inscrutable, baffling, or simply incomprehensible because of how far they depart from everyday normative experiences. Yet we devour these stories through crime reality television and procedural crime dramas trying to understand the nature of tragedy, revenge, sacrifice, obsession, passion, fear, anger, and so much more.

It is in this dark place that Her Story will continue to haunt me. I collected the clues, assessed the details and assembled a narrative I believe to be resolved, but I am still nagged by the desire to know more, to understand more, to connect more. Beyond solving the mystery of the game proper, Her Story continues to occupy my thoughts with the mysteries of memory, trauma, and motivation. It is a grand feat of compelling interactive storytelling that will keep you thinking long after all the clips have been uncovered and watched.