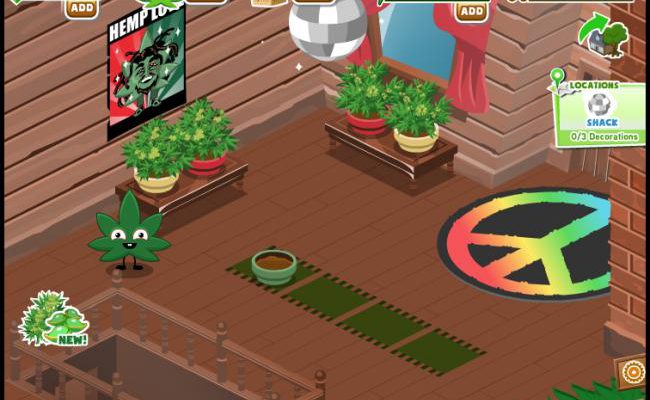 Farming social games have been around for a good while now, but the folks over at Adult Swim Games are looking to stylize the genre a bit with the rather bizarre Hemp Tycoon. Though games in which players grow marijuana have been done before, with apps like Pot Farm and Weeds Social Club, this new release focuses more on the business aspect, rather than avoiding the police. It’s also the first game in which players get to be a talking pot leaf.

Perhaps the talking leaf, along with his snarky grandfather, is meant to freak out the inevitably high users of the game (frankly, they’re a little weird even when lucid). Regardless, the two guide you through the game step-by-step, in the form of quests, teaching you all the nuances of growing and expanding a hemp empire. Along the way, the pair make a fairly amusing set of color commentary that book end the different quests. 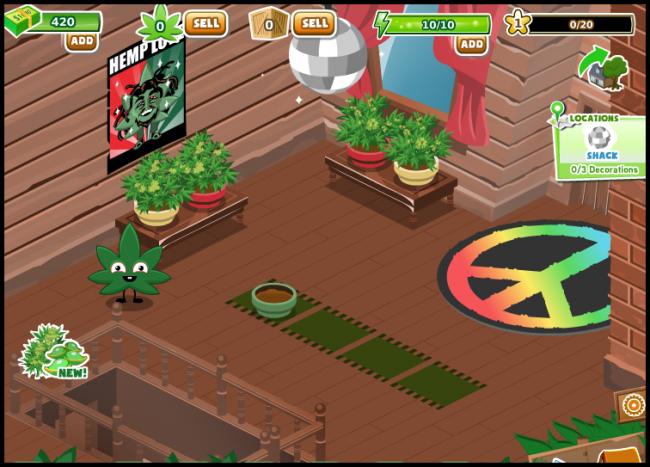 The game play will be relatively familiar if you’ve ever played any bit of FarmVille. Starting in a 70s style tree house, you simply prepare pots of soil and plant various types of hemp seeds within them. They will grow over the course of time (ranging from 15 seconds to several hours) with the ones that take longer producing more leaves and being worth more money. As they are growing, you have the opportunity to water them, which reduces time in which it takes to grow. Upon maturity, they can be harvested, but will spoil if not done so within a set amount of time. Typically, this is a significant negative for games of this nature, but it is less of a problem since even plants that take 15 seconds to grow still take several hours to rot.

Once the finished leaves are harvested and in your inventory, you could sell them. However, once you’ve reached a high enough level (and you will during the first play session), you will be able to venture out into the “Neighborhood” and start making bigger profits.

Once out in the neighborhood, it is possible to begin buying buildings that can use pot leaves to enhance profits. Unlocked at various levels, these include things like hemp milk, hemp candy, or hemp beef. When constructed, the production of these goods can begin so long as the proper type and quantity of hemp leaf is available.

Like the actual plants, all of this can be expedited through the use of premium items. For buildings, these are odd-ball machinations like mixtapes and the “Rasta-Bot” that reduce production time, and for plants, it is the standard fertilizer. All of these cost Facebook credits. That said, none of them are required to enjoy the game. They merely make things a bit faster for the less patient user. 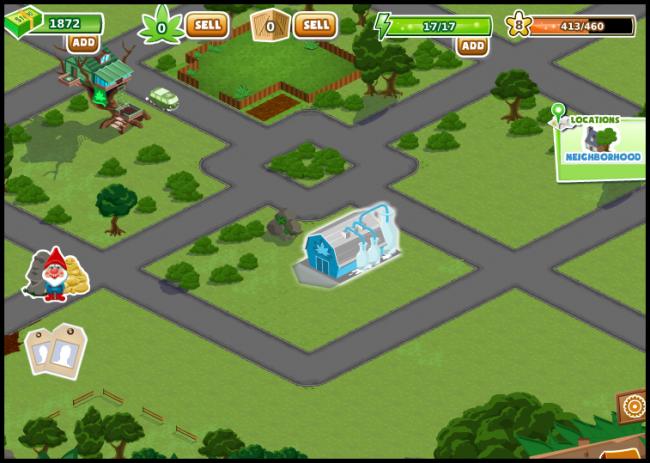 The other aspect of the game that stands out are the decorations. Though decorating a virtual space is nothing new to social games, the décor in Hemp Tycoon is far more functional than most. There are two major starting areas to decorate, including the noted tree house space as well as a backyard. In each local, different items can be placed that provide different perks. For example, placing flowers will make plants grow five percent faster. Place bones will make plants wither 50 percent slower. Others grant experience bonuses, while still others allow more hemp to be produced.

It’s worth noting Hemp Tycoon is very well presented. Though it is visually appealing, the sound design — namely the music — is what stands out most. The game comes accompanied with a great reggae-style soundtrack, and is enjoyable to listen to all by itself. On the downside, the social mechanics feel a bit drab, consisting mainly of just sending gifts and leaderboards. After inviting friends, it didn’t seem possible to even visit their virtual farms.

All that in mind, the only other complaint is that Hemp Tycoon is yet another social farming game. Well made, and hosting some interesting decorative mechanics, the game stands out as a slightly more bizarre rendition of a commonly made game design. If nothing else, the commentary from the talking pot leaves is entertaining as players begin and complete quests. Overall, if you’re looking for something significantly innovative, it isn’t here, but there are some nice and quirky improvements that moves Hemp Tycoon away from the dryer style of farming concepts.