Little to no guidance as to what to do

Hello Neighbor has a lot going on for a mobile game. It has several chapters, quirky graphics and a storyline that is surrounded by mystery. That being said, I struggle to give it any more kudos beyond the aforementioned.

Gameplay involves navigating as the smallest child in history, trying to uncover what on earth “your neighbour” has hidden in their basement. It sounds simple and straightforward, yet it all goes downhill from there.

It’s a mess. As a game that was originally made for PC, the hard work was done in terms of developing. All that was needed was a good effort with regards to porting it over to mobile. The controls don’t work, and by that, I mean in terms of practicality and reliability. The widget that controls player movement sets itself based on where you press. Brilliant right? Well, this game requires stealth and the occasional run for your life situation, therefore by having a widget that repositions itself is incredibly frustrating. There is nothing worse than being caught in a stealth horror game, especially when you’re let down by the controls. 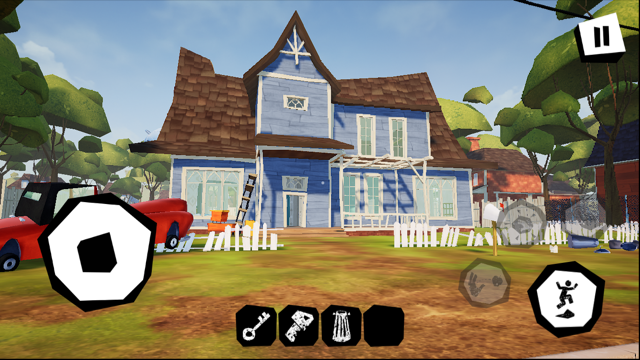 Another aspect that really lets this game down is the graphics. When games like ‘Asphalt 9: Legends’ show up on the App Store with next-generation quality graphics, you really can’t afford to cut corners. Hello Neighbor didn’t just cut a couple corners, it cut them wherever possible. The graphics are very low quality, they may look quirky from a distance, but everything is unpleasant to look at close-up. What makes this even more frustrating is the file size, a 1.2GB mobile game should be filled with lots of content and decent quality graphics but instead it falls short. 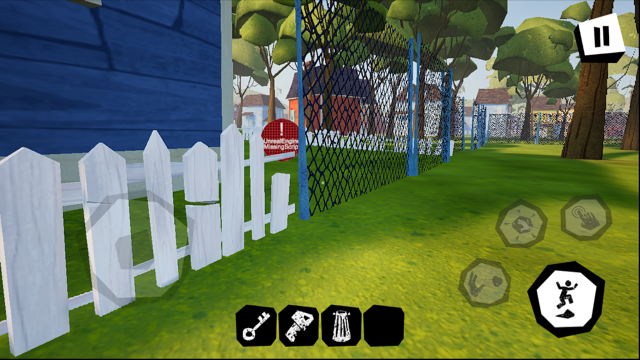 Now let us talk more about gameplay specifically. As a man who studied video games and is an avid player, I can comfortably say this game has made no effort in immersing the user in the game’s magic circle. Each game has its own reality (magic circle) where certain things are possible, for example in PUGB there are 100 individuals, lots of loot, last one standing wins. In Fortnite, there are 100 players, lots of loot, last one standing wins, and you can build your own ‘fort’ for protection, a game-changing mechanic. Although both games are a similar “battle royale” style, they have different realities where different things are possible.

Hello Neighbor drops you in the deep end with regards to what they expect you to do. There is a quick cutscene at the beginning which effectively lowers your expectations of gameplay. Then an even quicker tutorial to explain each button and the rest is up to you. There is no way on earth that if you started to play this game, you would accidentally stumble upon the right thing to do. There is no explicit or implicit instruction, ‘beyond a door is locked’ or ‘the key is upstairs’. 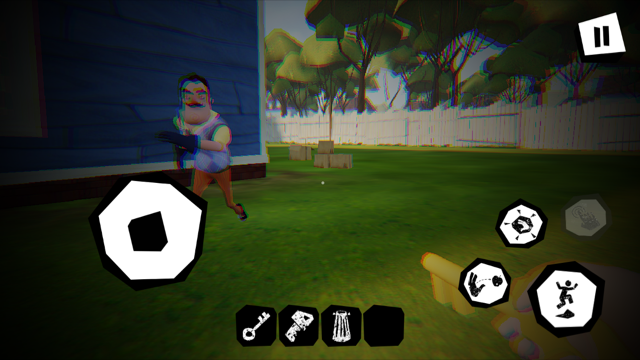 Well, maybe it’s as simple as going upstairs and retrieving the key? Of course not. In order to progress in Act 1, you must get on the roof, smash a window upstairs, flick some switches, turn on a fan, run outside, stand on a platform, break in again, steal a key and then finally unlock the basement. The stealth horror aspects come into the game later, but as of now, there is close to none. In fact, the neighbor patrolling his property at the start is a total decoy. There is nothing you can do downstairs inside his house without that red key.

This game is really unfriendly. It doesn’t do a lot in terms of setting the scene, besides a couple cutscenes after getting caught a number of times. At first, avoiding the neighbour is an exciting experience but it is quick to become novel as the NPC feels very much overpowered. Once in the basement, I can say the atmosphere is better but far from good. It’s obvious he is constructing some type of dungeon, but the NPC is far too frustrating for stealth to come into the game. 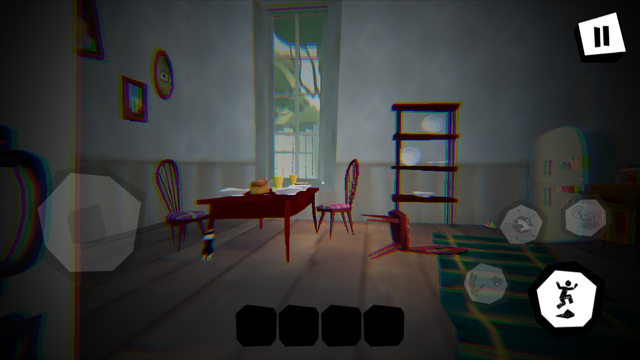 When you originally arrive in the basement you have a brief period without the neighbour intruding which allows you to explore and really appreciate what the game was trying to do. Although, as soon as the neighbour joins you it quickly becomes tedious and boring once again.

Overall, I would say give this a go, I think there is some fun to be had with this game you just need to adapt to bad controls and look up what to do. I personally would not invest in this game. Stealth horror games aren’t for everyone and I think there are many better attempts out there on mobile.

The first act is free to play on the App Store so why not give it try and tell us what you think in the comments below.