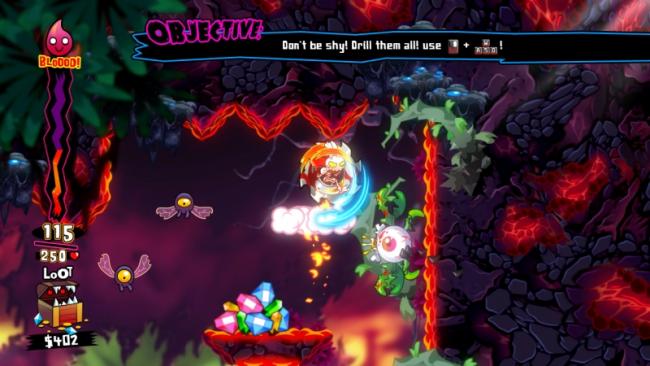 Trix are for kids; but bazookas, machine guns, grenades, and giant razor-sharp wheels are for mother effin’ rabbits.

Let’s get one thing straight: I’m not anti-rabbit.  I simply don’t agree with Proposition 415’s plan to legalize rabbit-sized weapons of mass destruction and outfit our furry friends with them in case they need to go on bloody revenge sprees.  If Jazz Jackrabbit v Tortoises Everywhere wasn’t support enough, I suggest you review the more recent file on Prince Ash v The Monsters of Hell, codenamed Hell Yeah! Wrath of the Dead Rabbit.

The defendant—dark rabbit lord of the underworld, Prince Ash—was unknowingly photographed while bathing with his rubbery friend, Mr. Duckie.  These embarrassing photos were then posted on the “Hellternet” and viewed 100 times, leading Ash to the conclusion that he needs to (re)kill the 100 inhabitants of Hell who had seen them, and retrieve the photos from whichever monster was foolish enough to play paparazzo.

Luckily for Ash, as dark prince and ruler of Hell, he has access to some pretty serious weaponry to make his killing spree easier (and more fun).  His default weapon, the saw wheel, is almost always with him, tearing apart small creatures and digging through patches of crystal, stone, and even lava to open up new paths through Hell.  Killing larger enemies, like the 100 monsters on Ash’s hit list, requires stronger firepower.  That’s where his missile launcher, machine gun, bazooka, shotgun, revolver, and grenades come in.  Each weapon is used simultaneously with the saw and quickly swapped for a different gun with a flick of the scroll wheel.  Some monsters require a more puzzle-like demise when shooting proves ineffective, in which Ash will drop crates on their head or flambé them with a nearby lava geyser.

Just shooting, crushing, or roasting enemies alive isn’t enough for Ash’s retribution: each of the 100 voyeuristic monsters also receives a special “finishing move” to punctuate their demise.  This move is achieved via a short mini-game that pops up once the monster’s health reaches zero, such as stealing honey from a beehive to kill off “Bomber Bee” or answering a trivia question to get the best of “Thoughtwave,” the giant, electrical brain.  The moves themselves also vary, from blasting the mini-boss with a giant laser beam, to using luchador moves to supplex them into nothingness.

There are moments of less killing, such as the Prison Zone, when Ash is weapon-free and must utilize his innate platforming skills, like double- and wall-jumping.  These abilities are not available when Ash is toting around the giant saw, introducing a variety of techniques to make your way around the depths of Hell.

Of course, Ash doesn’t have all of these weapons and abilities available at the start of his quest.  Because the underworld of Hell Yeah! is organized in “Metroidvania” fashion, each zone contains areas that are inaccessible upon first visit and must be returned to when more powerful equipment has been unlocked.  There are also “Hell Doors” that will only open once you’ve “captured” a certain number of the 100 monsters Ash is hunting, which results in a more linear experience than a game like Symphony of the Night.  Fortunately, this also means less backtracking and getting lost. 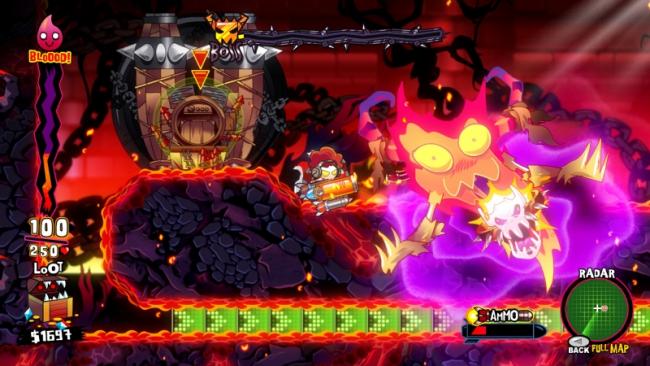 Any jurors who are not turned off by Ash’s bloodthirsty rampage will be pleased to see the world of Hell Yeah! is extremely self-referential, as a game itself.  Tutorial portions are begrudgingly encountered with comments like, “Any more annoying tutorial stuff?” shops encourage you to “waste money,” and boss battles are acknowledged by Ash himself: “It’s a boss fight… I don’t get to see the next zone unless I defeat you.”  Well-traveled gamers will recognize plenty of video game canon incorporated as well, from the mocking descriptions of defeated monsters, like “Eyevader”:  “Evil monster: check.  Impenetrable armour?  Check.  Inexplicable tendency to open up aforesaid armour at regular, predictable intervals to allow enemies a free shot inside?  Hell, bad guys are such morons…” to Mortal Kombat-reminiscent pop-ups that shout “Roasted!” after you’ve burned a baddie, to a casino level that is eerily nostalgic for a certain Sonic the Hedgehog 2 zone…

Hell Yeah! is full of these little in-jokes and surprises, which elevate it from an amazing and quirky gameplay experience to a fully fleshed-out adventure.  Different outfits and skins are purchasable with in-game currency from the same stores that sell guns, allowing you to customize Ash and his saw blade (such as “Mafioso Ash” and “inflatable duck ring” saw).  Monsters you have “captured” will be sent to The Island, a mini-game accessible from the menu that allows your monsters to work for you to earn extra money, life, and bonuses for the main story itself.  These extras, and others—like playing slot machines at the casino, piloting a bunny bathysphere while underwater, and completing gameplay-specific missions—keep the game fresh and unexpected. 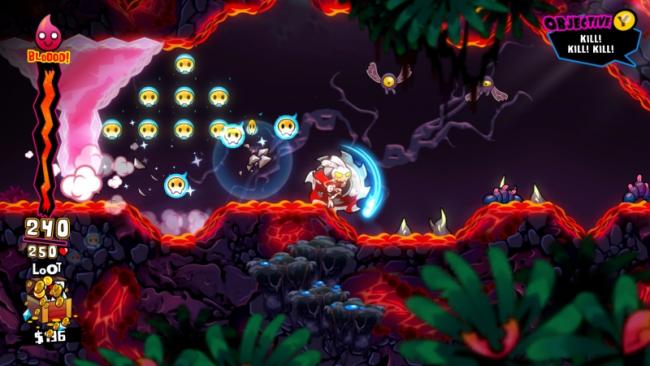 With so much to see, do, and kill, the underworld can be a little overwhelming at times.  Graphically, the world of Hell Yeah! is extremely bright, colorful, and busy, making differentiating between background and baddies something of a learning experience.  The (Metroid-esque) bombs dropped by some smaller enemies often blend into the surrounding environment, while giant electrical motors—which reek of insta-death—are actually only for show.  These visual nuances are figured out with time, but can result in a few confusing moments early in the game.

No matter your stance on outfitting rabbits with guns, you have to admit that Ash’s murderous adventure through the depths of Hell will only encourage other, impressionable young bunnies to do the same.  With such a fun, hilarious, and engaging rendition of his experience available by playing Hell Yeah! Wrath of the Dead Rabbit, we are encouraging all members of the rabbit youth to follow his example.  Vote no on Prop 415, or God help us all.